Selecting the Best: Evolutionary Engineering of Chemical Production in Microbes

Zero-growth processes are a promising strategy for the production of reduced molecules and depict a steady transition from aerobic to anaerobic conditions. To investigate the adaptation of Corynebacterium glutamicum to altering oxygen availabilities, we conceived a triple-phase fermentation process that describes a gradual reduction of dissolved oxygen with a shift from aerobiosis via microaerobiosis to anaerobiosis. The distinct process phases were clearly bordered by the bacteria’s physiologic response such as reduced growth rate, biomass substrate yield and altered yield of fermentation products. During the process, sequential samples were drawn at six points and analyzed via RNA-sequencing, for metabolite concentrations and for enzyme activities. We found transcriptional alterations of almost 50% (1421 genes) of the entire protein coding genes and observed an upregulation of fermentative pathways, a rearrangement of respiration, and mitigation of the basic cellular mechanisms such as transcription, translation and replication as a transient response related to the installed oxygen dependent process phases. To investigate the regulatory regime, 18 transcriptionally altered (putative) transcriptional regulators were deleted, but none of the deletion strains showed noticeable growth kinetics under an oxygen restricted environment. However, the described transcriptional adaptation of C. glutamicum resolved to varying oxygen availabilities provides a useful basis for future process and strain engineering. View Full-Text
Keywords: Corynebacterium glutamicum; transcriptional response; aerobiosis; microaerobiosis; anaerobiosis; triple-phase process Corynebacterium glutamicum; transcriptional response; aerobiosis; microaerobiosis; anaerobiosis; triple-phase process
►▼ Show Figures 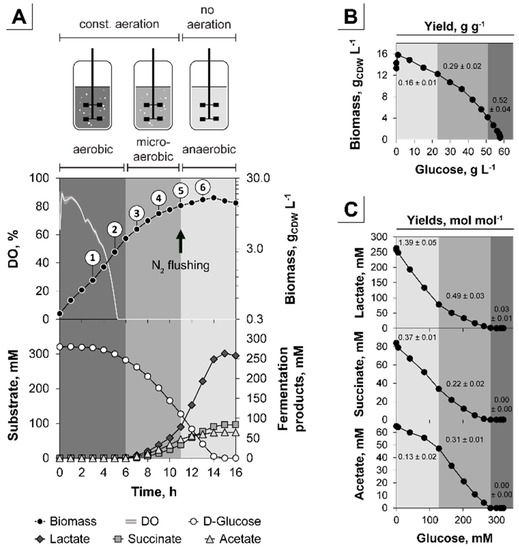