De Novo Transcriptome Assembly and Characterization of the Synthesis Genes of Bioactive Constituents in Abelmoschus esculentus (L.) Moench
Next Article in Special Issue

DNA methyltransferases (MTases), which catalyze the methylation of adenine and cytosine bases in DNA, can occur in bacteria and archaea alongside cognate restriction endonucleases (REases) in restriction-modification (RM) systems or independently as orphan MTases. Although DNA methylation and MTases have been well-characterized in bacteria, research into archaeal MTases has been limited. A previous study examined the genomic DNA methylation patterns (methylome) of the halophilic archaeon Haloferax volcanii, a model archaeal system which can be easily manipulated in laboratory settings, via single-molecule real-time (SMRT) sequencing and deletion of a putative MTase gene (HVO_A0006). In this follow-up study, we deleted other putative MTase genes in H. volcanii and sequenced the methylomes of the resulting deletion mutants via SMRT sequencing to characterize the genes responsible for DNA methylation. The results indicate that deletion of putative RM genes HVO_0794, HVO_A0006, and HVO_A0237 in a single strain abolished methylation of the sole cytosine motif in the genome (Cm4TAG). Amino acid alignments demonstrated that HVO_0794 shares homology with characterized cytosine CTAG MTases in other organisms, indicating that this MTase is responsible for Cm4TAG methylation in H. volcanii. The CTAG motif has high density at only one of the origins of replication, and there is no relative increase in CTAG motif frequency in the genome of H. volcanii, indicating that CTAG methylation might not have effectively taken over the role of regulating DNA replication and mismatch repair in the organism as previously predicted. Deletion of the putative Type I RM operon rmeRMS (HVO_2269-2271) resulted in abolished methylation of the adenine motif in the genome (GCAm6BN6VTGC). Alignments of the MTase (HVO_2270) and site specificity subunit (HVO_2271) demonstrate homology with other characterized Type I MTases and site specificity subunits, indicating that the rmeRMS operon is responsible for adenine methylation in H. volcanii. Together with HVO_0794, these genes appear to be responsible for all detected methylation in H. volcanii, even though other putative MTases (HVO_C0040, HVO_A0079) share homology with characterized MTases in other organisms. We also report the construction of a multi-RM deletion mutant (ΔRM), with multiple RM genes deleted and with no methylation detected via SMRT sequencing, which we anticipate will be useful for future studies on DNA methylation in H. volcanii. View Full-Text
Keywords: haloarchaea; Halobacteria; Haloferax volcanii; DNA methylation; methylation; methylome; restriction-modification system; CTAG methylation; GATC methylation haloarchaea; Halobacteria; Haloferax volcanii; DNA methylation; methylation; methylome; restriction-modification system; CTAG methylation; GATC methylation
►▼ Show Figures 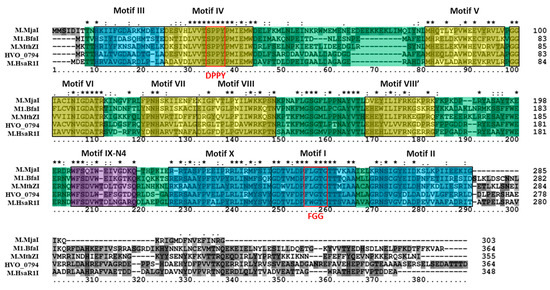