Archaeal Viruses from High-Temperature Environments
Next Article in Special Issue

Resolving the Enigma of the Clonal Expansion of mtDNA Deletions

Mitochondria are cell organelles that are special since they contain their own genetic material in the form of mitochondrial DNA (mtDNA). Damage and mutations of mtDNA are not only involved in several inherited human diseases but are also widely thought to play an important role during aging. In both cases, point mutations or large deletions accumulate inside cells, leading to functional impairment once a certain threshold has been surpassed. In most cases, it is a single type of mutant that clonally expands and out-competes the wild type mtDNA, with different mutant molecules being amplified in different cells. The challenge is to explain where the selection advantage for the accumulation comes from, why such a large range of different deletions seem to possess this advantage, and how this process can scale to species with different lifespans such as those of rats and man. From this perspective, we provide an overview of current ideas, present an update of our own proposal, and discuss the wider relevance of the phenomenon for aging.
Keywords: aging; mitochondrial deletion mutants; model of clonal expansion aging; mitochondrial deletion mutants; model of clonal expansion

Aging involves a gradual decline of an organism’s functional status, leading to an increasing risk of death with chronological age. In view of the growing life expectancy of modern societies [1] and the strain it places on existing health care and pension systems, it becomes ever more important to understand the biochemical mechanisms of this deteriorating process. An intriguing hallmark of aging in mammals is the appearance of cells carrying significant burdens of mitochondrial DNA (mtDNA) mutants [2,3,4,5,6,7,8]. Unlike the mtDNA mutations which cause inherited diseases, those associated with aging appear to be somatically acquired. Within a given tissue, there is often considerable heterogeneity in the burden of mtDNA mutations, such that affected cells co-exist side by side with healthy cells that carry few, if any, mutations. Furthermore, the frequency of affected cells tends to increase with age and there is evidence that within individual cells, the mitochondrial population is commonly overtaken by a single mutant type, very often a deletion in which a part of the normal mtDNA genome has been lost. The precise mutations tend to differ from one affected cell to another, suggesting that individual mtDNA mutations arise at random. How these mtDNA mutations undergo clonal expansion is a question of longstanding interest. The possibilities that they multiply either because of a so-called vicious cycle such that defective mitochondria simply generate more reactive oxygen species (ROS), which in turn cause more mutations, or because of random drift, have both been considered but found to be unsatisfactory [9,10]. Instead, it seems most likely that new mtDNA mutations are acted upon by some form of intracellular selection, causing the expansion of a clone of mutant mitochondria that may come to dominate or entirely exclude the wild type population. Understanding the nature of the selection force that drives such clonal expansion is therefore an important challenge in addressing the causes and consequences of mtDNA mutations within the context of the aging of the animal as a whole.
The role of selection in affecting how the frequency of mtDNA deletions changes over time will be influenced by several factors [11]. Firstly, there are typically thousands of mtDNA molecules per cell. Secondly, these mtDNA molecules are distributed among many mitochondria, which undergo processes of duplication and removal that operate independently of cellular divisions. Thirdly, the mitochondria themselves are dynamic organelles that undergo frequent cycles of fusion and fission. Collectively, these factors create a complex evolutionary context wherein any selective advantage or disadvantage of individual mtDNA mutations, operating over rapid timescales, can produce interesting results.
Among the various possibilities to account for a selective advantage favoring mtDNA deletions are that: (i) in a cell where wild type and deleted mtDNA molecules co-exist, there may be a selection advantage for deletion mutants since they have a smaller genome size, which might result in a shorter replication time [12,13,14]; (ii) if mitochondria that are compromised by a high burden of mutations have a slower rate of metabolism, they may be less damaged by ROS and so relatively spared from deletion by mitophagy, thereby resulting in survival-based selection through a process that has been termed survival of the slowest [15]; (iii) the selection advantage of mtDNA deletions might be based on features relating to some aspect of the machinery for mtDNA replication, of which several possibilities exist, at least hypothetically [11]. Whichever mechanism might be at work, it is essential that it can be shown to work quantitatively, since the process of selection is in essence a numbers game. Possibility (i) has been closely examined but found to be implausible [16], chiefly because the time required for replication of an mtDNA molecule is only a tiny fraction (<1%) of the half-life of mtDNA, which drastically diminishes any scope for a size-based replication advantage to be important. Possibility (ii) has also been found to be unlikely, since not only is it incompatible with mitochondrial dynamics [17], but it also appears that dysfunctional mitochondria are degraded preferentially rather than more slowly than intact ones [18,19,20,21].
By a process of elimination, it appears probable, therefore, that the enigma of clonal expansion of mtDNA deletions requires explanation in terms of the machinery for DNA replication. Recently, we noticed that when the locations of mtDNA deletions, which had been reported from rats, rhesus monkeys, and humans, were compared, there was a stretch of mtDNA that was overlapped in nearly every instance [10]. Based on this observation and noting that the primer required for DNA replication is provided by processing an mRNA transcript, we suggested a novel mechanism based on this intimate connection of transcription and replication in mitochondria. If a product inhibition mechanism exists that downregulates the transcription rate if sufficient components for the respiration chain exist, then deletion events removing a region of the genome involved in this feedback-loop would confer to such deletion mutants a higher rate of replication priming, leading to a substantial selection advantage (Figure 1). In this article, we report additional data from mice that are strongly consistent with our previous analysis of rats, monkeys, and humans, and we further examine the implications of the hypothesis that a shared sequence, falling within the common overlap of these many individual deletions, might throw light on the underlying mechanism for clonal expansion.

A.K. and T.B.L.K. conceived and wrote the paper. 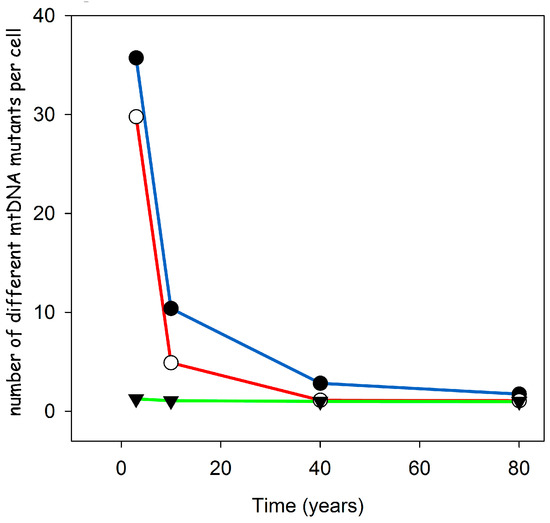