Scaffolding for Repair: Understanding Molecular Functions of the SMC5/6 Complex

The purpose of this study was to investigate whether the moss Physcomitrella patens cells are more resistant to ionizing radiation than animal cells. Protoplasts derived from P. patens protonemata were irradiated with γ-rays of 50–1000 gray (Gy). Clonogenicity of the protoplasts decreased in a γ-ray dose-dependent manner. The dose that decreased clonogenicity by half (LD50) was 277 Gy, which indicated that the moss protoplasts were 200-times more radioresistant than human cells. To investigate the mechanism of radioresistance in P. patens, we irradiated protoplasts on ice and initial double-strand break (DSB) yields were measured using the pulsed-field gel electrophoresis assay. Induced DSBs linearly increased dependent on the γ-ray dose and the DSB yield per Gb DNA per Gy was 2.2. The DSB yield in P. patens was half to one-third of those reported in mammals and yeasts, indicating that DSBs are difficult to induce in P. patens. The DSB yield per cell per LD50 dose in P. patens was 311, which is three- to six-times higher than those in mammals and yeasts, implying that P. patens is hyperresistant to DSBs. Physcomitrella patens is indicated to possess unique mechanisms to inhibit DSB induction and provide resistance to high numbers of DSBs. View Full-Text
Keywords: moss; Physcomitrella patens; protoplasts; γ-rays; radiosensitivity; DNA double-strand breaks; pulsed-field gel electrophoresis moss; Physcomitrella patens; protoplasts; γ-rays; radiosensitivity; DNA double-strand breaks; pulsed-field gel electrophoresis
►▼ Show Figures 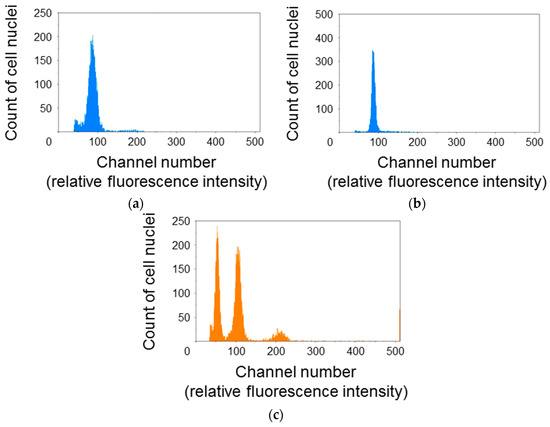