DNA Aptamers for the Functionalisation of DNA Origami Nanostructures

Inverted cuttings of Populus yunnanensis remain alive by rooting from the original morphological apex and sprouting from the base, but the lateral branches exhibit less vigorous growth than those of the upright plant. In this study, we examined the changes in hormone contents, oxidase activities, and transcriptome profiles between upright and inverted cuttings of P. yunnanensis. The results showed that the indole-3-acetic acid (IAA) and gibberellic acid (GA3) contents were significantly lower in inverted cuttings than in upright cuttings only in the late growth period (September and October), while the abscisic acid (ABA) level was always similar between the two direction types. The biosynthesis of these hormones was surprisingly unrelated to the inversion of P. yunnanensis during the vegetative growth stage (July and August). Increased levels of peroxidases (PODs) encoded by 13 differentially expressed genes (DEGs) served as lignification promoters that protected plants against oxidative stress. Kyoto encyclopedia of genes and genomes (KEGG) enrichment analysis showed that most DEGs (107) were related to carbohydrate metabolism. Furthermore, altered activities of uridine diphosphate (UDP)-sugar pyrophosphorylase (USP, 15 DEGs) for nucleotide sugars, pectin methylesterase (PME, 7 DEGs) for pectin, and POD (13 DEGs) for lignin were important factors in the response of the trees to inversion, and these enzymes are all involved cell wall metabolism. View Full-Text
Keywords: Populus yunnanensis; inversion; cell wall; endogenous hormone; oxidase; transcriptome profiling Populus yunnanensis; inversion; cell wall; endogenous hormone; oxidase; transcriptome profiling
►▼ Show Figures 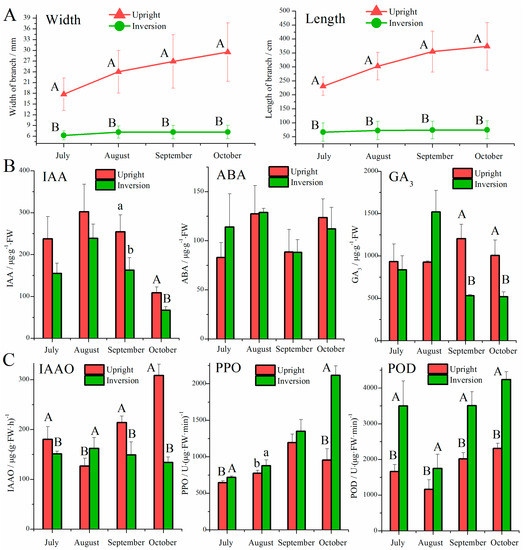