Evolution of Karyotypes in Chameleons

Evolutionary Dynamics of the W Chromosome in Caenophidian Snakes

The caenophidian (assigned also as “advanced”) snakes are traditionally viewed as a group of reptiles with a limited karyotypic variation and stable ZZ/ZW sex chromosomes. The W chromosomes of the caenophidian snakes are heterochromatic, and pioneering studies demonstrated that they are rich in repetitive elements. However, a comparative study of the evolutionary dynamics of the repetitive content of the W chromosome across the whole lineage is missing. Using molecular-cytogenetic techniques, we explored the distribution of four repetitive motifs (microsatellites GATA, GACA, AG and telomeric-like sequences), which are frequently accumulated in differentiated sex chromosomes in vertebrates, in the genomes of 13 species of the caenophidian snakes covering a wide phylogenetic spectrum of the lineage. The results demonstrate a striking variability in the morphology and the repetitive content of the W chromosomes even between closely-related species, which is in contrast to the homology and long-term stability of the gene content of the caenophidian Z chromosome. We uncovered that the tested microsatellite motifs are accumulated on the degenerated, heterochromatic W chromosomes in all tested species of the caenophidian snakes with the exception of the Javan file snake representing a basal clade. On the other hand, the presence of the accumulation of the telomeric-like sequences on the caenophidian W chromosome is evolutionary much less stable. Moreover, we demonstrated that large accumulations of telomeric-like motifs on the W chromosome contribute to sexual differences in the number of copies of the telomeric and telomeric-like repeats estimated by quantitative PCR, which might be confusing and incorrectly interpreted as sexual differences in telomere length. View Full-Text
Keywords: heterochromatin; sex chromosomes; GATA; telomeres; microsatellites; FISH heterochromatin; sex chromosomes; GATA; telomeres; microsatellites; FISH
►▼ Show Figures 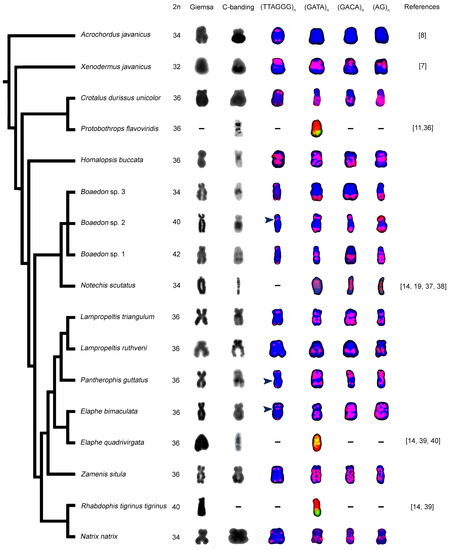