Scaffolding for Repair: Understanding Molecular Functions of the SMC5/6 Complex

Phytochemical analysis of different Euphorbia tirucalli tissues revealed a contrasting tissue-specificity for the biosynthesis of euphol and β-sitosterol, which represent the two pharmaceutically active steroids in E. tirucalli. To uncover the molecular mechanism underlying this tissue-specificity for phytochemicals, a comprehensive E. tirucalli transcriptome derived from its root, stem, leaf and latex was constructed, and a total of 91,619 unigenes were generated with 51.08% being successfully annotated against the non-redundant (Nr) protein database. A comparison of the transcriptome from different tissues discovered members of unigenes in the upstream steps of sterol backbone biosynthesis leading to this tissue-specific sterol biosynthesis. Among them, the putative oxidosqualene cyclase (OSC) encoding genes involved in euphol synthesis were notably identified, and their expressions were significantly up-regulated in the latex. In addition, genome-wide differentially expressed genes (DEGs) in the different E. tirucalli tissues were identified. The cluster analysis of those DEGs showed a unique expression pattern in the latex compared with other tissues. The DEGs identified in this study would enrich the insights of sterol biosynthesis and the regulation mechanism of this latex-specificity. View Full-Text
Keywords: Euphorbia tirucalli; oxidosqualene cyclase; transcriptome; steroid Euphorbia tirucalli; oxidosqualene cyclase; transcriptome; steroid
►▼ Show Figures 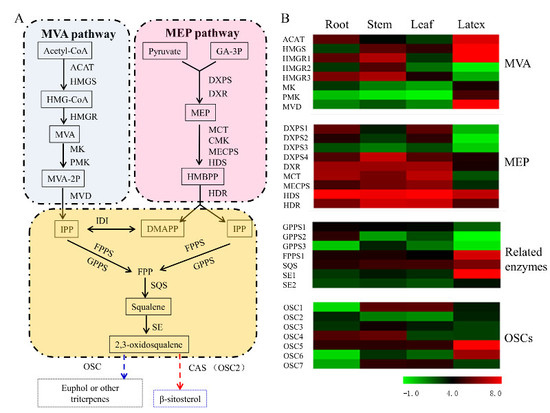