Mitochondria and α-Synuclein: Friends or Foes in the Pathogenesis of Parkinson’s Disease?

Parkinson’s disease (PD), the most common neurodegenerative movement disorder, is characterized by a variety of premotor signs, as well as typical motor symptoms, such as resting tremor, rigidity, bradykinesia and postural reflex impairment. A key neuropathological hallmark of PD is the progressive loss of nigrostriatal dopaminergic neurons, which is thought to begin from synaptic terminal degeneration [1]. In addition, the brain of affected patients exhibits the presence of proteinaceous inclusions, named Lewy bodies (LB) and Lewy neuritis (LN), mainly composed of fibrillary aggregated α-synuclein [2]. To date, pathological inclusions containing α-synuclein, either in the form of LB and LN or others, are typical of a series of neurodegenerative disorders, including dementia with LB (DLB), multiple system atrophy (MSA), LB dysphagia, Alzheimer's disease (AD) and its LB variant (LBVAD), as well as neurodegeneration with brain iron accumulation type-1 (NBIA-1) [3,4,5]. These are commonly referred as synucleinopathies.
For many years, the severity and the duration of motor symptoms in PD has been thought to directly correlate with the rate of neuronal cell loss in the substantia nigra pars compacta (SNpc) [6]. Nonetheless, recent compelling evidence supports that synaptic and axonal degeneration might be the crucial early pathological events underlying symptom onset and initiating nigrostriatal neuron loss in PD [7,8]. In this context, the massive amount of insoluble α-synuclein observed at striatal dopaminergic terminals, which is orders of magnitude higher than those detected in LB [9], hints that synapses may even be the primary site of accumulation of α-synuclein. These findings support that the deposition of insoluble α-synuclein at the presynaptic endings of nigrostriatal neurons may constitute the primum movens for the retrograde pattern of degeneration.
This notwithstanding, the mechanisms through which α-synuclein accumulation drives dopaminergic neuronal cell death are still enigmatic. Among the possible mechanisms involved in neurodegeneration in PD, there are alterations of protein degradation systems, synaptic failure and collapse and mitochondrial dysfunction [10,11].
Nigrostriatal neurons show large axonal lengths with an enormous number of synapses [12,13]. For this reason, they require a gargantuan energy demand as they also need to bolster their intrinsically elevated electrical excitability [13]. This hypothesis is sustained by evidence showing that mitochondrial oxidative stress is higher in the axons of nigrostriatal dopaminergic neurons rather than in those of noradrenergic neurons of the ventral tegmental area. Consistently, the reduction of nigrostriatal neuronal arborization decreases the phenomenon of mitochondrial oxidative phosphorylation and neuron vulnerability [14]. However, multiple factors, such as broad spikes, pacemaking, low intrinsic Ca2+ buffering, cytosolic Ca2+ oscillations and dopamine oxidation, need to occur simultaneously in order to render dopaminergic neurons vulnerable to α-synuclein/mitochondrial dysfunction-linked neurodegeneration [13,15]. Therefore, the dichotomy between the exact contribution of α-synuclein deposition and mitochondria dysfunction to dopaminergic neurons degeneration still constitutes an issue to be solved.

2. Parkinson Disease α-Synuclein’s Pathology and Its Relation with Neuronal Degeneration

Numerous studies indicate α-synuclein as the major agent in PD pathophysiology [16,17]. In particular, α-synuclein aggregation may be the main cause of synaptic dysfunction and of the associated neurodegeneration [9,18]. A large amount of α-synuclein within LB is truncated at the C-terminal domain [19,20,21]. Of note, truncated α-synuclein has a higher propensity to aggregate when compared to either wild-type (wt) or mutated forms of the protein [22]. Moreover, even modifications of C-terminal domain may increase the propensity of the protein to aggregate [23,24]. The centrality of α-synuclein in the pathogenesis of PD is further supported by the fact that patients showing multiplication or missense mutations in α-synuclein gene (SNCA), such as E46K, A30P and A53T [25], develop early onset forms of PD characterized by peculiar clinical and histopathological features [26,27].
However, 90% of PD cases manifest with sporadic onset, thus implying that multiple factors contribute to α-synuclein accumulation in this disorder. Emerging data from human and animal models of PD highlight a role for α-synuclein in the control of neuronal mitochondrial dynamics [28,29]. The effect of overexpression of α-synuclein on mitochondrial functions has been investigated in human wt, mutated or truncated α-synuclein transgenic mice, even when generated by the use of viral vectors, where α-synuclein accumulation has been found to result in different PD-like phenotypes [30,31,32].
However, even if brain α-synuclein deposition is thought to constitute a central event in the pathogenesis of PD, α-synuclein pathology is not confined within the nigrostriatal system in the brain of affected subjects. LB or LB-like aggregates composed of α-synuclein have been found to accumulate in the peripheral nervous system and in the dorsal root ganglia of PD patients [33,34,35]. Moreover, α-synuclein accumulation within the peripheral nervous system can also occur in neurologically intact aged individuals [36]. For this reason, PD and aging have been proposed to be a unique entity, with patients manifesting PD when pathological alterations and neurodegeneration overwhelm a critical threshold. Indeed, neuropathological accumulation of LB has been detected in the post-mortem brains of non-parkinsonian aged subjects, so that it has been suggested that, if they had lived long enough, they would have developed PD or other forms of parkinsonism [37]. This idea fits with the recently introduced threshold theory of PD, according to which α-synuclein deposition presents a widespread distribution, and may increase predisposition to the onset of prodromal premotor or motor symptoms by inducing the impairment or loss of distinct populations of peripheral or central neurons [38]. In particular, PD preclinical and clinical symptoms would occur only when the distinct functional reserves of neurons became no longer able to support their actions. In this context, the onset of motor symptoms originating from α-synuclein accumulation at nigrostriatal neurons would be delayed, when compared to that the prodromal signs related to α-synuclein increase in peripheral neurons. This can be ascribed to a larger functional reserve of SNpc neurons coupled to that of basal ganglia circuits. However, the above-cited dopaminergic cell-autonomous risk factors can contribute to the selective loss of brain nigrostriatal neurons [39].

PD prevalence clearly increases along with aging, therefore the age-related progressive accumulation of molecular damage, which is associated with an impairment of proteasome activity, autophagy and mitochondrial dysfunction [40,41], is thought to be relevant during disease onset. Mitochondrial deficits have largely been described as crucial pathogenic events in the pathogenesis of PD [28,29]. The first evidence supporting the involvement of mitochondria dysfunction in PD pathogenesis was complex I deficiency and impaired activity in the SNpc of patients [42,43]. Later on, complex I deficiency was found to be associated with the oxidation of complex I subunits and the consequent increase of reactive oxygen species (ROS) production and oxidative damage [44]. Other authors reported reduced complex I activity in the skeletal muscle [45,46] and platelets of PD patients [47,48], supporting the hypothesis that systemic mitochondria alterations are implicated in PD. Along the same lines, cultured fibroblasts isolated from PD patients display impaired oxidative decarboxylation of pyruvate [49]. Complex I is composed by a large number of mitochondrial and nuclear DNA-encoded subunits that are damaged in PD patients [50]. Interestingly, polymorphisms in mitochondrial DNA-encoded complex I have been found to constitute susceptibility factors for PD [51], and mitochondrial DNA mutations can cause parkinsonism-like alterations in mitochondrial DNA polymerase γ [52].
Neurotoxins inhibiting mitochondrial complex I, such as 1-methyl-4-phenyl-1,2,3,6-tetrahydropyridine (MPTP) and rotenone, have been used to induce oxidative damage and parkinsonian-like symptoms in various animal models of PD [31]. Moreover, the lack of the NADH:ubiquinone oxidoreductase iron-sulfur protein 4 (Ndufs4) subunit of complex I decreases dopamine release in animal models and induces a higher vulnerability to MPTP [53].
Finally, mutations in genes encoding mitochondrial-related proteins such as DJ-1 and PINK-1 have been associated with the onset of familial forms of PD [54]. 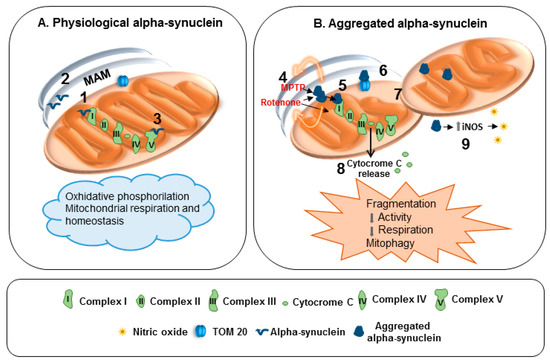