Context-Dependent Role of IKKβ in Cancer

Dualistic Role of BARD1 in Cancer

BRCA1 Associated RING Domain 1 (BARD1) encodes a protein which interacts with the N-terminal region of BRCA1 in vivo and in vitro. The full length (FL) BARD1 mRNA includes 11 exons and encodes a protein comprising of six domains (N-terminal RING-finger domain, three Ankyrin repeats and two C-terminal BRCT domains) with different functions. Emerging data suggest that BARD1 can have both tumor-suppressor gene and oncogene functions in tumor initiation and progression. Indeed, whereas FL BARD1 protein acts as tumor-suppressor with and without BRCA1 interactions, aberrant splice variants of BARD1 have been detected in various cancers and have been shown to play an oncogenic role. Further evidence for a dualistic role came with the identification of BARD1 as a neuroblastoma predisposition gene in our genome wide association study which has demonstrated that single nucleotide polymorphisms in BARD1 can correlate with risk or can protect against cancer based on their association with the expression of FL and splice variants of BARD1. This review is an overview of how BARD1 functions in tumorigenesis with opposite effects in various types of cancer. View Full-Text
Keywords: BARD1; tumor suppressor; genetic variants; cancer predisposition BARD1; tumor suppressor; genetic variants; cancer predisposition
►▼ Show Figures 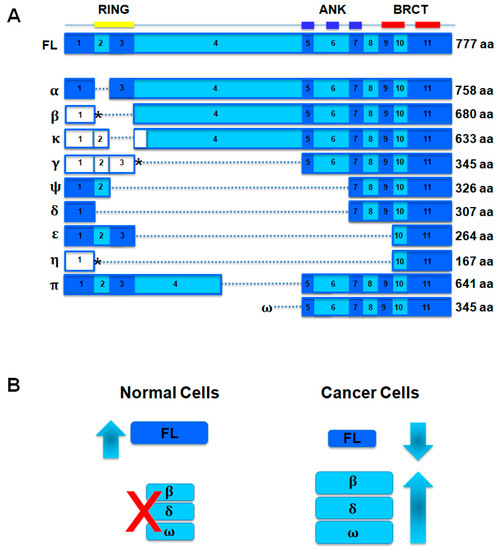