Dendrobium officinale is an extremely valuable orchid used in traditional Chinese medicine, so sought after that it has a higher market value than gold. Although the expression profiles of some genes involved in the polysaccharide synthesis have previously been investigated, little research has been carried out on their alternatively spliced isoforms in D. officinale. In addition, information regarding the translocation of sugars from leaves to stems in D. officinale also remains limited. We analyzed the polysaccharide content of D. officinale leaves and stems, and completed in-depth transcriptome sequencing of these two diverse tissue types using second-generation sequencing (SGS) and single-molecule real-time (SMRT) sequencing technology. The results of this study yielded a digital inventory of gene and mRNA isoform expressions. A comparative analysis of both transcriptomes uncovered a total of 1414 differentially expressed genes, including 844 that were up-regulated and 570 that were down-regulated in stems. Of these genes, one sugars will eventually be exported transporter (SWEET) and one sucrose transporter (SUT) are expressed to a greater extent in D. officinale stems than in leaves. Two glycosyltransferase (GT) and four cellulose synthase (Ces) genes undergo a distinct degree of alternative splicing. In the stems, the content of polysaccharides is twice as much as that in the leaves. The differentially expressed GT and transcription factor (TF) genes will be the focus of further study. The genes DoSWEET4 and DoSUT1 are significantly expressed in the stem, and are likely to be involved in sugar loading in the phloem. View Full-Text
Keywords: Dendrobium officinale; single-molecule real-time sequence; SMRT; second-generation sequence; SGS; polysaccharide; sugar transporter; alternative splicing Dendrobium officinale; single-molecule real-time sequence; SMRT; second-generation sequence; SGS; polysaccharide; sugar transporter; alternative splicing
►▼ Show Figures 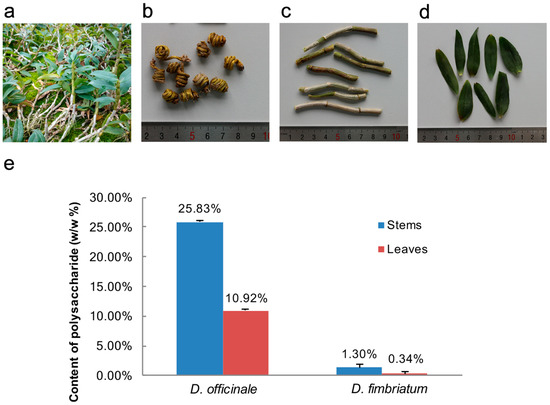