Somatic Mosaicism in the Human Genome
Previous Article in Journal

Long non-coding (lnc) RNAs serve a multitude of functions in cells. NEAT1 RNA is a highly abundant 4 kb lncRNA in nuclei, and coincides with paraspeckles, nuclear domains that control sequestration of paraspeckle proteins. We examined NEAT1 RNA levels and its function in 3T3-L1 cells during differentiation to adipocytes. Levels of NEAT1 transcript, measured by RT-PCR, fluctuated in a temporal manner over the course of differentiation that suggested its role in alternative splicing of PPARγ mRNA, the major transcription factor driving adipogenesis. When cells were induced to differentiate by a media cocktail of insulin, dexamethasone, and isobutylmethyxanthine (IBMX) on Day 0, NEAT1 levels dropped on Day 4, when the PPARγ2 variant was spliced and when terminal differentiation occurs The appearance of PPARγ2 coordinates with the PPARγ1 variant to drive differentiation of adipocytes. SiRNA used to deplete NEAT1 resulted in the inability of cells to phosphorylate the serine/arginine-rich splicing protein, SRp40. SiRNA treatment for SRp40 resulted in dysregulation of PPARγ1 and, primarily, PPARγ2 mRNA levels. SRp40 associated with NEAT1, as shown by RNA-IP on days 0 and 8, but decreased on day 4, and concentrations increased over that of IgG control. Overexpression of SRp40 increased PPARγ2, but not γ1. Although lncRNA MALAT1 has been investigated in SR protein function, NEAT1 has not been shown to bind SR proteins for phosphorylation such that alternative splicing results. The ability of cells to increase phosphorylated SR proteins for PPARγ2 splicing suggests that fluxes in NEAT1 levels during adipogenesis regulate alternative splicing events. View Full-Text
Keywords: lncRNA; NEAT1; 3T3-L1 cells; adipogenesis; SR proteins lncRNA; NEAT1; 3T3-L1 cells; adipogenesis; SR proteins
►▼ Show Figures 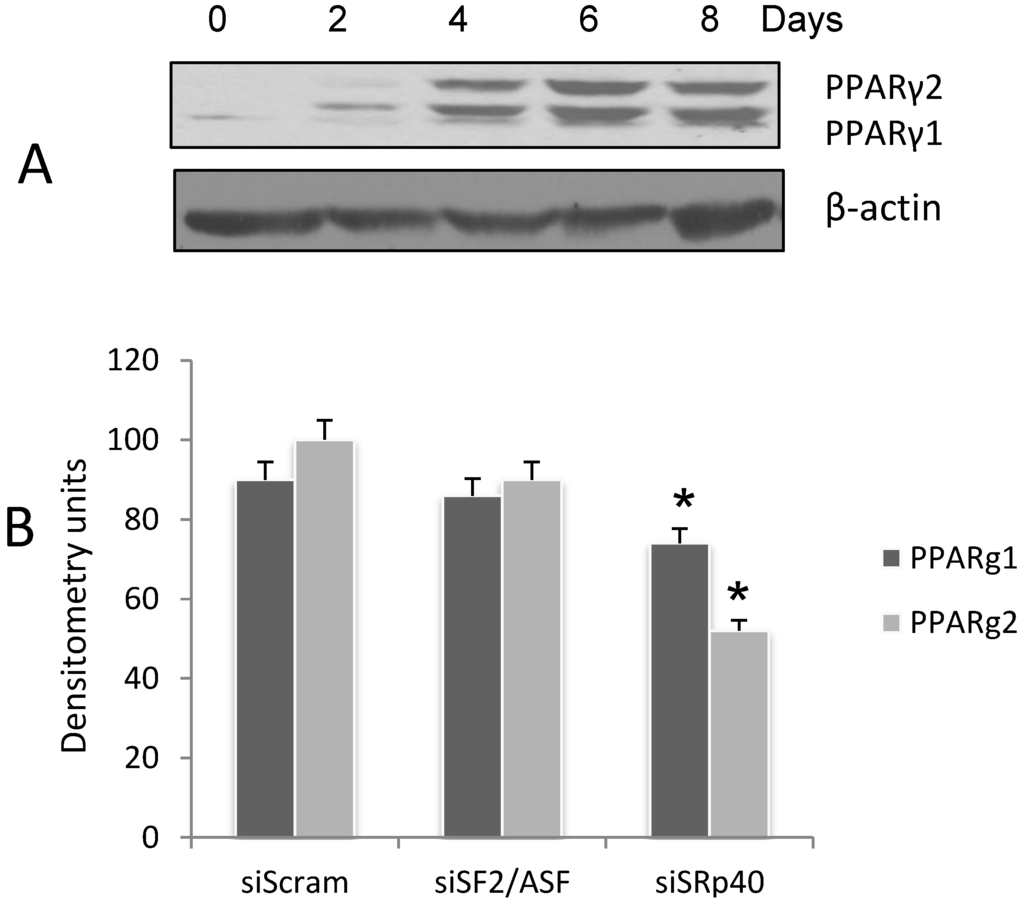