Analysis of the PRA1 Genes in Cotton Identifies the Role of GhPRA1.B1-1A in Verticillium dahliae Resistance
Previous Article in Special Issue

Methodologies for the De novo Discovery of Transposable Element Families

Relationships among laurasiatherian clades represent one of the most highly disputed topics in mammalian phylogeny. In this study, we attempt to disentangle laurasiatherian interordinal relationships using two independent genome-level approaches: (1) quantifying retrotransposon presence/absence patterns, and (2) comparisons of exon datasets at the levels of nucleotides and amino acids. The two approaches revealed contradictory phylogenetic signals, possibly due to a high level of ancestral incomplete lineage sorting. The positions of Eulipotyphla and Chiroptera as the first and second earliest divergences were consistent across the approaches. However, the phylogenetic relationships of Perissodactyla, Cetartiodactyla, and Ferae, were contradictory. While retrotransposon insertion analyses suggest a clade with Cetartiodactyla and Ferae, the exon dataset favoured Cetartiodactyla and Perissodactyla. Future analyses of hitherto unsampled laurasiatherian lineages and synergistic analyses of retrotransposon insertions, exon and conserved intron/intergenic sequences might unravel the conflicting patterns of relationships in this major mammalian clade.
Keywords: retrophylogenomics; exon concatenation; exon coalescence; Laurasiatheria; Scrotifera; anomaly zone retrophylogenomics; exon concatenation; exon coalescence; Laurasiatheria; Scrotifera; anomaly zone

We identified the genomic coordinates of retrotransposons in the genomes of the star-nosed mole, greater mouse-eared bat, horse, pig, and dog using a local version of the RepeatMasker (version 4.0.7) (http://www.repeatmasker.org/RepeatMasker/ (accessed on 28 March 2022)). We used the recently developed 2-n-way tool [43] to trace the presence or absence of retrotransposons of target species at orthologous genomic positions in query species. Pairwise 2-way whole-genome alignments were uploaded to the n-way module. Using standard n-way settings, we then performed an exhaustive, multi-directional screening for phylogenetically informative retrotransposon presence/absence patterns. To increase the accuracy of the analyses, we applied an n-way-embedded, MUSCLE-based optimization. We focused on two retrotransposon groups, LINE1s (3′-truncation < 50 nt) and LTRs (5′- and 3′-truncations ≤ 20 nt), which were verifiably active during the time of laurasiatherian diversification [36]. To evaluate all the potential tree topologies of the investigated laurasiatherian lineages, we searched for presence/absence patterns for all 25 possible interordinal affiliations (e.g., exclusive presence in bat + dog, bat + dog + pig, see Supplementary Table S1). From the n-way, we sampled all alignments of loci (diagnostic retrotransposons with 500-nt flanks) with perfect presence/absence patterns (distinct n-way (+) or (−) assignments). Each of these was then supplemented with a second species for every order (Supplementary Table S2) from genome assemblies of laurasiatherians available at the National Center for Biotechnology Information (NCBI, https://ncbi.nlm.nih.gov (accessed on 28 March 2022)), and UCSC Genome Browser Database (https://genome.ucsc.edu (accessed on 28 March 2022)). The second species helped reduce species-specific signals resulting from occasional instances of homoplasy [33]. As there is already strong evidence for the monophyly of Ferae (Carnivora + Pholidota) (e.g., [11,18,25,36,44]), we omitted pangolin from the initial computational screenings. However, we subsequently added sequence information of pangolins to the alignments. We also complemented all alignments with a representative of Euarchontoglires for outgroup comparison (Supplementary Table S2). Every individual alignment was manually analysed to verify orthology and presence/absence patterns. We accepted as phylogenetically informative markers only retrotransposon insertions at orthologous positions flanked by target site duplications (TSDs) shifted in their genomic location less than three nucleotides between different species, representing the same element type in the same orientation, and exhibiting a clear absence state in the outgroup. The alignments of retrotransposon markers are presented in Supplementary File S1. The table with the number of retrotransposon markers found for all possible laurasiatherian order affiliations and the presence/absence table of retrotransposon markers are presented as Supplementary Tables S1 and S2, respectively.

We built two presence/absence (1/0) data matrices for retrotransposon markers: one with markers found in the present screening and the other also including all the non-overlapping markers from Doronina et al. [36] (Supplementary File S2). The two matrices were analysed in SplitsTree (version 4.13.1, [45]) using neighbor-net analysis with standard settings and 1000 bootstrap replicates. SplitsTree allows for the visualization of data conflicts within a phylogenetic network. We also applied Dollo parsimony as implemented in the Dollop program in PHYLIP (version 3.695, Dollo and Polymorphism Parsimony [46]) to infer the most parsimonious tree with standard parameters and randomized input order of species (seven times to jumble, random seed “13131”). Dollop admits only one forward change to gain a character and minimizes the number of reversions to explain presence/absence patterns. Dollo parsimony outperformed other variants of parsimony in analyses of simulated retroelement datasets [47]. MrBayes v3.2.5 was applied for a Bayesian inference using the Standard Discrete Model (binary, i.e., 1/0 character states) and ctype (irreversible, originally used for morphological data) for all characters, e.g., ctype irreversible: 1–470, with datatype = standard, mcmc ngen = 20,000, samplefreq = 100, printfreq = 100, and diagnfreq = 1000 [48]. We also applied three ILS-aware MSC methods: ASTRAL_BP, ASTRID_BP, and SDPquartets [34,47]. Bootstrap analyses with the coalescence methods were performed with 1000 pseudoreplications.
To further identify phylogenetic relationships within Scrotifera, we built two additional datasets with and without the data of Doronina et al. [36] and omitted Eulipotyphla to apply the 4-lineage statistical test for diagnostic presence/absence markers (4-LIN, reverse algorithm, empirical distribution, [38]). This test is designed specifically for the presence/absence data of four-lineage phylogenetic relationships. 4-LIN also considers multiple hybridization scenarios and provides a tree/net with the highest log-likelihood values using an embedded χ2 test for the evaluation. To further analyse possible hybridization, we applied a Quartet-Asymmetry test [34] using the 470-dataset.

We generated sequence alignments for 9266 exons across 3911 genes and 47 mammal species (available at Figshare, https://figshare.com/s/b0bca1ca0f8328ec993a (accessed on 28 March 2022); most of the species used by Jebb et al. [25] were taken in the present analyses (Supplementary Figure S3); for the cow and cat, we used the updated bosTau9 and felCat9 assemblies, respectively). These high-quality exon sequence alignments were generated by filtering TOGA (https://github.com/hillerlab/TOGA/ (accessed on 28 March 2022)) annotations for intact exons of 1:1 orthologous genes that have an intact reading frame and that satisfy a minimum coverage of phylogeny-important species. We required here that each exon align to at least two primates, at least one representative of Rodentia and Lagomorpha, at least two representatives of Afrotheria and Xenarthra, one Pholidota, three Cetartiodactyla, three Carnivora, one Perissodactyla, five Chiroptera, and one Eulipotyphla. Split codons were trimmed, resulting in individual exon sequences that are a multiple of 3 bp. The median and average length of the exons is 114 and 137 bp. The exons ranged in length from 30–2271 bp. Both nucleotide and translated amino acid sequences were used in all downstream exon analyses (Supplementary Figure S1). The use of individual exons, rather than complete protein-coding sequences, greatly reduces the likelihood that these markers violate the ‘no intralocus recombination’ assumption of summary coalescence methods [28].

2.2.2. Inference of Best-Fit Models of Sequence Evolution and Exon Tree

We used ModelFinder [49] implemented in IQTREE2 [50] to determine the best-fit model of sequence evolution (SE) per gene per data type. For DNA, all nucleotide substitution models were explored, allowing for a variety of different rate-heterogeneity across sites (RHAS): a proportion of Invariant sites (+I), a discrete Gamma distribution with four rate categories (+G), a FreeRate model (+R), equal/homogenous rates (+E), and combined rates (I + G, I + R). The RHAS models are homotachous (i.e., every site is assumed to evolve at a fixed rate of change irrespective of which edge in the tree the sequence is evolving along (different sites may evolve at different rates of change)), a necessary requirement due to the presence of short exon alignments. For each model of SE investigated, we conducted a full tree search (using the -mtree option), rather than a default fixed starting tree, to prevent entrapment in local optima. All models of substitution were explored for each alignment of amino acids using the full set of RHAS models in addition to unlinked rates (*R, I*R). Optimal frequencies were inferred by comparing empirical frequencies (+F), maximum likelihood (ML)-optimized frequencies (+FO), and frequencies of the substitution model (+FU). The best-fit model of SE for each alignment was chosen based on the Bayesian Information Criterion (BIC) and used to infer an ML gene tree.

Alignments of both DNA and amino acids were concatenated into a supermatrix using FASconcat [51]. These concatenated datasets (length 1,271,235 bp and 423,745 amino acids) were used to infer the mammalian species tree using the ML method implemented in IQTREE2, partitioned by the best-fit model of SE per-gene, with 1000 bootstrap replicates generated using the ultrafast bootstrap approximation (UFBoot, [52]). The species tree under a coalescent model was inferred using individual gene trees (available at Figshare, https://figshare.com/s/b0bca1ca0f8328ec993a (accessed on 28 March 2022)) with ASTRAL [53] and all concatenated datasets with SVDquartets ([54], 500 bootstrap replicates). Polytomies that were arbitrarily resolved when using IQTREE2 to infer gene trees may impact quartet resolution. Therefore, we explored coalescent trees both with and without polytomies resolved. For all inferred gene trees, any edges with a length less than 0.01 substitutions per site were collapsed into polytomies using the ‘di2multi’ function in the R package ape [55]. Given the short length of some exons, all analyses were repeated using only alignments greater than 500 bp (n = 157 alignments). To test the fit of all gene trees to all species trees inferred, both Robinson–Foulds distances and tree topology tests between gene tree/species tree combinations were carried out using the Phangorn package in R [56] and topology tests in IQTREE2. Where gene trees contained fewer than 47 species, gene trees were compared to a pruned version of the species tree.

Our in-depth analyses of novel high-quality retrotransposon and exon data have revealed that biological processes such as rapid speciation and ILS may underpin phylogenetic conflict within Laurasiatheria. Although past analyses had already explored ILS and model misspecification as drivers of phylogenetic incongruence, the current analysis extends these considerations by using novel high-quality models of retrotransposons and exons, as well as extensive, in-depth analyses of these data. Unfortunately, our discordant results do not lay the laurasiatherian problem to rest, suggesting that adequate modelling of rapid branching events remains a challenge in phylogenomics. These “hard-nodes” still remain problematic, but attempting to resolve them using different data types (e.g., indels, intron sequences, viral inserts, and nuclear copies of mitochondrial DNA (numts)) and ILS- and hybridization-aware methods will stimulate the development of novel strategies and datasets that may eventually recover the true evolutionary history of life.

All retrotransposon data are presented in Supplementary Materials. The exon DNA and amino acid alignments and individual gene trees are deposited at https://figshare.com/s/b0bca1ca0f8328ec993a (accessed on 28 March 2022).

We acknowledge support from the Open Access Publication fund of the University of Münster. 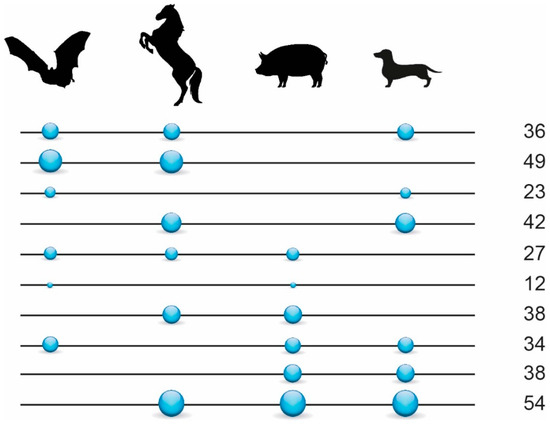 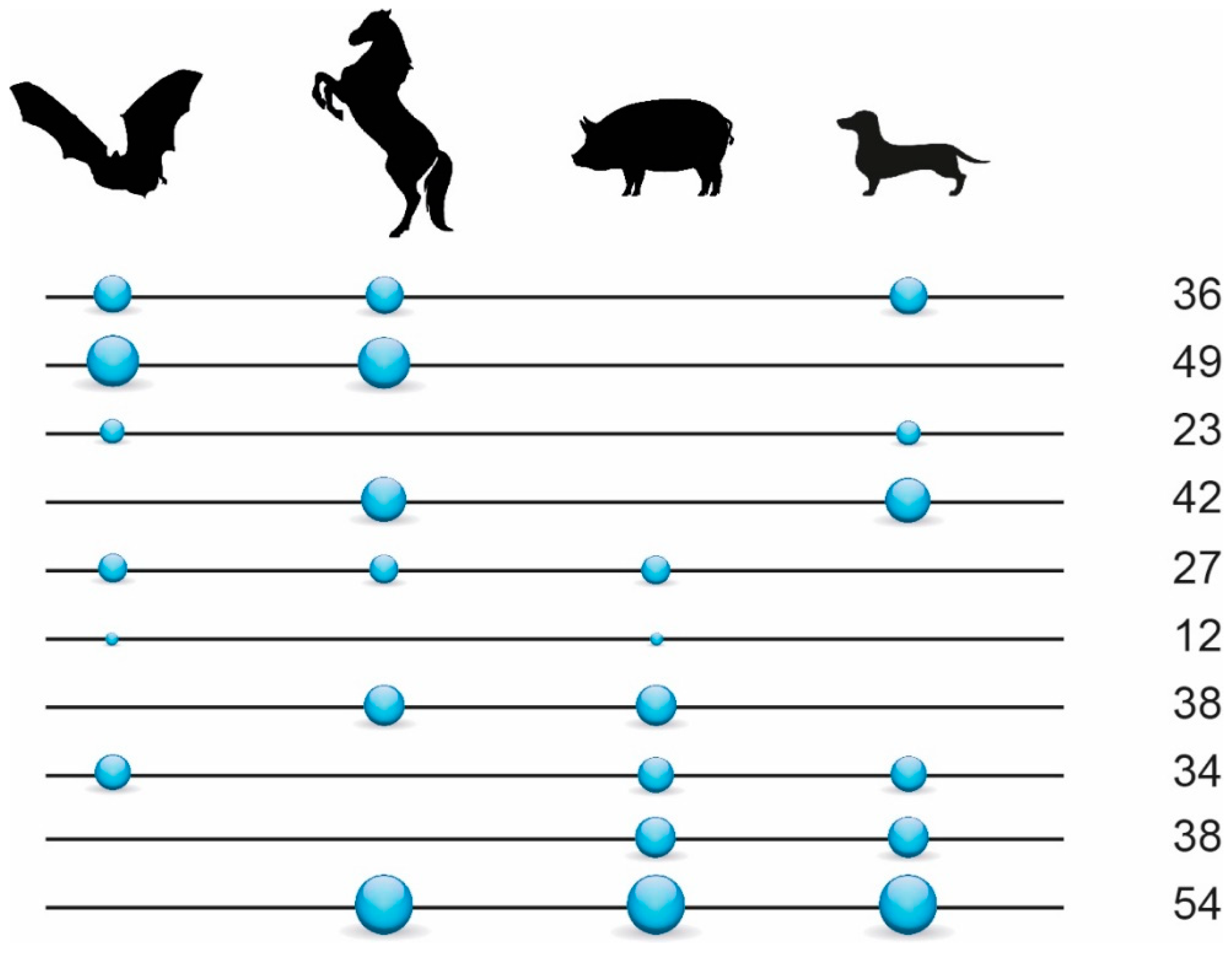