Genetically Targeted Clinical Trials in Parkinson’s Disease: Learning from the Successes Made in Oncology

Parkinson’s disease (PD) is a debilitating neurodegenerative disease that causes a great clinical burden. However, its exact molecular pathologies are not fully understood. Whilst there are a number of avenues for research into slowing, halting, or reversing PD, one central idea is to enhance the clearance of the proposed aetiological protein, oligomeric α-synuclein. Oligomeric α-synuclein is the main constituent protein in Lewy bodies and neurites and is considered neurotoxic. Multiple E3 ubiquitin-protein ligases, including the NEDD4 (neural precursor cell expressed developmentally downregulated protein 4) family, parkin, SIAH (mammalian homologues of Drosophila seven in absentia), CHIP (carboxy-terminus of Hsc70 interacting protein), and SCFFXBL5 SCF ubiquitin ligase assembled by the S-phase kinase-associated protein (SKP1), cullin-1 (Cul1), a zinc-binding RING finger protein, and the F-box domain/Leucine-rich repeat protein 5-containing protein FBXL5), have been shown to be able to ubiquitinate α-synuclein, influencing its subsequent degradation via the proteasome or lysosome. Here, we explore the link between NEDD4 ligases and PD, which is not only via α-synuclein but further strengthened by several additional substrates and interaction partners. Some members of the NEDD4 family of ligases are thought to crosstalk even with PD-related genes and proteins found to be mutated in familial forms of PD. Mutations in NEDD4 family genes have not been observed in PD patients, most likely because of their essential survival function during development. Following further in vivo studies, it has been thought that NEDD4 ligases may be viable therapeutic targets in PD. NEDD4 family members could clear toxic proteins, enhancing cell survival and slowing disease progression, or might diminish beneficial proteins, reducing cell survival and accelerating disease progression. Here, we review studies to date on the expression and function of NEDD4 ubiquitin ligases in the brain and their possible impact on PD pathology.
Keywords: NEDD4; E3 ubiquitin–protein ligase; α-synuclein; Parkinson’s disease; dopaminergic neurons NEDD4; E3 ubiquitin–protein ligase; α-synuclein; Parkinson’s disease; dopaminergic neurons

Parkinson’s disease (PD) is characterised by the loss of midbrain dopaminergic neurons in the substantia nigra, which is frequently accompanied by an accumulation of α-synuclein in β-sheet filaments in these neurons (so-called Lewy bodies) and neurites [1]. This aggregation process is thought to underlie the disease’s toxicity, with intermediate α-synuclein oligomers being the toxic agent [1]. The accumulation of misfolded α-synuclein in PD is considered to be due to increased expression [2,3] or reduced degradation via the ubiquitin proteasome, the lysosome, and the autophagy system [4,5].
α-synuclein is known to undergo mono- and polyubiquitination; the former modification is normally involved in regulating protein trafficking, and the latter is considered a prerequisite for degradation. However, for small proteins such as α-synuclein, monoubiquitination seems to be sufficient for proteasomal degradation [4,5,6,7] (Figure 1). For α-synuclein, it has been proposed that the non-ubiquitinated protein might be slowly degraded by autophagy, the monoubiquitinated protein might be degraded by the proteasome, and the polyubiquitinated protein may be degraded by the proteasome and lysosome [4,8]. α-synuclein can be ubiquitinated on nine different lysine residues, lysines 6, 10, 12, 21, 23, 32, 34, 43 and 96, with different preferences in monomeric, oligomeric, and aggregated α-synuclein, as N-terminal monoubiquitination stimulates aggregation and proteasomal degradation [4,5].
The attachment of ubiquitin to proteins (“ubiquitination”) is usually catalysed by an enzymatic cascade of a ubiquitin-activating enzyme E1 (only two in the human genome), a ubiquitin-binding/conjugating enzyme E2 (around 35 in the human genome), and a ubiquitin–protein ligase enzyme E3 (around 600 in the human genome) that catalyses the transfer of the C-terminal carboxyl group of ubiquitin to the lysine (K) ε-amino group of the specific substrate. E3 ligases have at least two domains: a region to interact with an E2 enzyme and a region to recognise the specific substrate proteins. Based on the E2 interaction domain, E3 enzymes can be grouped into two families, HECT (homologous to human papillomavirus oncogene E6-associated protein carboxy-terminus) domain E3s and the more frequent single- and multisubunit RING (really interesting new gene; two zinc ions in a cross-braced arrangement of eight cysteines and histidines) and RING-like (U-box found in the polyubiquitin chain elongation protein E4 saccharomyces cerevisiae Ufd2 protein with noncovalent interactions of core amino acids forming a RING-like tertiary structure without zinc and plant homeodomain/proline-hydroxylase-domain/leukaemia-associated protein (PHD/LAP) with zinc) domain E3s [10].
Several different E3 ubiquitin–protein ligases have been described to be able to ubiquitinate different forms of α-synuclein [5], but it remains a matter of debate which E3 ubiquitin–protein ligases might be crucial for α-synuclein degradation, how mutations and misfolding of α-synuclein reduce its recognition by E3 enzymes as a substrate, and whether the E3 enzyme activity itself might be altered in PD. Besides the possible redundancy of different E3 ligases, it seems a common theme that E3 ligases ubiquitinate several different substrates. Therefore, accumulated α-synuclein might block E3 ubiquitin ligase activity and lead to the accumulation of other substrates, which may subsequently contribute to the disease aetiology.
After summarising the different E3 ubiquitin–protein ligases, which have been suggested to use α-synuclein as a substrate, we focus on one group of them—the NEDD4 family, which has many additional PD-linked substrates—and support the idea that NEDD4 family members can be considered as therapeutic targets to treat PD.

The human NEDD4-1 gene is located on chromosome 15q21.3 and is comprised of 33 exons transcribed in three mRNAs of 6.4, 7.8, and 9.5 kbp in size. It encodes the NEDD4-1 protein, which has a molecular weight of around 120 kDa [203]. In mice, the NEDD4-1 gene is located on chromosome 9, and the protein has a similar molecular weight [204].
The NEDD4-2 (NEDD4L) gene is located on chromosome 18q12.31 in humans, with 40 exons, and might result in at least five different transcripts, which appear tissue dependent [205,206]. Variability in these transcripts exists in the N-termini, with varying WW domains and sgk1 phosphorylation sites [206,207]. NEDD4-2 has been detected to be marginally smaller than NEDD4-1, with NEDD4-2-specific antibodies detected in two bands on a Western blot. In most tissues, these bands lie at the ~110–115 kDa mark, with one varying in size depending on the tissue type it is expressed in [207,208]. In mice, the NEDD4-2 gene is also localised on chromosome 18. The human NEDD4-2 gene is around 78% homologue to the human NEDD4-1 gene, and the proteins NEDD4-1 and NEDD4-2 share 63% sequence identity. NEDD4-1 gene homologues can be found in all eukaryotic organisms, although NEDD4-2 is found only in vertebrates. It is therefore thought that NEDD4-2 arose much later in evolution by gene duplication [42,209].
The two NEDD4-1 and NEDD4-2 cDNAs are highly expressed in the developing embryonic and postnatal mouse brain and are subsequently downregulated in the adult brain [210].
NEDD4-1 is also ubiquitously expressed in humans, in the endocrine tissue, lung, proximal digestive tract, gastrointestinal tract, liver, gallbladder, pancreas, kidney, urinary bladder, gonads, muscle, skin, bone marrow, and lymphoid tissue [211]. NEDD4-1 protein was detected in the dopaminergic system in neuromelanin-positive neurons and in reactive glia cells in the substantia nigra and locus coeruleus of Parkinson’s disease and in Lewy body dementia patient brains containing Lewy bodies. It was also detected in lower amounts in neuromelanin-positive neurons in human control brains [28,85]. NEDD4-1 mRNA was shown to be increased in brain regions with Lewy body pathology [212]. This suggests an important role for NEDD4-1 in disease. It may be a possibility that NEDD4-1 accumulation in Lewy body-containing neurons occurs as a result of neuronal damage. However, a more likely explanation is that NEDD4-1 regulation is representative of a neuroprotective response that leads to a reduction in α-synuclein accumulation. NEDD4-1 mRNA and protein were also detected in the brain stem of mice [197], but so far, no detailed cellular expression study of NEDD4-1 has been conducted in the dopaminergic system of mice. In other parts of the central nervous system NEDD4-1 has been described to be expressed in oligodendrocytes [110]. In cultured cells, NEDD4-1 is predominantly expressed in the cytosol, near the nucleus, and can be found in neurites after neuronal differentiation. It can, however, be recruited with E2 enzymes to the nucleus [203]. NEDD4-1 has also been shown to be active at the cell membrane and exosomes [213]. NEDD4-2 is broadly expressed in humans, in the endocrine tissue, heart, lung, gastrointestinal tract, liver, gallbladder, pancreas, kidney, urinary bladder, gonads, muscle, bone marrow, and lymphoid tissue [211,214]. In the dopaminergic system, NEDD4-2 protein expression was confirmed in the substantia nigra of mice [114] but not in human brain sections. The NEDD4-2 protein was found mainly in the cytosol of substantia nigra neurons and astrocytes [114].
The precise cell type-specific expression of NEDD4-1 and NEDD4-2 in the midbrain dopaminergic system requires further analysis. However, their expression in midbrain dopaminergic neurons not only during development but during adulthood and ageing, as well as in PD brain samples, supports the idea of an important role here for protein homeostasis.

The collected data support the notion that further research is required to clarify the unique and common features of NEDD4-1 and NEDD4-2 especially in the midbrain dopaminergic system affected in PD. The large number of possible mechanisms for regulating NEDD4 ubiquitination activity, substrate specificity, and protein interactions make an in silico prediction of possible outcomes extremely difficult. The regulation, function, and substrate specificity of NEDD4-1 and NEDD4-2 need to be studied in vivo in a tissue- and cell-type-specific fashion before strategies can be designed to propose them as therapeutic targets for neurodegenerative diseases such as PD. The possible substrates suggest that NEDD4-1 and/or NEDD4-2 could be beneficial or harmful in the disease context. Currently, it is not clear if NEDD4-1 and/or NEDD4-2 protein levels should be increased or decreased to improve the conditions in dopaminergic neurons under pathophysiological conditions such as PD. Research on NEDD4 proteins in neurodegenerative diseases remains an exciting field in which many surprising findings can still be expected. Unbiased approaches should therefore be applied to remain open to all possible outcomes. In the recent years, the toolkit for studying NEDD4-1 and NEDD4-2 has dramatically improved, with the availability of conditional animal models for NEDD4-1 and NEDD4-2, good antibodies, and specific knockdown possibilities, which will facilitate further investigations. 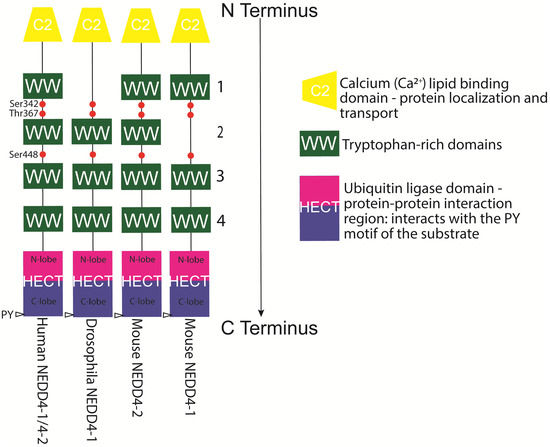 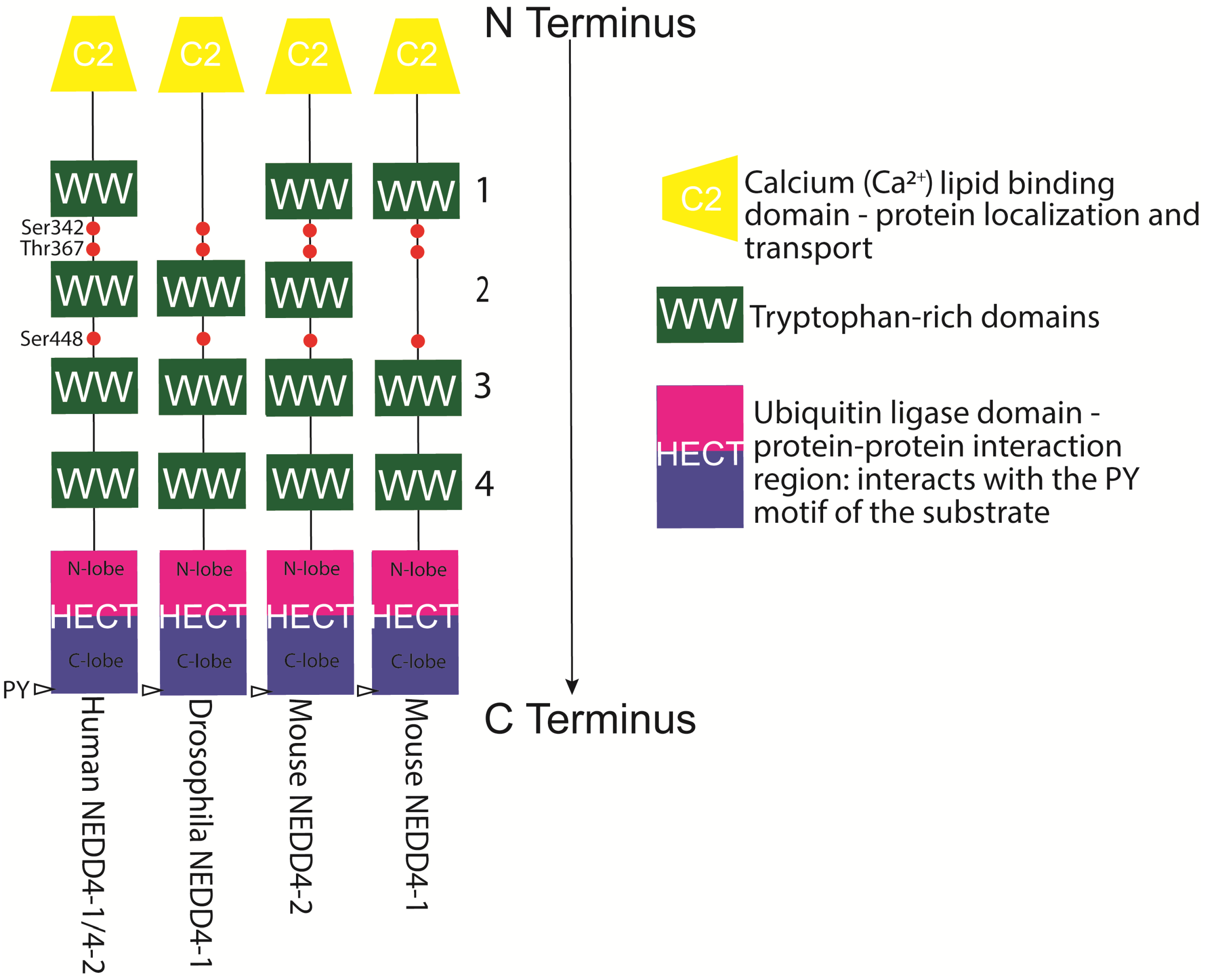