:
Background: Parkinson’s disease (PD) is a neurodegenerative disorder, and literature suggests that genetics and lifestyle/environmental factors may play a key role in the triggering of the disease. This study aimed to evaluate the predictive performance of a 12-Single Nucleotide Polymorphisms (SNPs) polygenic risk score (PRS) in combination with already established PD-environmental/lifestyle factors. Methods: Genotypic and lifestyle/environmental data on 235 PD-patients and 464 controls were obtained from a previous study carried out in the Cypriot population. A PRS was calculated for each individual. Univariate logistic-regression analysis was used to assess the association of PRS and each risk factor with PD-status. Stepwise-regression analysis was used to select the best predictive model for PD combining genetic and lifestyle/environmental factors. Results: The 12-SNPs PRS was significantly increased in PD-cases compared to controls. Furthermore, univariate analyses showed that age, head injury, family history, depression, and Body Mass Index (BMI) were significantly associated with PD-status. Stepwise-regression suggested that a model which includes PRS and seven other independent lifestyle/environmental factors is the most predictive of PD in our population. Conclusions: These results suggest an association between both genetic and environmental factors and PD, and highlight the potential for the use of PRS in combination with the classical risk factors for risk prediction of PD.
Keywords:
Parkinson’s disease; polygenic risk score; PRS; predictive model; genetic variants; SNPs; environmental factors; case-control study; Cypriot population 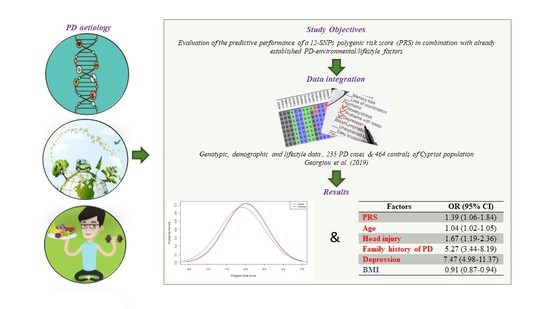 Parkinson’s disease (PD) is a progressive neurodegenerative movement disorder and the second most common after Alzheimer’s disease, worldwide [1]. Selective loss or death of dopamine secreting neurons of the substantia nigra, and Lewy bodies accumulation in the spinal cord and brain are key pathological feature of the disease [2]. PD is characterised by motor symptoms such as rigidity, bradykinesia, and resting tremor as well as non-motor symptoms [2]. The prevalence of PD varies by age as it affects ~0.3% of the general population, ~1% of the population over of 60 years, and 3.5% of the population over 85 years [1,3]. Up to date, the etiology of PD is still unclear [2]. However, PD is considered as a multifactorial disorder and previous epidemiological studies suggest that both genetic and environmental factors play an essential role in the triggering of the disease [2,3,4].
Over the years, more than 90 genetic variants that are associated with sporadic PD, progression and age at onset have been identified through multiple Genome Wide Association Studies (GWAS) [5]. Despite the large number of the genetic studies and the reported variants in PD, some of the variants have a small effect on disease risk and an important proportion of the overall genetic contribution to PD risk is not clearly understood [1]. In addition, previous studies reported that environmental, including lifestyle, factors may also play a role in the development of the disease. Environmental factors, such as diet (e.g., dairy products, soft drinks, and red meat consumption), depression, exposure to pesticides, rural living and head injury were positively associated with PD, whereas smoking, alcohol, coffee consumption, and physical activity were inversely associated with the disease [3,6,7,8].
Although the already published genetic and epidemiological studies explain a substantial part of genetic as well as phenotypic variability and etiology of PD, a large fraction of genetic and environmental contribution remains to be studied [1]. Genetic and environmental factors may interact with each other in a complex manner, increasing the risk for the development of PD [2,3,4]. Several studies indicated that polygenic risk scores (PRS), which combine the effect of multiple genetic variants, can capture the overall genetic background of complex traits and diseases, including PD [1,4,9,10]. Furthermore, a combination of the genetic background with environmental findings may provide a better understanding of the disease. Although, a small GWAS was previously performed in the Greek population and some of the investigated SNPs (rs6599389 and rs356220) had the same OR direction with the results of our study in the Greek-Cypriot population, PRS was not calculated [11]. Therefore, the aim of this pilot study was to evaluate the predictive performance of a PRS consisting of 12-SNPs, which have been previously associated with PD in GWAS, and to test the combined effect of the PRS and already established risk factors on PD risk. This is a proof-of-concept study that aims to explore our population. Despite that the sample size of our study in this population is relatively small; this study provides important results and will initiate the investigation of combined environmental and genetic factors of PD in the Greek-Cypriot population. Future studies with increased sample size and number of SNPs could redefine future models and will have the potential to be evaluated for their clinical utility.

This investigation used genotypic and demographic/lifestyle data obtained from a previous case-control study carried out in the Greek-Cypriot population (235 unrelated PD patients and 464 age and sex matched unrelated healthy controls) [3]. All patients were recruited in the study after clinical diagnosis of PD. Demographic/lifestyle data from PD cases and controls were collected through a personal interview. The study was approved by the Cyprus National Bioethics Committee (ΕΕΒΚ/ΕΠ/2014/29) and all subjects gave written informed consent in accordance with the 1964 Declaration of Helsinki. Genotypic data of 12 (rs12185268, rs10513789, rs6599389, rs356220, rs7617877, rs17115100, rs13312, rs1801582, rs4837628, rs823118, rs356182, rs17649553) out of 13 SNPs that were genotyped by Georgiou et al. [3] were used for the current study. These SNPs were reported to be associated with PD in previous GWAS or interaction studies [12,13,14,15,16]. One SNP was excluded from our study due to discrepancy between the genotypes. Detailed information on the study’s methodology and original SNP selection can be found in the original publication [3]. Based on the previous study, the selected SNPs have been associated with PD (p ≤ 5 × 10−8) in at least one out of the five large GWAS meta-analysis studies for PD in the European population and had 0.81 > OR > 1.23 and MAF > 5%.

A weighted PRS based on 12 SNPs previously related with PD [3] (Table 1) was calculated for each individual. The PRS was calculated following the approach previously described in Mavaddat et al. [17] and using the formula PRS = β1x1 + β2x2 +...+ βkxk +…+ βnxn; where β is the log(OR) of each SNP from previous published studies and x is the ith SNP dosage (0,1,2) of each individual in our dataset.

A series of packages which work under R software (version 3.6.3) were used. Univariate logistic regression analysis was applied in order to assess the association of each previously established PD risk factor and PD status. Area Under Curve (AUC) was also calculated in order to measure the ability of a risk factor to distinguish between PD patients and controls. In addition, logistic regression analysis was also applied in order to assess the relationship between the PRS and PD status. A p-value of < 0.05 was considered as statistically significant. Odds ratio (OR) and 95% confidence intervals (CI) were calculated.
Continuous variables, PRS and BMI were stratified into quartiles and ORs of each quartile were assessed using logistic regression with the 25–50% (second quartile) and 20–24.94 (normal weight) ranges as references, respectively. PRS was standarised based on the control values.
Stepwise-regression analysis was used to select the best performing variables in the predictive models, using all the variables from the univariate logistic regression analyses. Stepwise regression was performed using the statistical software R following three approaches; forward selection, backward elimination, and bidirectional elimination. AUC and goodness-of-fit (GOF) were calculated for all the different models. PRS was adjusted by all covariates and possible cofounders.
Cases and controls were stratified into deciles based on the significant variables/risk factors, obtained from the predicted probabilities of the multivariate model. The ORs of extreme deciles were evaluated using logistic regression with a reference range of 40–50%. Plots were designed using ggplot2 function in R.

In conclusion, these results suggest an association between five environmental/lifestyle factors as well as a 12-SNPs PRS and risk of PD. In addition, the model, which combines eight independent factors, could be useful for the calculation of a risk score predictive of PD in the Greek-Cypriot population.
Therefore, this may facilitate a better understanding of gene-gene as well as gene-environment interactions in the development of PD. Further investigation with a larger cohort and a PRS with additional variants may increase the statistical power and confirm that the combination of these factors could potentially be used for predictive testing.

The study was conducted according to the guidelines of the Declaration of Helsinki and approved by Cyprus National Bioethics Committee (ΕΕΒΚ/ΕΠ/2014/29). 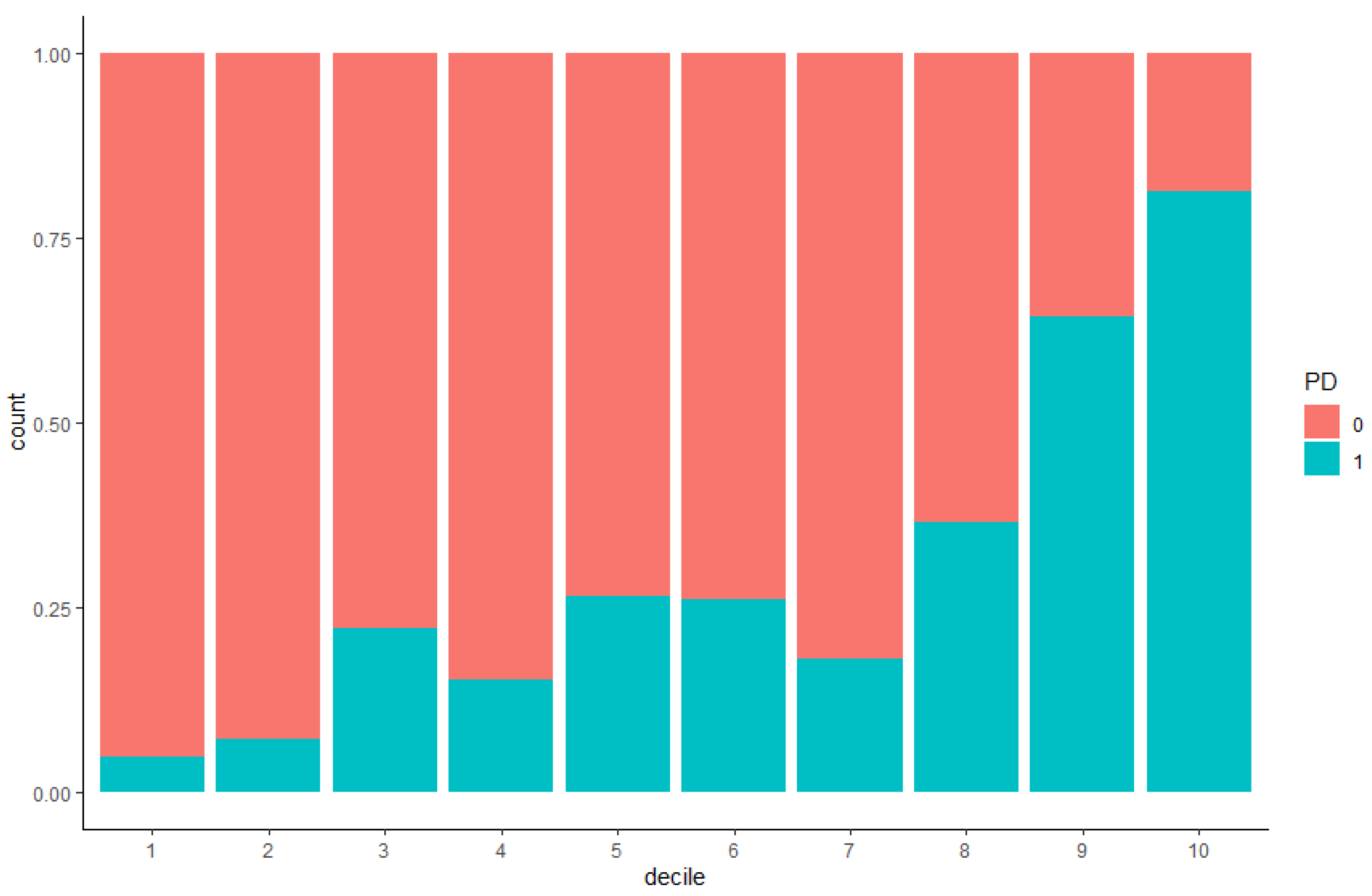 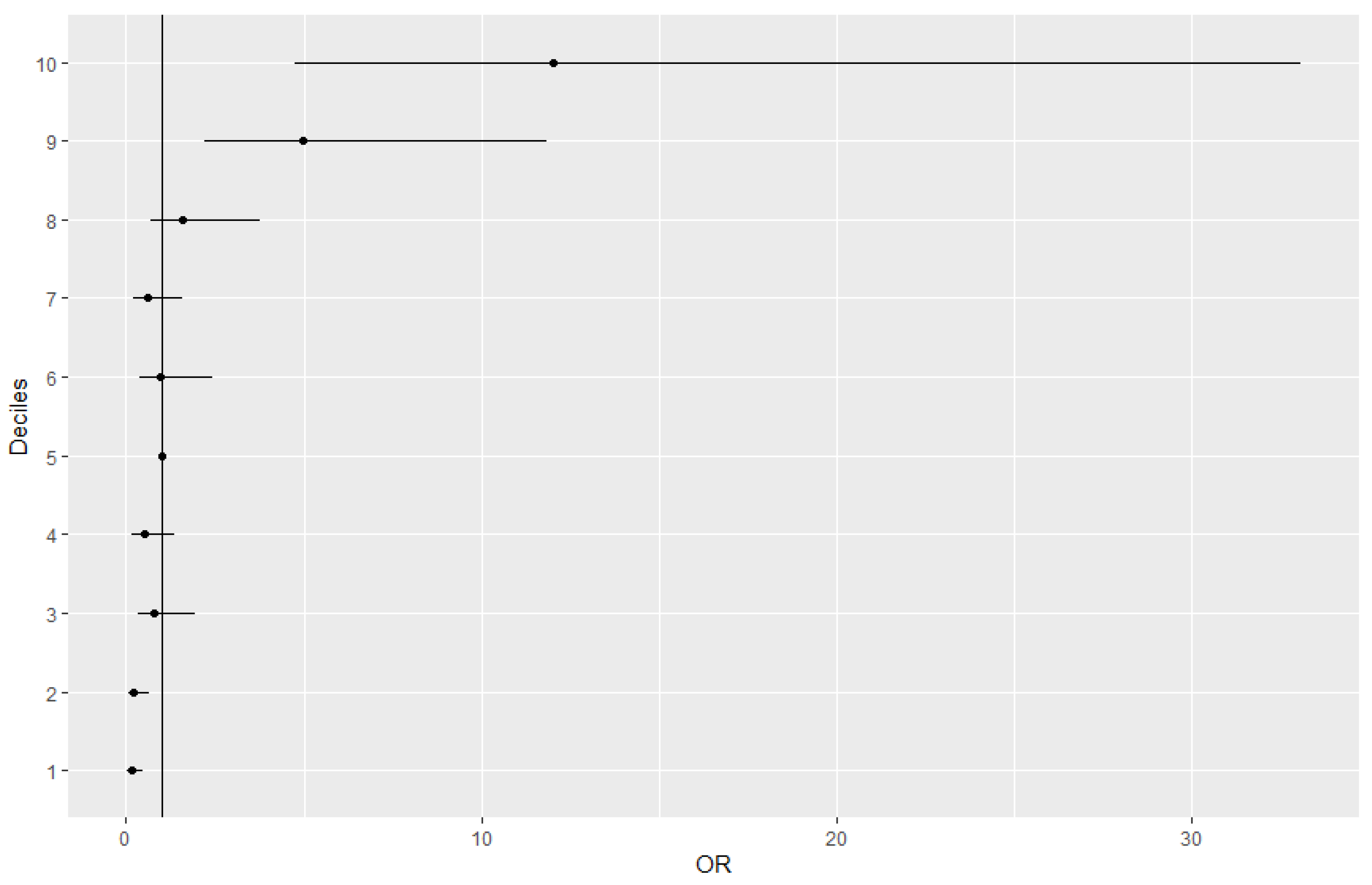