On the Unfounded Enthusiasm for Soft Selective Sweeps III: The Supervised Machine Learning Algorithm That Isn’t

In the last 15 years or so, soft selective sweep mechanisms have been catapulted from a curiosity of little evolutionary importance to a ubiquitous mechanism claimed to explain most adaptive evolution and, in some cases, most evolution. This transformation was aided by a series of articles by Daniel Schrider and Andrew Kern. Within this series, a paper entitled “Soft sweeps are the dominant mode of adaptation in the human genome” (Schrider and Kern, Mol. Biol. Evolut. 2017, 34(8), 1863–1877) attracted a great deal of attention, in particular in conjunction with another paper (Kern and Hahn, Mol. Biol. Evolut. 2018, 35(6), 1366–1371), for purporting to discredit the Neutral Theory of Molecular Evolution (Kimura 1968). Here, we address an alleged novelty in Schrider and Kern’s paper, i.e., the claim that their study involved an artificial intelligence technique called supervised machine learning (SML). SML is predicated upon the existence of a training dataset in which the correspondence between the input and output is known empirically to be true. Curiously, Schrider and Kern did not possess a training dataset of genomic segments known a priori to have evolved either neutrally or through soft or hard selective sweeps. Thus, their claim of using SML is thoroughly and utterly misleading. In the absence of legitimate training datasets, Schrider and Kern used: (1) simulations that employ many manipulatable variables and (2) a system of data cherry-picking rivaling the worst excesses in the literature. These two factors, in addition to the lack of negative controls and the irreproducibility of their results due to incomplete methodological detail, lead us to conclude that all evolutionary inferences derived from so-called SML algorithms (e.g., S/HIC) should be taken with a huge shovel of salt. View Full-Text
Keywords: artificial intelligence (AI); supervised machine learning (SML); evolutionary biology; molecular and genome evolution; selective sweeps; population size artificial intelligence (AI); supervised machine learning (SML); evolutionary biology; molecular and genome evolution; selective sweeps; population size
►▼ Show Figures 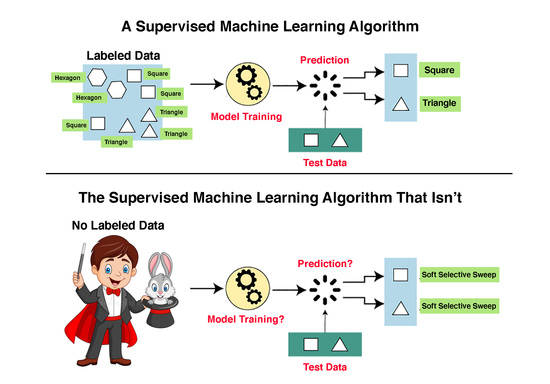 Eran Elhaik
Eran Elhaik (born 1980 in Israel) is a geneticist and bioinformatician, and an Associate Professor of bioinformatics at Lund University in Sweden. His research uses computational, statistical, epidemiological and mathematical approaches to fields such as complex disorders, population genetics, personalized medicine, molecular evolution, genomics, paleogenomics and epigenetics. His most recent approach applied machine learning to address questions of human migration and origins using AI-based approaches.
Zoom | Orient | As Lines | As Sticks | As Cartoon | As Surface | Previous Scene | Next Scene
We use cookies on our website to ensure you get the best experience. Read more about our cookies here.
Accept
We have just recently launched a new version of our website. Help us to further improve by taking part in this short 5 minute survey here. here.
Never show this again