Cloning, Characterization, and RNA Interference Effect of the UDP-N-Acetylglucosamine Pyrophosphorylase Gene in Cnaphalocrocis medinalis
Next Article in Special Issue

Background: Several genes and single nucleotide polymorphisms (SNPs) have been associated with early childhood caries. However, they are highly age- and population-dependent and the majority of existing caries prediction models are based on environmental and behavioral factors only and are scarce in infants. Methods: We examined 6 novel and previously analyzed 22 SNPs in the cohort of 95 Polish children (48 caries, 47 caries-free) aged 2–3 years. All polymorphisms were genotyped from DNA extracted from oral epithelium samples. We used Fisher’s exact test, receiver operator characteristic (ROC) curve and uni-/multi-variable logistic regression to test the association of SNPs with the disease, followed by the neural network (NN) analysis. Results: The logistic regression (LogReg) model showed 90% sensitivity and 96% specificity, overall accuracy of 93% (p < 0.0001), and the area under the curve (AUC) was 0.970 (95% CI: 0.912–0.994; p < 0.0001). We found 90.9–98.4% and 73.6–87.2% prediction accuracy in the test and validation predictions, respectively. The strongest predictors were: AMELX_rs17878486 and TUFT1_rs2337360 (in both LogReg and NN), MMP16_rs1042937 (in NN) and ENAM_rs12640848 (in LogReg). Conclusions: Neural network prediction model might be a substantial tool for screening/early preventive treatment of patients at high risk of caries development in the early childhood. The knowledge of potential risk status could allow early targeted training in oral hygiene and modifications of eating habits. View Full-Text
Keywords: early childhood caries; single nucleotide polymorphisms; artificial neural network; early prediction model; complex trait early childhood caries; single nucleotide polymorphisms; artificial neural network; early prediction model; complex trait
►▼ Show Figures 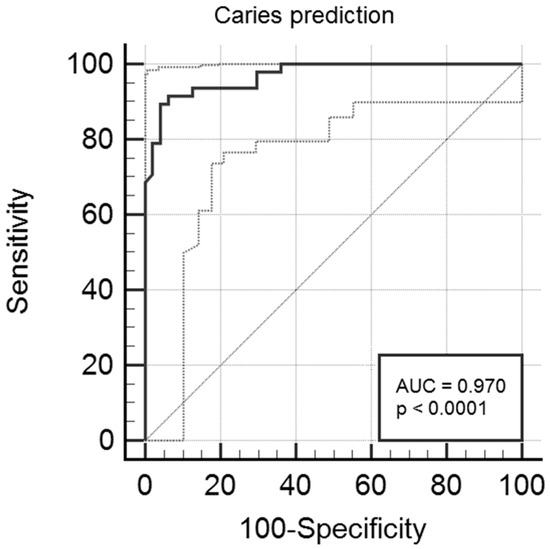