Ongoing climatic changes, with predictable impacts on marine environmental conditions, are expected to trigger organismal responses. Recent evidence shows that, in some marine species, variation in mitochondrial genes involved in the aerobic conversion of oxygen into ATP at the cellular level correlate with gradients of sea surface temperature and gradients of dissolved oxygen. Here, we investigated the adaptive potential of the European sardine Sardina pilchardus populations offshore the Iberian Peninsula. We performed a seascape genetics approach that consisted of the high throughput sequencing of mitochondria’s ATP6, COI, CYTB and ND5 and five microsatellite loci on 96 individuals coupled with environmental information on sea surface temperature and dissolved oxygen across five sampling locations. Results show that, despite sardines forming a nearly panmictic population around Iberian Peninsula, haplotype frequency distribution can be explained by gradients of minimum sea surface temperature and dissolved oxygen. We further identified that the frequencies of the most common CYTB and ATP6 haplotypes negatively correlate with minimum sea surface temperature across the sampled area, suggestive of a signature of selection. With signatures of selection superimposed on highly connected populations, sardines may be able to follow environmental optima and shift their distribution northwards as a response to the increasing sea surface temperatures. View Full-Text
Keywords: small pelagic fishes; OXPHOS complex; adaptive potential; climate change small pelagic fishes; OXPHOS complex; adaptive potential; climate change
►▼ Show Figures 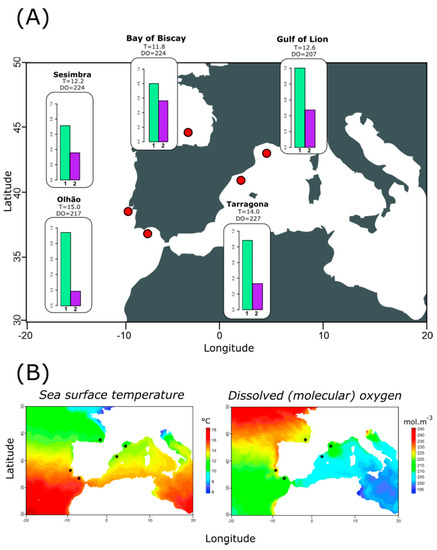 Miguel Baltazar-Soares
Miguel Baltazar-Soares is an evolutionary biologist specialized in population genetics and genomics, with a deep interest in the application of evolutionary theory to management and conservation. MBS research focus on natural populations of non-model organisms, where he investigate patterns related to connectivity, demography and adaptive potential of endangered species or in the context of biological invasions.

André Ricardo de Araújo Lima
André Ricardo Araújo Lima is a Researcher at the Marine Environmental Sciences Centre (MARE-ISPA), Portugal, since December 2019. He graduated in Biology in 2008 and holds a PhD in Oceanography since 2015, both by the Federal University of Pernambuco, Brazil. For over 11 years, he has been studying ecological niche shifts throughout the ontogeny of Western Atlantic fishes over spatial and seasonal scales. His expertise focuses on the use of sampling designs, multivariate tests and ecological modelling to study how anthropogenic impacts and climate variability affect the distribution, trophodynamics and contamination of coastal fish assemblages along environmental gradients. His research is now focused on the impacts of climate change on Small Pelagic Fishes through the use of Ecological Niche Modelling. To better conduct this work, he became a member of the Working Group on Small Pelagic Fishes, part of the International Council for the Exploration of the Sea.

Gonçalo Silva
Gonçalo Silva is a postdoctoral researcher at ISPA - Instituto Universitário/ MARE - Marine and Environmental Sciences Centre, Portugal, and is the Principal Investigator of SardiTemp project. His research is focused on the ecology and evolution of marine fishes, particularly in the response of small pelagic fish to climate change and on the understanding of patterns and processes that occur in wild populations
Zoom | Orient | As Lines | As Sticks | As Cartoon | As Surface | Previous Scene | Next Scene
We use cookies on our website to ensure you get the best experience. Read more about our cookies here.
Accept
We have just recently launched a new version of our website. Help us to further improve by taking part in this short 5 minute survey here. here.
Never show this again