We identified the known c.1_9del mutation in the PLEC gene in four unrelated females from consanguineous families of Turkish origin. All individuals presented with slowly progressive limb-girdle weakness without any dermatological findings, and dystrophic changes observed in their muscle biopsies. Additionally, the neurological examination revealed ptosis, facial weakness, fatigability, and muscle cramps in all four cases. In two patients, repetitive nerve stimulation showed a borderline decrement and a high jitter was detected in all patients by single-fiber electromyography. Clinical improvement was observed after treatment with pyridostigmine and salbutamol was started. We further characterize the phenotype of patients with limb-girdle muscular dystrophy R17 clinically, by muscle magnetic resonance imaging (MRI) features and by describing a common 3.8 Mb haplotype in three individuals from the same geographical region. In addition, we review the neuromuscular symptoms associated with PLEC mutations and the role of plectin in the neuromuscular junction.
Keywords: plectin; PLEC; myasthenia; limb-girdle muscular dystrophy plectin; PLEC; myasthenia; limb-girdle muscular dystrophy

The PLEC gene consists of 32 exons and is ubiquitously expressed, including in skeletal muscle, skin and heart [1]. Plectin is a large protein ranging from 4684 amino acids in the canonical form to 3447 amino acids in the smallest stable isoform. It has a unique molecular structure: the N-terminal domain is encoded by multiple short exons, whereas the central-rod domain and the C-terminal domain are encoded by single large exons. Exons 2-32 are constant, but eight different-sized forms of exon 1 exist, which undergo alternative splicing into exon 2. At least eight different plectin isoforms (1, 1a, 1b, 1c, 1d, 1e, 1f, and 1g) resulting from the different splicing of exon 1 have been identified [2]. These isoforms have various lengths, localizations, interacting partners, and specific functions. For instance, plectin 1a is localized to the outer nuclear/endoplasmic reticulum membrane system, plectin 1b to the mitochondria and plectin 1d at the Z-disks [3]. Plectin 1f, in particular in striated muscle, has been shown to interact with components of the dystrophin-glycoprotein complex [4] but also to play an important role in the neuromuscular junction (NMJ) where it interacts directly with rapsyn [5]. Plectin stabilizes the desmin cytoskeleton and interacts with its three main components: actin microfilaments, microtubules, and intermediate filaments. Other tissue specific roles depend on the specific splicing isoform and the numerous binding partners, such as α-actinin, vimentin, keratin, and desmin, which interact with different regions of the plectin protein [3,6].
Mutations in PLEC are associated with multiple phenotypes depending on the location of the mutation and isoform affected. Epidermolysis bullosa simplex with muscular dystrophy [EBS-MD (MIM #226670)] is caused by recessive mutations [7,8], mostly nonsense, out-of-frame insertions or deletions within exon 31 and 32, leading to premature protein termination. Individuals with EBS-MD show severe skin blistering, sometimes accompanied by skin atrophy, alopecia, and nail dystrophy, with first symptoms usually starting in infancy and even leading to premature death in childhood. The EBS-MD phenotype shows high clinical variability with a few individuals also presenting with myasthenic symptoms and additional features, such as anemia and cardiomyopathy [9]. Additionally, a phenotype of recessive limb-girdle muscular dystrophy, LGMD R17 plectin-related (MIM #613723, previously known as LGMD 2Q), was reported [10]. LGMD R17 is associated so far with only recessive truncating mutations located in exon 1f, and manifests with muscle weakness without any skin involvement. This phenotype was first described in three consanguineous Turkish families carrying a c.1_9del mutation and presenting with young adult/childhood onset muscle weakness and dystrophic changes in the muscle biopsy, without skin involvement or myasthenic features [10].
The association of plectin deficiency with muscle weakness is already well characterized. However, the role of plectin deficiency in patients with features of a congenital myasthenic syndrome is still not well understood and is only based on a few case reports. Herein, we describe four individuals with LGMD, easy fatigability, ptosis, and clinical responsiveness to acetylcholinesterase inhibitors and salbutamol, features commonly associated with myasthenic syndromes. They all carry the known c.1_9del PLEC mutation in homozygosity. All four patients included in this study originate from the same region near the Black Sea, in Turkey. We also identified a shared haplotype in three individuals suggesting a common origin of the mutation. Patients with myasthenic symptoms of unknown origin should be tested for mutations in the PLEC gene.

Photographs and blood samples from patients and family members were obtained upon written informed consent according to the Declaration of Helsinki. The study protocol was approved by the Istanbul University Institutional Review Board for Research with Human Participants. DNA samples were submitted to the Newcastle Medical Research Council (MRC) Center Biobank for Neuromuscular Diseases for which ethical approval was granted by the NRES (National Research Ethics Service) Committee North-East—Newcastle & North Tyneside 1 (reference 08/H0906/28). Informed written consent was given by the patients. Phenotype data collection was performed using the PhenoTips online software tool (https://phenotips.com).

All families characterized in this study were consanguineous and showed a recessive inheritance pattern. Three individuals (family A, B and C) were included in the MYO–SEQ project [11]. For these patients, whole exome sequencing (WES) was performed at the Broad Institute’s Genomics Platform, using Illumina exome capture on a cohort of >1800 patients with limb-girdle muscle weakness. Exome data was analyzed using standard filtering criteria (i.e., VEP moderate to high and MAF <1% and a gene list of 429 genes associated with muscle disease). The patient from family D was diagnosed by exome sequencing analysis performed at the Intergen Genetic Laboratory in Ankara, Turkey and the PLEC mutation was confirmed by Sanger sequencing. The size of the haplotype for three patients (A, B and C) was estimated using unfiltered WES data. Annotation is based on gene accession number NM_201378, ENST00000356346 and NP_958780.1.

All four female patients were born to consanguineous parents (Figure 1), but with no family history of a neuromuscular disorder. All presented with slowly progressive proximal muscle weakness, easy fatigability, and muscle cramps. Two of them (C and D) had delayed motor milestones; three were slower than their peers during childhood, only patient B presented at 26 years old. Their neurological examination revealed fatigable ptosis (Figure 2), nasal speech, tongue weakness, neck flexor weakness, proximal weakness and paraspinal muscle weakness (Table 1). A high arched palate, mild scoliosis, and bilateral pseudohypertrophy in the gastrocnemius muscle were noted in all. Two patients (A and C) were wheelchair-bound at age 35 and 39 years. Serum creatine kinase (CK) levels were elevated (Table 1) and electromyography (EMG) showed myopathic changes. Patients A and B were negative for anti-AChR and anti-MUSK antibodies. In retrospective, the myasthenic symptoms, such as mild ptosis, were present since childhood, in patients A, C, D, and since her early twenties in patient B. All patients showed easy fatigability since childhood.
All patients had high jitter in single-fiber EMG. Two patients who had milder weakness had over 10% decremental response in repetitive nerve stimulation (RNS). Muscle biopsy analysis showed dystrophic changes in three patients and myopathic changes in one, with increased number of internal nuclei (over 10%) and a few angular atrophic fibers in all (Figure 3A,B). Muscle MRI showed relative sparing of the rectus femoris, gracilis and sartorius muscles in three patients (Figure 3C–G). Cardiac examinations including echocardiogram (ECHO) and 24 h Holter monitoring were normal. Treatment with pyridostigmine 180 mg/day and salbutamol 8 mg/day showed benefit in all patients. Salbutamol was well tolerated with no noted side effects. After six months of therapy, patient A was functionally better and noticed that she could use her arms for much longer without fatigue. Her baseline and 6-month scores according to the MRC scale were similar. Baseline respiratory function tests of patient B revealed a vital capacity (VC) of 53% and an forced vital capacity (FVC) of 54%. After 6 months of salbutamol treatment, her FVC increased to 66%. She also performed better in the 6MWT, with an increase from 274 m to 326 m. She only needed unilateral support for walking. Patient C’s baseline and 3-month MRC scores were similar, but her FVC in sitting increased from 57% to 62%. She was able to use her arms and hands more effectively and felt less tired after six months of salbutamol treatment. Salbutamol was well tolerated except for mild tremor in the hands. Patient D started treatment only recently and already reported that she felt less fatigued and was able to climb stairs more easily. Her 6MWT rose from 150 m before treatment to 180 m after treatment, while her VC increased respectively from 59% to 74%.

Whole exome sequencing identified a homozygous PLEC variant (hg19: chr8:145047630_1450476308delGCCGGCCAT; c.1_9delATGGCCGGC; p.[Met1_Gly3del]) in four unrelated patients; its segregation with the disease was ascertained by Sanger sequencing and revealed a heterozygous variant in a healthy sister and the unaffected parents. This variant is absent in the control population (https://gnomad.broadinstitute.org/region/8-145047531-145047731) and has already been associated with LGMD R17 in three consanguineous families of Turkish origin [10]. No other likely candidate gene was identified in the targeted analysis of the exomes; in particular no disease-causing variant in any of the known congenital myasthenic syndrome (CMS) genes (RAPSN, CHRNE, AGRN, ALG2, CHAT, CHRNA1, CHRNB1, CHRND, CHRNE, COLQ, DOK7, GFPT1, GMPPB, MUSK, PREPL and SLC5A7) was found.
In addition, based on the WES data for three of the patients (A, B and C), a shared 0.485 Mb (hg38:chr8:143930378-144415811) homozygous haplotype defined by 95 single nucleotide and small in/del variants, and surrounding the PLEC mutation was identified, suggesting a founder event for this variant. A larger shared haplotype of 3.4 Mb (hg38:chr8:140457861-143608716) defined by an additional ~350 variants can be seen for only two of the patients (A and B), indicating that a recombination event took place in patient C (Figure 4). The 0.485 Mb and the larger 3.4 Mb regions encompass 17 and 45 genes, respectively. According to the medical history, the families were not related (previous 4–5 generations were analyzed); however, their ancestors all came from Giresun, a city by the Black Sea in Turkey. 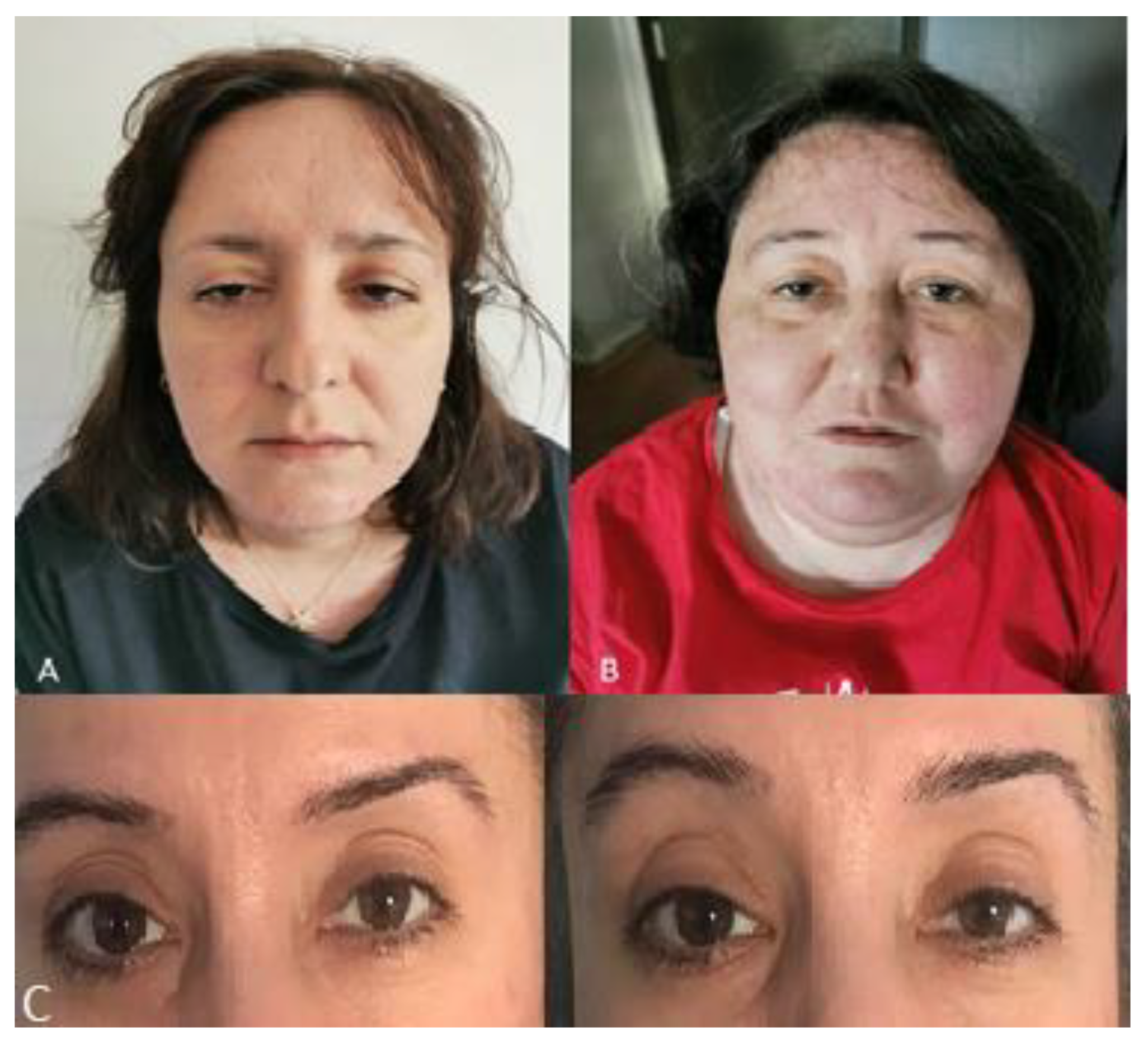 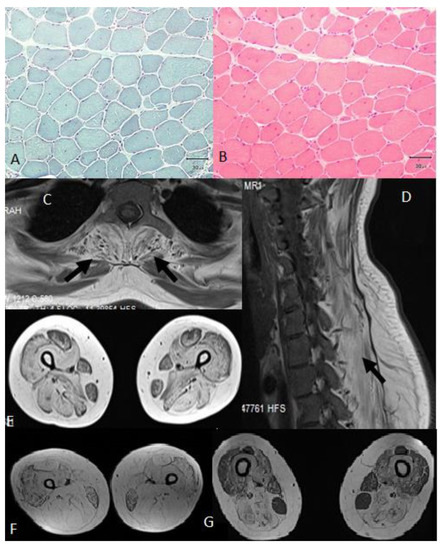 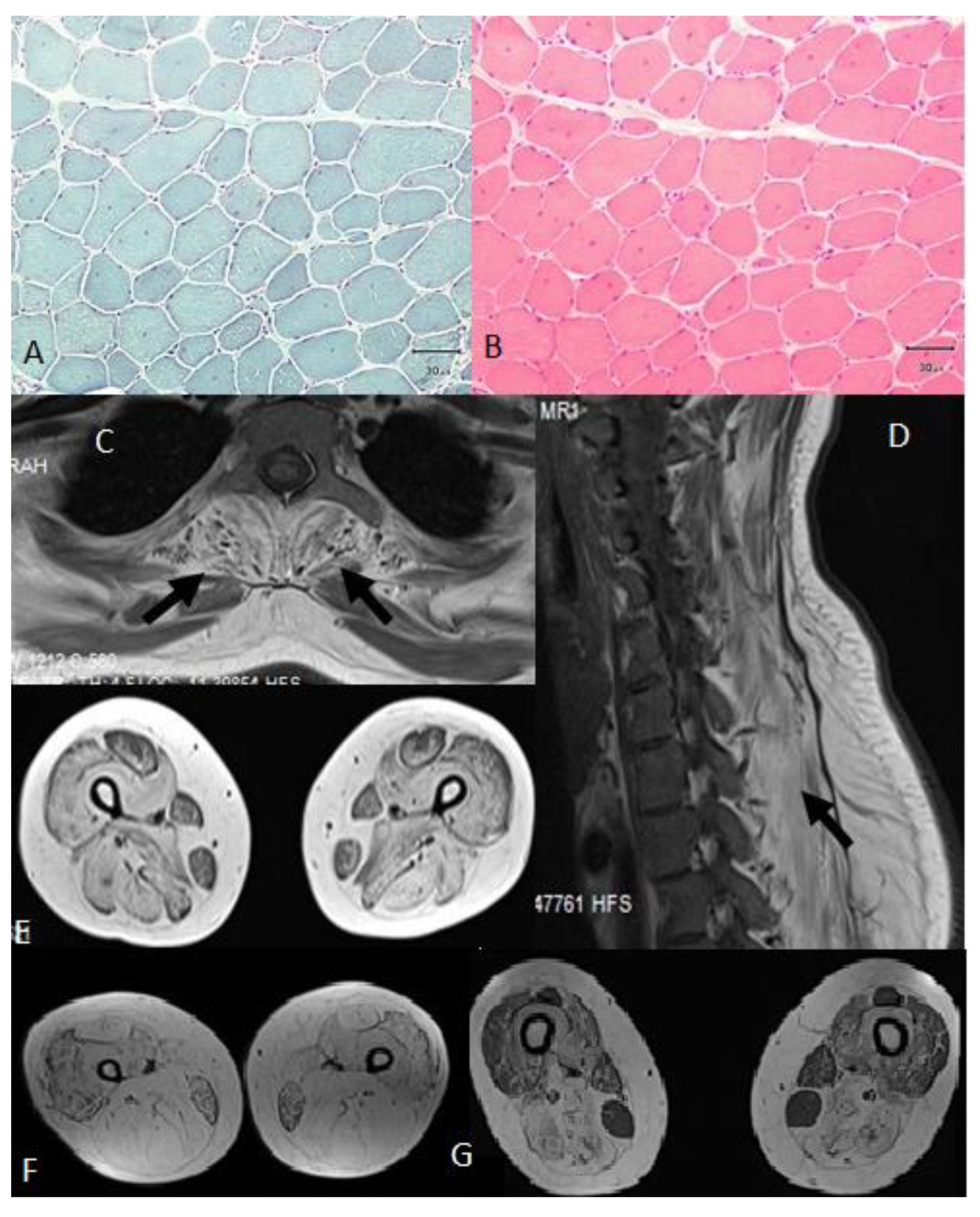 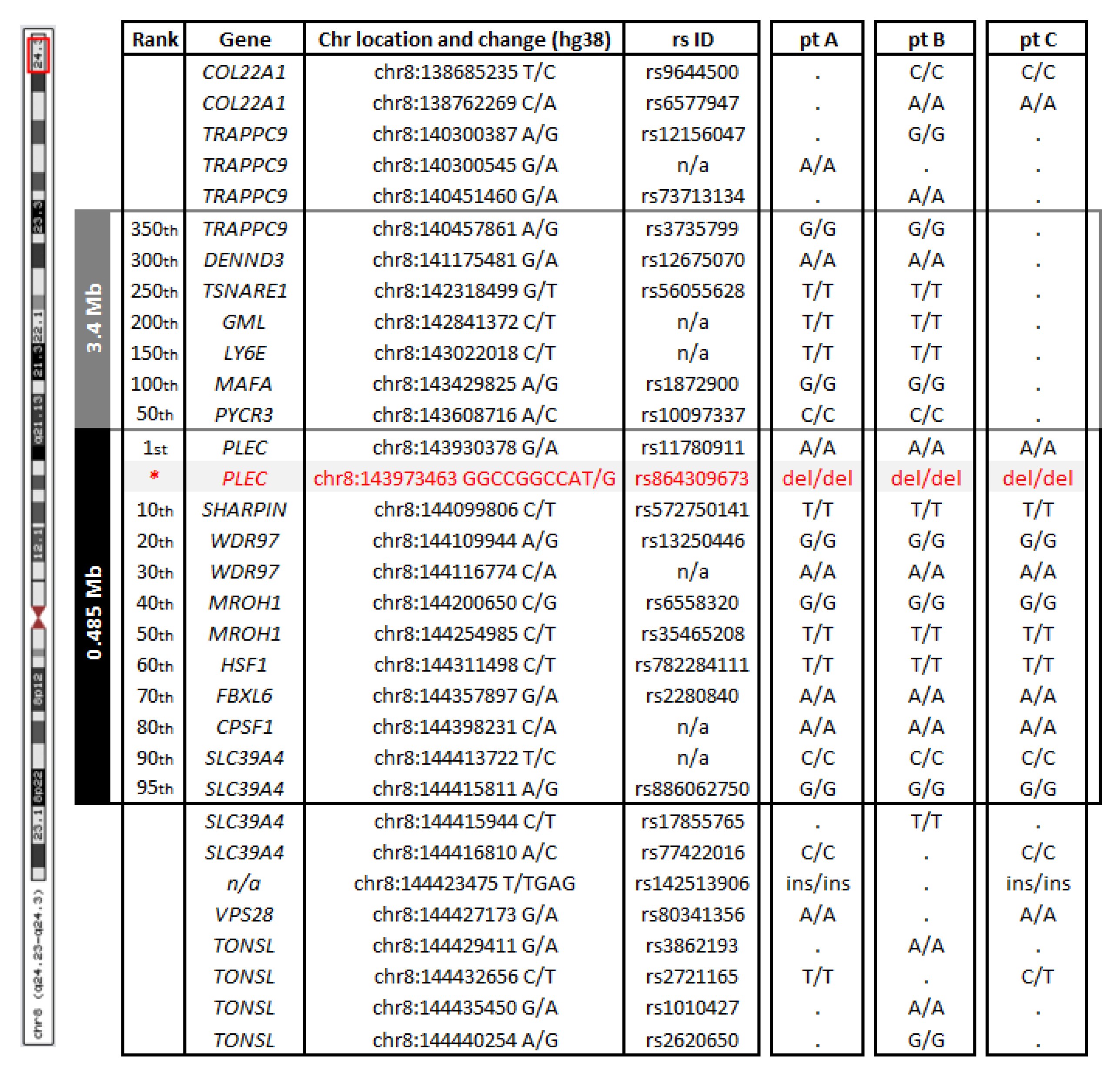