The Location of the Pseudoautosomal Boundary in Silene latifolia

Y-chromosomes contain a non-recombining region (NRY), and in many organisms it was shown that the NRY expanded over time. How and why the NRY expands remains unclear. Young sex chromosomes, where NRY expansion occurred recently or is on-going, offer an opportunity to study the causes of this process. Here, we used the plant Silene latifolia, where sex chromosomes evolved ~11 million years ago, to study the location of the boundary between the NRY and the recombining pseudoautosomal region (PAR). The previous work devoted to the NRY/PAR boundary in S. latifolia was based on a handful of genes with locations approximately known from the genetic map. Here, we report the analysis of 86 pseudoautosomal and sex-linked genes adjacent to the S. latifolia NRY/PAR boundary to establish the location of the boundary more precisely. We take advantage of the dense genetic map and polymorphism data from wild populations to identify 20 partially sex-linked genes located in the “fuzzy boundary”, that rarely recombines in male meiosis. Genes proximal to this fuzzy boundary show no evidence of recombination in males, while the genes distal to this partially-sex-linked region are actively recombining in males. Our results provide a more accurate location for the PAR boundary in S. latifolia, which will help to elucidate the causes of PAR boundary shifts leading to NRY expansion over time. View Full-Text
Keywords: sex chromosome; Silene latifolia; pseudoautosomal region; recombination sex chromosome; Silene latifolia; pseudoautosomal region; recombination
►▼ Show Figures 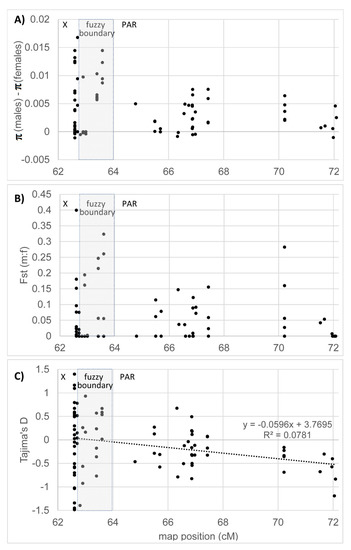