The ice cod Arctogadus glacialis (Peters, 1872) is one of the few fish species endemic to the Arctic. With a circumpolar distribution, the species is confined to the fjords and shelves of the Arctic seas. Biological information on A. glacialis is scarce, with genomic information restricted to microsatellites. Within the frame of the TUNU-Programme: Arctic Ocean Fishes—Diversity, Adaptation and Conservation, we studied A. glacialis at the chromosomal level to explore fish diversity and evolutionary aspects. The analysis of over 50 individuals from the Northeast Greenland fjords between latitudes 71°09′ N and 76°42′ N revealed a remarkable intraspecific diversity epitomized by chromosome numbers spanning from 28 to 33, the occurrence of putative B chromosomes, and diversified patterns of distribution of heterochromatin and rDNAs. The number of B chromosomes followed a latitudinal gradient from 0–2 in the north to 2–5 in the south. Considering the benthic and rather stationary life history of this species, the observed chromosomal differences might have arisen independently, possibly driven and/or fostered by the dynamics of repetitive sequences, and are being fixed in relatively isolated fjord populations. The resulting latitudinal cline we observe today might have repercussions on the fate of local populations facing the ongoing climate-driven environmental changes. View Full-Text
Keywords: ice cod; karyomorphs; B chromosomes; rDNA; Arctic ice cod; karyomorphs; B chromosomes; rDNA; Arctic
►▼ Show Figures 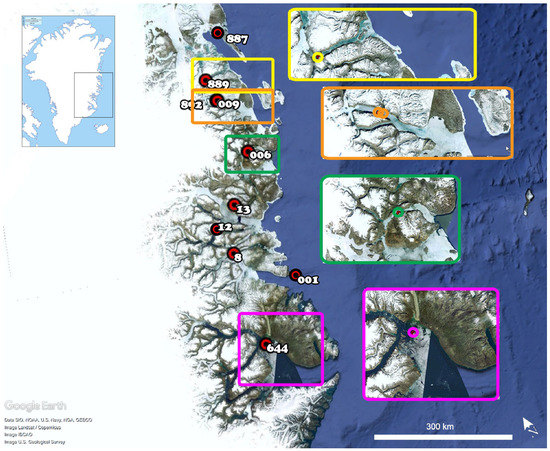