Pharmacogenomics for Primary Care: An Overview
Previous Article in Journal

Polypoidal choroidal vasculopathy (PCV) is usually regarded as a subtype of choroidal neovascularization (CNV) that is secondary to age-related macular degeneration (AMD) characterized by choroidal vessel branching, ending in polypoidal lesions. Despite their close association, PCV and neovascular AMD have shown differences, especially regarding patients’ treatment response. Currently, antivascular endothelial growth factor (anti-VEGF) drugs, such as ranibizumab, bevacizumab and aflibercept, have demonstrated their efficacy in CNV patients. However, in PCV, anti-VEGF treatments have shown inconclusive results. Many genetic polymorphisms have been associated with a variable response in exudative/wet AMD patients. Thus, the aim of this study is to explore the genetic variants affecting anti-VEGF drug response in PCV patients. In this regard, we performed a systematic review and meta-analysis. We found four variants (CFH I62V, CFH Y402H, ARMS2 A69S, and HTRA1-62A/G) that have been significantly related to response. Among them, the ARMS2 A69S variant is assessed in our meta-analysis. In conclusion, in order to implement anti-VEGF pharmacogenetics in clinical routines, further studies should be performed, distinguishing physio-pathogenic circumstances between PCV and exudative AMD and the combined effect on treatment response of different genetic variants. View Full-Text
Keywords: pharmacogenetics; personalized medicine; SNP; anti-VEGF; polypoidal choroidal vasculopathy pharmacogenetics; personalized medicine; SNP; anti-VEGF; polypoidal choroidal vasculopathy
►▼ Show Figures 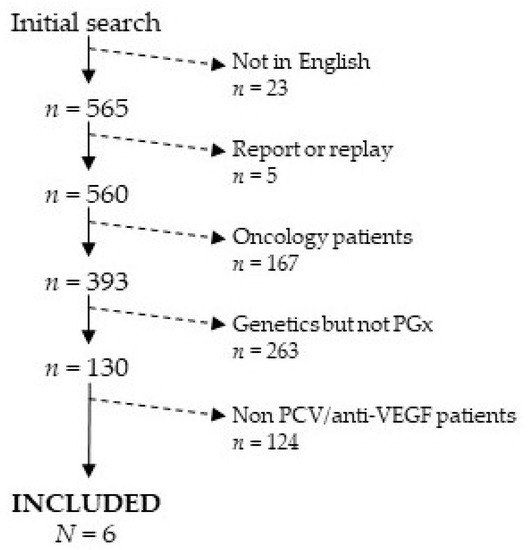