(1) Aims: Diabesity, defined as diabetes occurring in the context of obesity, is a serious health problem that is associated with an increased risk of premature heart attack, stroke, and death. To date, a key challenge has been to understand the molecular pathways that play significant roles in diabesity. In this study, we aimed to investigate the genetic links between diabetes and obesity in diabetic individuals and highlight the role(s) of shared genes in individuals with diabesity. (2) Methods: The interactions between the genes were analyzed using the Search Tool for the Retrieval of Interacting Genes (STRING) tool after the compilation of obesity genes associated with type 1 diabetes (T1D), type 2 diabetes (T2D), and maturity-onset diabetes of the young (MODY). Cytoscape plugins were utilized for enrichment analysis. (3) Results: We identified 546 obesity genes that are associated with T1D, T2D, and MODY. The network backbone of the identified genes comprised 514 nodes and 4126 edges with an estimated clustering coefficient of 0.242. The Molecular Complex Detection (MCODE) generated three clusters with a score of 33.61, 16.788, and 6.783, each. The highest-scoring nodes of the clusters were AGT, FGB, and LDLR genes. The genes from cluster 1 were enriched in FOXO-mediated transcription of oxidative stress, renin secretion, and regulation of lipolysis in adipocytes. The cluster 2 genes enriched in Src homology 2 domain-containing (SHC)-related events triggered by IGF1R, regulation of lipolysis in adipocytes, and GRB2: SOS produce a link to mitogen-activated protein kinase (MAPK) signaling for integrins. The cluster 3 genes ere enriched in IGF1R signaling cascade and insulin signaling pathway. (4) Conclusion: This study presents a platform to discover potential targets for diabesity treatment and helps in understanding the molecular mechanism. View Full-Text
Keywords: diabetes; T2D; T1D; MODY; obesity; diabesity; protein-protein interaction diabetes; T2D; T1D; MODY; obesity; diabesity; protein-protein interaction
►▼ Show Figures 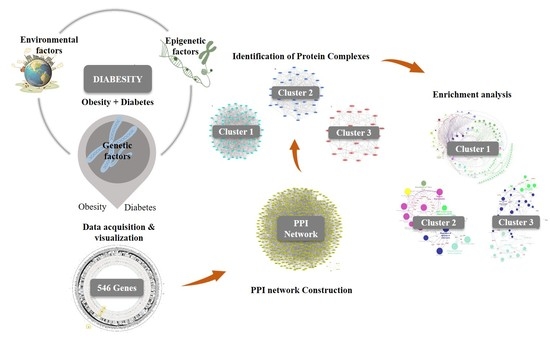