Methicillin-resistant Staphylococcus aureus (MRSA) strains are associated with serious complications and poor clinical outcome. In Egypt, they contribute to more than 70% of S. aureus healthcare-associated infections. This study combined whole-genome sequencing, bioinformatics, and statistical analyses to identify the phylogeny, resistome, virulome and potential genotype–phenotype–clinical correlation among 18 clinical isolates of MRSA in a tertiary hospital in Cairo, Egypt. The ST1535-V MRSA clone was the most frequently isolated (16.6%), followed by ST5-VI, ST1-V and ST239-III (11.1% each). SCCmec V, VI, IV and III types were detected at frequencies of 50%, 16.6%, 11.1% and 11.1%, respectively. None of the tested virulence genes were detected in all isolates, but they ranged in distribution from 1/18 to 17/18. The Panton–Valentine leukocidin (PVL)-encoding genes were detected in only four isolates and were enriched in isolates causing non-severe cases. Phylogenetic analysis revealed relatedness between three ST1535-Vs, two ST5-VIs, two ST239-IIIs and two ST1-Vs; however, only the two genetically related ST1-V isolates were epidemiologically linked. While disease outcome and source of infection had no correlation with a particular genotypic pattern, the sequence type was the most correlated factor with phylogeny and genotypic patterns, and a few genes were associated with non-severe cases. View Full-Text
Keywords: next-generation sequencing (NGS); whole-genome sequencing (WGS); methicillin- resistant Staphylococcus aureus (MRSA); virulome; resistome next-generation sequencing (NGS); whole-genome sequencing (WGS); methicillin- resistant Staphylococcus aureus (MRSA); virulome; resistome
►▼ Show Figures 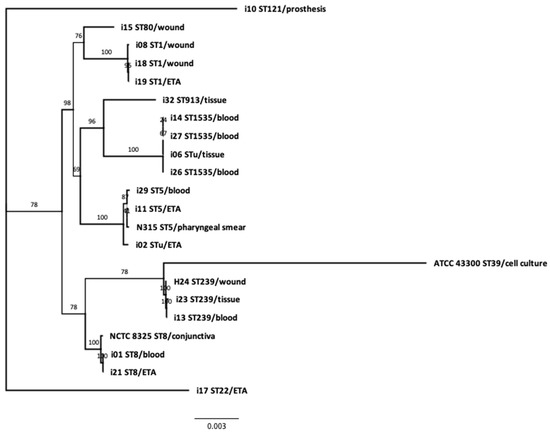