Chromatin Dynamics and Transcriptional Control of Circadian Rhythms in Arabidopsis

Circadian rhythms pervade nearly all aspects of plant growth, physiology, and development. Generation of the rhythms relies on an endogenous timing system or circadian clock that generates 24-h oscillations in multiple rhythmic outputs. At its bases, the plant circadian function relies on dynamic interactive networks of clock components that regulate each other to generate rhythms at specific phases during the day and night. From the initial discovery more than 13 years ago of a parallelism between the oscillations in chromatin status and the transcriptional rhythms of an Arabidopsis clock gene, a number of studies have later expanded considerably our view on the circadian epigenome and transcriptome landscapes. Here, we describe the most recent identification of chromatin-related factors that are able to directly interact with Arabidopsis clock proteins to shape the transcriptional waveforms of circadian gene expression and clock outputs. We discuss how changes in chromatin marks associate with transcript initiation, elongation, and the rhythms of nascent RNAs, and speculate on future interesting research directions in the field.
Keywords: Arabidopsis; circadian clock; chromatin; transcriptional rhythms Arabidopsis; circadian clock; chromatin; transcriptional rhythms

The circadian clock is an endogenous timing mechanism able to generate biological rhythms with a period of 24 h. Although the circadian system is daily synchronized by changes in light and temperature, it is also capable of sustaining the circadian oscillations under constant environmental conditions [1]. The circadian clock regulates an ample range of physiological, developmental and metabolic processes ensuring that they are appropriately phased in concordance with the cellular demands [2]. The mechanisms responsible for the generation of the rhythms are quite complex and involve the orchestrated expression and function of key essential components [3,4]. This molecular oscillator is exquisitely connected with synchronizing cues to timely drive the rhythms of the biological processes or rhythmic outputs controlled by the clock [5].
The circadian function is particularly important in plants, possibly due to their sessile nature and the need for constantly monitoring the environment for proper adaptation and survival. Indeed, the anticipatory function of the plant circadian system has been proposed to provide an adaptive advantage and improve fitness [6,7,8,9]. At its basis, a common mechanism responsible for the generation of rhythms in eukaryotic cells relies on circadian negative feedback loops of activators that drive the expression of negative components, which feedback to inhibit their own expression [10]. This basic transcriptional regulatory mechanism is complemented by additional layers of circadian control including among others chromatin regulation, RNA metabolism and changes in cellular and subcellular localization [11,12,13,14].
The molecular components of the plant circadian system have been extensively identified and characterized in the model plant Arabidopsis thaliana. Circadian studies on crops have also started to uncover the divergences but also the similarities of clock components in plant model systems and other crops [15,16]. The firstly identified Arabidopsis clock component, TIMING OF CAB EXPRESSION (TOC1) or PSEUDO RESPONSE REGULATOR1 (PRR1), was initially isolated nearly 25 years ago [17], and characterized as an evening-expressed gene, important in the regulation of circadian rhythms and flowering time [18,19,20,21,22,23]. Two additional clock components, CIRCADIAN CLOCK ASSOCIATED 1 (CCA1) and LATE ELONGATED HYPOCOTYL (LHY), were later identified and characterized [24,25]. CCA1 and LHY are two morning-expressed and partially redundant single MYB-containing proteins that form heterodimers to fulfill their circadian function [26,27]. TOC1, CCA1, and LHY were proposed to form a transcriptional feedback loop essential for circadian rhythmicity in Arabidopsis [20].
Research over the last years has contributed to extend our knowledge on the molecular circadian network, adding numerous new components and regulatory mechanisms [28]. For instance, other members of the PSEUDO RESPONSE REGULATOR (PRR) gene family including PRR3, PRR5, PRR7, and PRR9 [29,30] were found to be closely associated with the Arabidopsis clock [31,32]. The PRR gene family members are sequentially expressed, starting with PRR9 with a peak-phase closed to dawn, followed by PRR7 and PRR5 at midday and by TOC1 with a peak-phase of expression at dusk [19,29]. Other evening-expressed components include the EARLY FLOWERING 3 (ELF3) and ELF4 genes coding for two plant-specific proteins without recognizable domains [33,34] and LUX ARRHYTMO (LUX) coding for a single MYB-like GARP transcription factor [35,36]. These three clock proteins were first identified by genetic screens for components involved in flowering and hypocotyl regulation [33,37,38,39]. The proteins were found to interact forming a multi-protein complex called the EVENING COMPLEX (EC) [40,41]. Recent studies have indicated that the EC components may also have independent functions from the EC [42,43,44].
The main clock components engage in highly complex regulatory networks that ensure the specific phase of oscillator gene expression during the day and night (Figure 1). For instance, CCA1 and LHY repress the PRRs [45], which in turn suppress CCA1 and LHY transcription [31]. TOC1 not only represses CCA1 and LHY expression [46,47,48] but nearly all the oscillator genes by binding to their promoters [48]. The EC components are repressed by CCA1 and LHY in the morning [49,50,51] and by TOC1 in the evening [48]. In turn, the EC acts as a transcriptional repressor directly binding to the PRR9, PRR7, and LUX promoters and repressing their expression [52,53,54,55]. By repressing the repressors of CCA1 and LHY, the EC indirectly promotes CCA1 and LHY expression.
The identification of the regulatory function of the clock components uncovered a prevalent number of repressors, opening the question about the mechanisms of circadian transcriptional activation. Over the past recent years, a number of new components have been proposed to function as activators of clock gene expression (Figure 1). One example includes the LIGHT-REGULATED WD1 (LWD1) and LWD2 genes, encoding WD (Trp and Asp)-containing proteins [56]. The LWDs directly bind to the promoters of CCA1, PRR9, PRR5, and TOC1 to activate their expression [57,58]. Another example includes REVEILLE 8 (RVE8 also known as LHY-CCA1-LIKE5 or LCL5), a protein that belongs to the CCA1 and LHY single-MYB protein family [59,60]. Despite being members of the same family of plant transcription factors, RVE8 activates the expression of TOC1 and PRR5, thus, in an opposite way to the repressing function of CCA1 and LHY [59,61]. RVE8 also directly activates the expression of PRR9, ELF4 and LUX [62]. Other members of the RVE protein family appear to be functionally redundant with RVE8, as the rve4rve6rve8 triple mutant accentuates the long period phenotype of rve8 single mutant [62].
Overall, it is well established that generation of 24-h rhythms requires the accurate coordination of the expression and activities of numerous clock components. These components regulate each other through multiple regulatory mechanisms to ultimately control plant physiology and development in synchronization with the environment [12]. In this review, we focus on one of these regulatory mechanisms: chromatin changes and its connection with circadian transcriptional regulation. We do not attempt to provide an exhaustive description of all what is known related to the topic but rather to provide an update on the most recent and relevant discoveries functionally linking chromatin status and the plant circadian clock. Readers are encouraged to consult recent reviews that have in-depth descriptions on this and other specific topics [14,63,64].

Transcriptional regulation is intimately connected with chromatin status, which can be modified by changes in DNA methylation [65], histone covalent modifications [66,67], nucleosome remodeling and replacement of core histone with histone variants [68] and higher-order chromatin location and organization [69]. The four core histones (H2A, H2B, H3, and H4) can be modified at different amino acid residues by a repertoire of modifications such as acetylation, methylation, phosphorylation, ubiquitination, sumoylation, glycosylation, ADP ribosylation, biotinylation, and carbonylation [67]. These modifications are able to alter the accessibility of chromatin to the transcription machinery, thus influencing the transcriptional outcome [66].
Acetylation of histones is controlled by histone acetyltransferases (HATs) and has been mostly associated with gene activation [70]. Plants have multiple HATs [71], which have been functionally characterized to a different degree. One major class of plant HATs present homology with the yeast and Tetrahymena GCN5 (GENERAL CONTROL NONDEREPRESSIBLE 5) family [72]. GCN5 appears to be important in the regulation of many processes including cell differentiation, organogenesis, and responses to light and cold [73]. The acetylation of histones can be reverted by histone deacetylases such as RPD3 (REDUCED POTASSIUM DEPENDENCY PROTEIN 3)-like and SIR2 (SILENT INFORMATION REGULATOR PROTEIN 2)-like, which are conserved across all eukaryotes [70,71].
Histones can be also methylated by histone methyltransferases (HMTs) including a group of SET (SU(VAR)/E(Z)/TRX) domain proteins. Histone methylation is associated either with gene activation or with repression depending on the amino acid residue of the modification [74]. For instance, histone H3 methylation of lysine 4 (H3K4) or lysine 36 (H3K36) is generally associated with activation of gene expression, whereas methylation of lysine 9 (H3K9) or lysine 27 (H3K27) is usually related to heterochromatin and gene repression [74]. Histone methylation is also reversible through the action of histone demethylases such as lysine-specific demethylase 1 (LSD1) and Jumonji C (JmjC) domain-containing proteins, which play important roles in the regulation of plant growth and development [75].

Circadian studies are rapidly expanding our view on how the circadian system works in different parts of the plant, and how mobile signals are able to synchronize clocks in distal organs [109,110,111,112,113]. Over the past recent years, it has become increasingly clear that circadian information is shared through short- and long-distance communication. The strength of circadian cell-to-cell coupling differs among cells and tissues [114,115]. For example, coupling is minimum among cotyledon cells [116], variable in leaves [117,118,119], high in roots [120] and between the vasculature and neighbor mesophyll cells [121], and very high within cells at the shoot apex [122]. Long-distance circadian synchronization on the other hand, seems to occur through shoot-to-root photosynthetic signaling [123], light piping down the root [124] and by the movement of ELF4 from shoots to regulate the period of the root clock in a temperature-dependent manner [113]. The studies highlight specific and autonomous circadian function, which urgently calls for studies on changes of the chromatin status not only with a temporal resolution (circadian or seasonal) but also with spatial definition in order to identify cell, tissue-, and organ-specific circadian chromatin landscapes.
Likewise, over recent years, chromatin conformation capture approaches have provided an unprecedented three-dimensional view of chromatin organization [125]. Studies with animal cells have uncovered a hierarchical system with compartment, domains and loops, playing important roles in the control of transcription [126]. Similar studies in plants have now shown that plant cells contain comparable high-order structures [69] with the notable exception of the TAD-like loop domains found in mammals or the lack of a plant CTCF-like insulator protein [126]. It would be then interesting to fully understand the functional divergences of the high-order chromatin formation and organization in plants compared to animals. Responses of plant chromatin conformation to different environmental and cellular signals would be also interesting to elucidate, focusing on the functional connection between their formation and their specific biological functions. Circadian changes on chromatin conformation and nuclear localization in different tissues and organs would be also worth exploring. We surely have ahead many interesting discoveries within the plant circadian field.

A.M. and P.M. wrote and revise the review. All authors have read and agreed to the published version of the manuscript.

We apologize to those colleagues whose work was not included here due to space constraints. 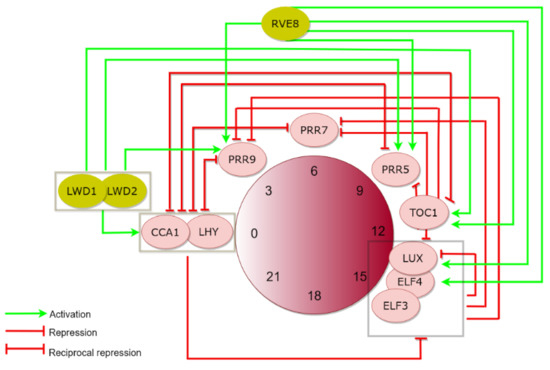 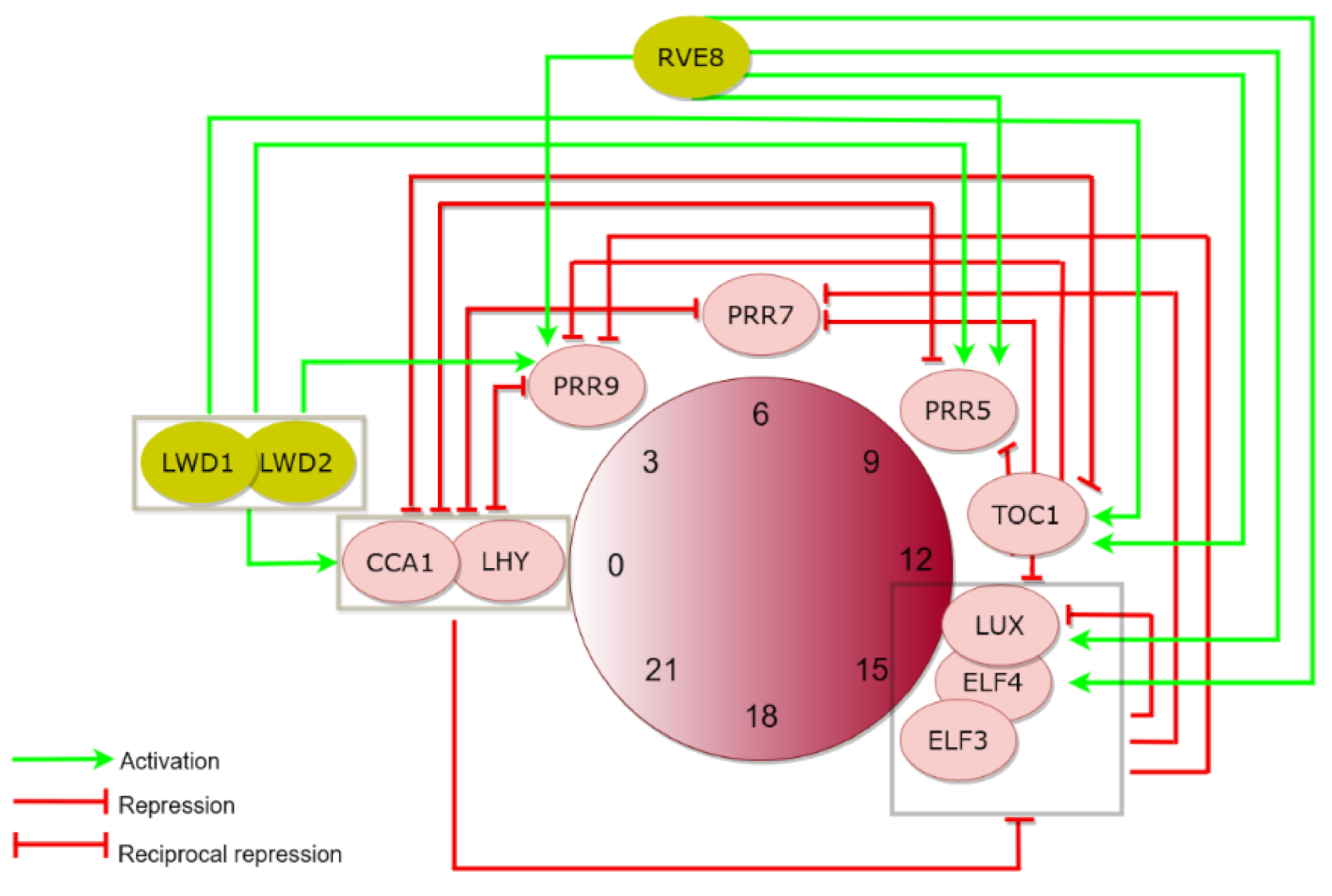