Severe oxalate nephropathy has been previously reported in sheep and is mostly associated with excessive oxalate in the diet. However, a rare native Dutch breed (Zwartbles) seems to be predisposed to an inherited juvenile form of primary hyperoxaluria and no causative genetic variant has been described so far. This study aims to characterize the phenotype and genetic etiology of the inherited metabolic disease observed in several purebred Zwartbles sheep. Affected animals present with a wide range of clinical signs including condition loss, inappetence, malaise, and, occasionally, respiratory signs, as well as an apparent sudden unexpected death. Histopathology revealed widespread oxalate crystal deposition in kidneys of the cases. Whole-genome sequencing of two affected sheep identified a missense variant in the ovine AGXT gene (c.584G>A; p.Cys195Tyr). Variants in AGXT are known to cause type I primary hyperoxaluria in dogs and humans. Herein, we present evidence that the observed clinicopathological phenotype can be described as a form of ovine type I primary hyperoxaluria. This disorder is explained by a breed-specific recessively inherited pathogenic AGXT variant. Genetic testing enables selection against this fatal disorder in Zwartbles sheep as well as more precise diagnosis in animals with similar clinical phenotype. Our results have been incorporated in the Online Mendelian Inheritance in Animals (OMIA) database (OMIA 001672-9940). View Full-Text
Keywords: Ovis aries; oxalate nephropathy; whole-genome sequencing; metabolic disease; precision medicine; genetic test Ovis aries; oxalate nephropathy; whole-genome sequencing; metabolic disease; precision medicine; genetic test
►▼ Show Figures 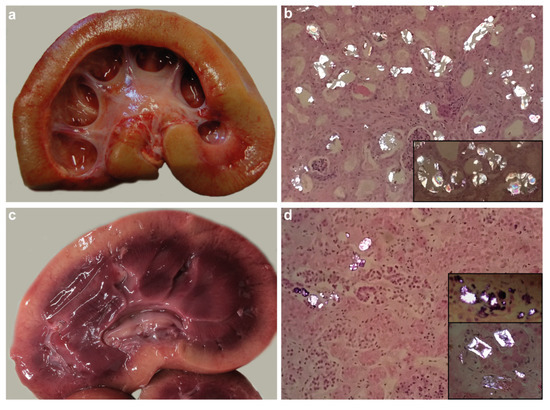