Bone Marrow Clonogenic Myeloid Progenitors from NPM1-Mutated AML Patients Do Not Harbor the NPM1 Mutation: Implication for the Cell-Of-Origin of NPM1+ AML

Dogs exhibit a wide variety of coat color types, and many genes have been identified that control pigment production, appearance, and distribution. Some breeds, such as the Nova Scotia Duck Tolling Retriever (NSDTR), exhibit variation in pheomelanin pigment intensity that is not explained by known genetic variants. A genome-wide association study comparing light red to dark red in the NSDTR identified a significantly associated region on canine chromosome 15 (CFA 15:23 Mb–38 Mb). Coverage analysis of whole genome sequence data from eight dogs identified a 6 kb copy number variant (CNV) 152 kb upstream of KITLG. Genotyping with digital droplet PCR (ddPCR) confirmed a significant association between an increased copy number with the dark-red coat color in NSDTR (p = 6.1 × 10−7). The copy number of the CNV was also significantly associated with coat color variation in both eumelanin and pheomelanin-based Poodles (p = 1.5 × 10−8, 4.0 × 10−9) and across other breeds. Moreover, the copy number correlated with pigment intensity along the hair shaft in both pheomelanin and eumelanin coats. KITLG plays an important role in melanogenesis, and variants upstream of KITLG have been associated with coat color variation in mice as well as hair color in humans consistent with its role in the domestic dog. View Full-Text
Keywords: canine; coat color; pheomelanin; eumelanin; dilution canine; coat color; pheomelanin; eumelanin; dilution
►▼ Show Figures 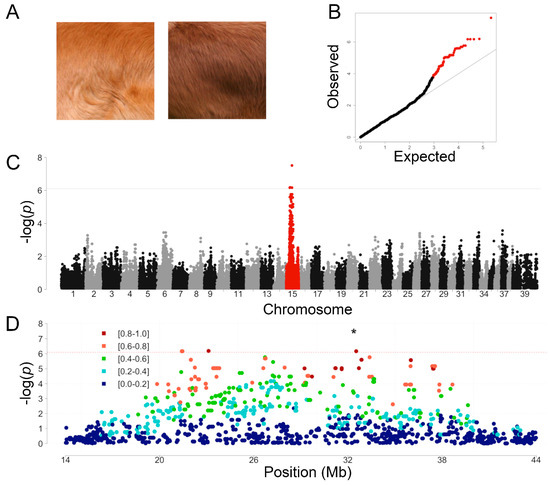