Radish (Raphanus sativus L.) is an important root vegetable worldwide. The development of F1 hybrids, which are extensively used for commercial radish production, relies on cytoplasmic male sterility (CMS). To identify candidate genes responsible for CMS in NWB cytoplasm, we sequenced the normal and NWB CMS radish mitochondrial genomes via next-generation sequencing. A comparative analysis revealed 18 syntenic blocks and 11 unique regions in the NWB CMS mitogenome. A detailed examination indicated that orf463a was the most likely causal factor for male sterility in NWB cytoplasm. Interestingly, orf463a was identical to orf463, which is responsible for CMS in Dongbu cytoplasmic and genic male sterility (DCGMS) radish. Moreover, only structural variations were detected between the NWB CMS and DCGMS mitochondrial genomes, with no nucleotide polymorphisms (SNPs) or meaningful indels. Further analyses revealed these two mitochondrial genomes are coexisting isomeric forms belonging to the same mitotype. orf463a was more highly expressed in flower buds than in vegetative organs and its expression was differentially regulated in the presence of restorer of fertility (Rf) genes. orf463a was confirmed to originate from Raphanus raphanistrum. In this study, we identified a candidate gene responsible for the CMS in NWB cytoplasm and clarified the relationship between NWB CMS and DCGMS. View Full-Text
Keywords: cytoplasmic male sterility; DCGMS; NWB CMS; orf463a; radish cytoplasmic male sterility; DCGMS; NWB CMS; orf463a; radish
►▼ Show Figures 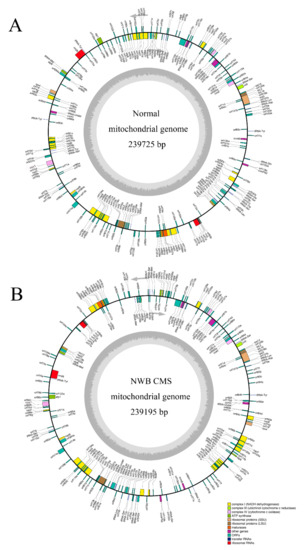