Transcriptional Analysis of FOXO1, C/EBP-α and PPAR-γ2 Genes and Their Association with Obesity-Related Insulin Resistance
Previous Article in Special Issue

The Genomics of Streptococcus pneumoniae Carriage Isolates from UK Children and Their Household Contacts, Pre-PCV7 to Post-PCV13

A diverse set of mobile genetic elements (MGEs) transmit between Streptococcus pneumoniae cells, but many isolates remain uninfected. The best-characterised defences against horizontal transmission of MGEs are restriction-modification systems (RMSs), of which there are two phase-variable examples in S. pneumoniae. Additionally, the transformation machinery has been proposed to limit vertical transmission of chromosomally integrated MGEs. This work describes how these mechanisms can act in concert. Experimental data demonstrate RMS phase variation occurs at a sub-maximal rate. Simulations suggest this may be optimal if MGEs are sometimes vertically inherited, as it reduces the probability that an infected cell will switch between RMS variants while the MGE is invading the population, and thereby undermine the restriction barrier. Such vertically inherited MGEs can be deleted by transformation. The lack of between-strain transformation hotspots at known prophage att sites suggests transformation cannot remove an MGE from a strain in which it is fixed. However, simulations confirmed that transformation was nevertheless effective at preventing the spread of MGEs into a previously uninfected cell population, if a recombination barrier existed between co-colonising strains. Further simulations combining these effects of phase variable RMSs and transformation found they synergistically inhibited MGEs spreading, through limiting both vertical and horizontal transmission. View Full-Text
Keywords: Streptococcus pneumoniae; pneumococcus; restriction-modification system; phase variation; transformation; recombination; mobile genetic elements; prophage Streptococcus pneumoniae; pneumococcus; restriction-modification system; phase variation; transformation; recombination; mobile genetic elements; prophage
►▼ Show Figures 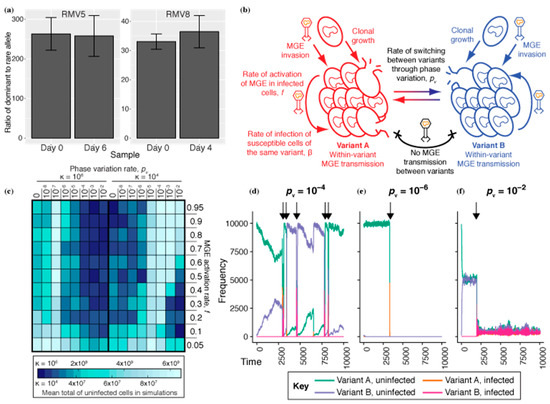