The NAC (NAM, ATAF, and CUC) family is one of the largest families of plant-specific transcription factors. It is involved in many plant growth and development processes, as well as abiotic/biotic stress responses. So far, little is known about the NAC family in Chenopodium quinoa. In the present study, a total of 90 NACs were identified in quinoa (named as CqNAC1-CqNAC90) and phylogenetically divided into 14 distinct subfamilies. Different subfamilies showed diversities in gene proportions, exon–intron structures, and motif compositions. In addition, 28 CqNAC duplication events were investigated, and a strong subfamily preference was found during the NAC expansion in quinoa, indicating that the duplication event was not random across NAC subfamilies during quinoa evolution. Moreover, the analysis of Ka/Ks (non-synonymous substitution rate/synonymous substitution rate) ratios suggested that the duplicated CqNACs might have mainly experienced purifying selection pressure with limited functional divergence. Additionally, 11 selected CqNACs showed significant tissue-specific expression patterns, and all the CqNACs were positively regulated in response to salt stress. The result provided evidence for selecting candidate genes for further characterization in tissue/organ specificity and their functional involvement in quinoa’s strong salinity tolerance. View Full-Text
Keywords: quinoa (Chenopodium quinoa); NAC transcription factor family; phylogenetic analysis; gene expression patterns quinoa (Chenopodium quinoa); NAC transcription factor family; phylogenetic analysis; gene expression patterns
►▼ Show Figures 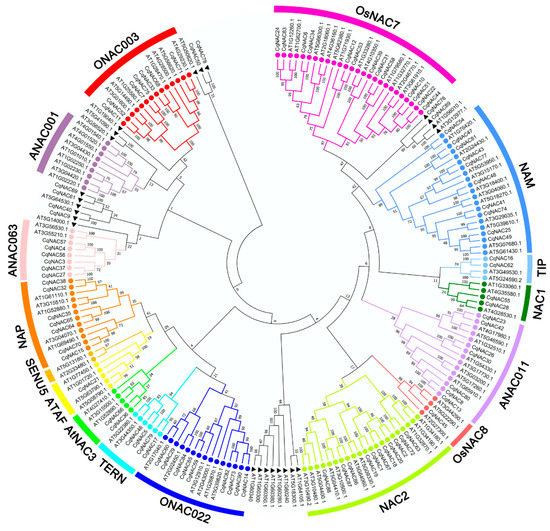