Anthocyanins is the main representative of flavonoids in blueberry fruits. The anthocyanins biosynthetic pathway has been extensively studied in numerous model plants and fruit crops at biochemical, genetic, and molecular levels. However, the mechanisms by which the MYB transcription factor/basic helix-loop-helix (bHLH) domain protein/WD-repeat (MYB-bHLH-WD40) complexes regulate anthocyanin biosynthesis in blueberry is still limited. In the present study, we identified 11 MYB, 7 bHLH, and 6 WD40 genes in blueberry fruits, using amino acid sequences of homologous MYB-bHLH-WD40 complexes in Arabidopsis, apple, grape, and strawberry. To understand these mechanisms, the expression patterns of MYB-bHLH-WD40 genes were examined and validated using differentially expressed gene (DEG) analysis and quantitative real-time reverse transcription PCR (qRT-PCR), respectively. The expression patterns of MYB-bHLH-WD40 genes positively correlated with anthocyanin accumulation and color development in blueberry fruits. Consistent with the effects of other transcriptional regulators, the VcMYBL1::GFP, VcbHLH1::GFP, and VcWDL2::GFP fusion proteins were only observed in the nucleus. The protein-protein interactions (PPIs) and bimolecular fluorescence complementation (BiFC) assay suggested a possible link between VcbHLHL1 and VcMYBL1. Finally, a model was proposed and discussed for how the expression of the MYB-bHLH-WD40 complexes can promote anthocyanin biosynthesis in blueberry fruits. To our knowledge, this study was the first to evaluate MYB-bHLH-WD40 complexes in blueberry fruits, and it provides a foundation to dissect the function of the mechanism.
Keywords: Vaccinium corymbosum; transcription factors; flavonoids; fruit ripening Vaccinium corymbosum; transcription factors; flavonoids; fruit ripening

Blueberries (Vaccinium corymbosum), also known as lingonberries, are perennial flowering shrubs with indigo-colored berries. They are classified in the section Cyanococcus within the genus Vaccinium of the Ericaceae [1,2]. The popularity of the blueberry as an economically important small fruit crop is mainly the result of its unique flavor, rich nutrients, and prevention of multiple diseases. These quality traits are largely determined by the anthocyanins. Anthocyanins as an important class of flavonoids in plant polyphenols, not only determine the color of the fruit [3,4], but also the main source of antioxidant activity in the blueberry fruit [5,6,7]. The anthocyanins contained in the blueberry fruit have a certain effect on improving vision, delaying memory decline, reducing the incidence of cardiovascular and cerebrovascular diseases and cancer, and resisting oxidation. They are listed as one of the top five human health foods by the Food and Agriculture Organization [8,9].
Anthocyanins are the main representatives of flavonoids in the blueberry fruit. The flavonoid biosynthetic pathway has been extensively studied in numerous model plant and fruit crops at biochemical, genetic, and molecular levels [10,11,12,13,14]. Several genes encoding the biosynthetic enzymes and transcription factors (TF) of this pathway have been extensively studied in maize, Arabidopsis, petunia, tobacco, and fruit crops, such as grape, apple, strawberry, and others [15,16,17,18,19,20,21,22,23,24,25]. In maize, the transcriptional regulation of anthocyanins biosynthesis is through the MYB transcription factor/basic helix-loop-helix (bHLH) domain protein/WD-repeat (MYB-bHLH-WD40) protein complex activated by the structural genes, in which the bHLH member plays a central role and interacts with the MYB and WD40 TF protein [26,27,28]. In Arabidopsis, the anthocyanin biosynthetic gene is also regulated by the MYB-bHLH-WD40 complex, although it can be activated by the R2R3-MYB transcription factor alone at an early stage [29].
The anthocyanin biosynthetic pathway is also described in fruit crops. The anthocyanin synthesis models of strawberry and apple are similar to that of Arabidopsis. The strawberry MYB-bHLH-WD40 regulatory complexes (FaMYB9, FaMYB11, FabHLH3, and FaTTG1) show homology to AtTT2, AtTT8, and AtTTG1, and the abundance of anthocyanins and procyanidins in apples are regulated by the WD40 protein MdTTG1, though it only interacts with bHLH. In grape, the MYB-bHLH-WD40 complexes are involved in the transcriptional regulation, via the VvMYB5B, VvMYBCS1, VvMYC1, VvMYCA1, and VvWD genes [30,31,32,33,34]. However, there is still limited information available on the transcriptional regulation of the anthocyanin biosynthesis pathway via the MYB-bHLH-WD40 protein complexes in blueberry fruits.
To gain more insight into the regulation of anthocyanin biosynthesis during blueberry fruit and color development, the transcriptome sequencing data released with our previous publication [35] including green, pink, and blue fruit developments were further explored. In the present study, 11 MYB, 7 bHLH, and 6 WD40 genes were obtained from blueberry fruits, using amino acid sequences of homologous MYB-bHLH-WD40 complexes in Arabidopsis, apple, grape, and strawberry. The MYB-bHLH-WD40 gene expression patterns positively correlated with anthocyanin accumulation in the blueberry fruit and color development. Consistent with their roles as the transcriptional regulator, VcMYBL1::GFP, VcbHLH1::GFP, and VcWDL2::GFP fusion proteins were observed only in the nucleus. The protein–protein interactions (PPIs) and bimolecular fluorescence complementation (BiFC) assay suggested a possible link between VcMYBL1 and VcbHLHL1. Finally, a potential model, in which MYB-bHLH-WD40 complexes play a role in regulating anthocyanin biosynthesis in blueberry fruits, is discussed.

The fruits were randomly sampled at 45 days (green fruits), 65 days (pink fruits), or 85 days (blue fruits) after flowering in the field from 6-year-old healthy blueberry plants. All the samples were snap frozen in liquid nitrogen and stored for subsequent experiments. The anthocyanin of the blueberry fruits was extracted and analyzed using the pH differential method, and the details were as previously reported in [35]. All the experiments were repeated three times.

To identify the expression patterns of the MYB-bHLH-WD40 genes, the transcriptome sequencing of the blueberry data during fruit and color development from our previously published study was further explored [35]. The gene expression levels were calculated using the fragments per kilobase per million reads (FPKM) method [40]. P-values were adjusted for multiple testing, using the Benjamini–Hochberg false discovery rate (FDR) correction. On the basis of the applied thresholds FDR < 0.01 and log2 (foldchange) ≥ 2, the differentially expressed genes (DEGs) analysis was performed by comparing the expression levels.

To determine the subcellular localization of the proteins, the ORF of VcMYBL1, VcbHLHL1, or VcWD40L2 was fused to the N-terminus of the green fluorescent protein (GFP) in the pBI-121 vector, and its expression was driven by the constitutive 35S CaMV promoter. Empty free GFP was used as a control. Protoplast isolation and transformation were performed, as reported previously in Reference [41]. Fluorescence of the GFP in the transformed protoplasts was imagined using confocal laser scanning and it was detected using a laser confocal microscope.

We used the vectors pSPYNE-35S and pSPYCE-35S and the cotransfection vector 35S:P19 to construct a bimolecular fluorescent complementary (BiFC) plasmid vector. For the first time, the VcMYBL1 gene ORF was inserted into the vector pSPYNE-35S, while the VcbHLHL1 gene ORF was inserted into the vector pSPYCE-35S. Both the vectors contained the N- or C-terminus, encoding the yellow fluorescent protein (YFP). Protoplast isolation and transformation were then performed, as previously reported in Reference [41]. Finally, fluorescence of the YFP in the transformed protoplasts was imagined, using confocal laser scanning, and it was detected using a laser confocal microscope.

Quantitative real-time reverse transcription PCR (RT-qPCR) was performed to confirm the DEGs analysis. The blueberry fruits of developmental stages (green, pink, and blue fruits) were sampled. We used the Plant RNA kit (Aidlab-Biotech, Beijing, China) to extract the total messenger RNA (mRNA). The RT-qPCR reactions were performed in a real-time PCR system using SYBR Green (Applied Biosystems, Foster City, CA, USA), according to the manufacturer’s instructions. The GADPH house keeping gene was used as a reference, and the RNA relative expression of each gene was calculated using the 2-ΔΔCT method [35,43]. The RT-qPCR reactions were repeated three times. The specific primers are shown in Table S4.

The phylogenetic analysis was executed to determine the relationships. As shown in the phylogenetic trees (Figure 1), the highest similarities to the homologous MYB and bHLH TFs were VcMYBL1 and VcbHLHL1. VcMYBL1 had a 56.74% identity to MdMYB11 and 52.7% identity to FaMYB11. VcbHLHL1 had a 92.85% identity to VvMYC1. VcWD40L2 was the most similar to the WD40 gene compared to other plants.

All the MYB-bHLH-WD40 genes were expressed in the three blueberry fruit developmental stages: Green (S1), pink (S2), and blue (S3) (Figure 2A). The fruit developmental stages were chosen because of their difference in anthocyanin content. As expected, in the green (S1) developmental stage, anthocyanins were detected at low levels. Based on blueberry fruit growth and ripening, at the fruit’s mature stage (blue) (S3), the level of anthocyanin increases dramatically (Figure 2B).
Among the MYB-bHLH-WD40 genes, some of the VcMYBL genes generated the higher level transcripts, especially the VcMYBL1 genes, while the genes VcMYBL2, VcMYBL4, etc., remained stable. These results were consistent with previous other plant species findings [44]. We also analyzed the expression patterns of the VcbHLHL and VcWD40L genes (Figure 2C–E). The qRT–PCR was performed to confirm the results, showing similar trends in the differentially expressed gene (DEG) analysis (Figure 3). The anthocyanin synthesis model of blueberry fruits may be similar to that of Arabidopsis, apple, grape, and strawberry. These MYB-bHLH-WD40 complex gene members, VcMYBL1, VcbHLHL1, and VcWD40L2, were identified as being involved in the regulation of the anthocyanin biosynthesis pathway during blueberry fruit ripening and color development [19,20,30,31,32,33,34].

In general, the transcription factors and coactivators must be localized in the nucleus to exert their regulatory effects [37]. In the cells containing the empty free GFP construct, GFP fluorescence was observed in both the cytoplasm and the nucleus, but the GFP fluorescence was detected only in the nuclei of cells containing the VcMYBL1::GFP, VcbHLH1::GFP, and VcWDL2::GFP fusion gene (Figure 4). Therefore, the predicted VcMYBL1::GFP, VcbHLH1::GFP, and VcWDL2::GFP proteins localize to the nucleus, supporting the view that it may be involved in the transcription regulation.

3.5. How Expression of MYB-bHLH-WD40 Complexes Can Promote Anthocyanin Biosynthesis in Blueberry Fruits

This research was supported by the China Postdoctoral Science Foundation (2015M572605), the Natural Science Basic Research Plan in the Shaanxi Province of China (2017JQ3027), the Fundamental Research Funds for the Central Universities (2452015042), the Research Fund for the Doctoral Program of Higher Education of Northwest A&F University (2013BSJJ045), and the Shaanxi Province Special Supporting Funds (Z111021511).

We thank editor and the two reviewers very much spending much time to give us helpful comments to improve our work. 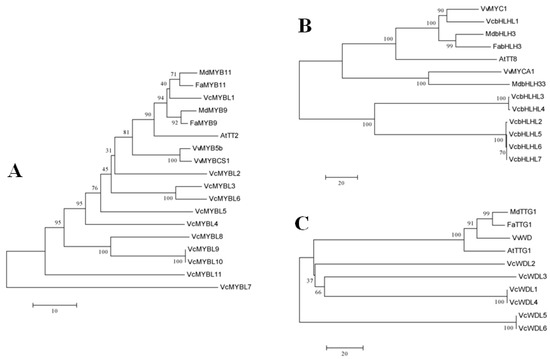 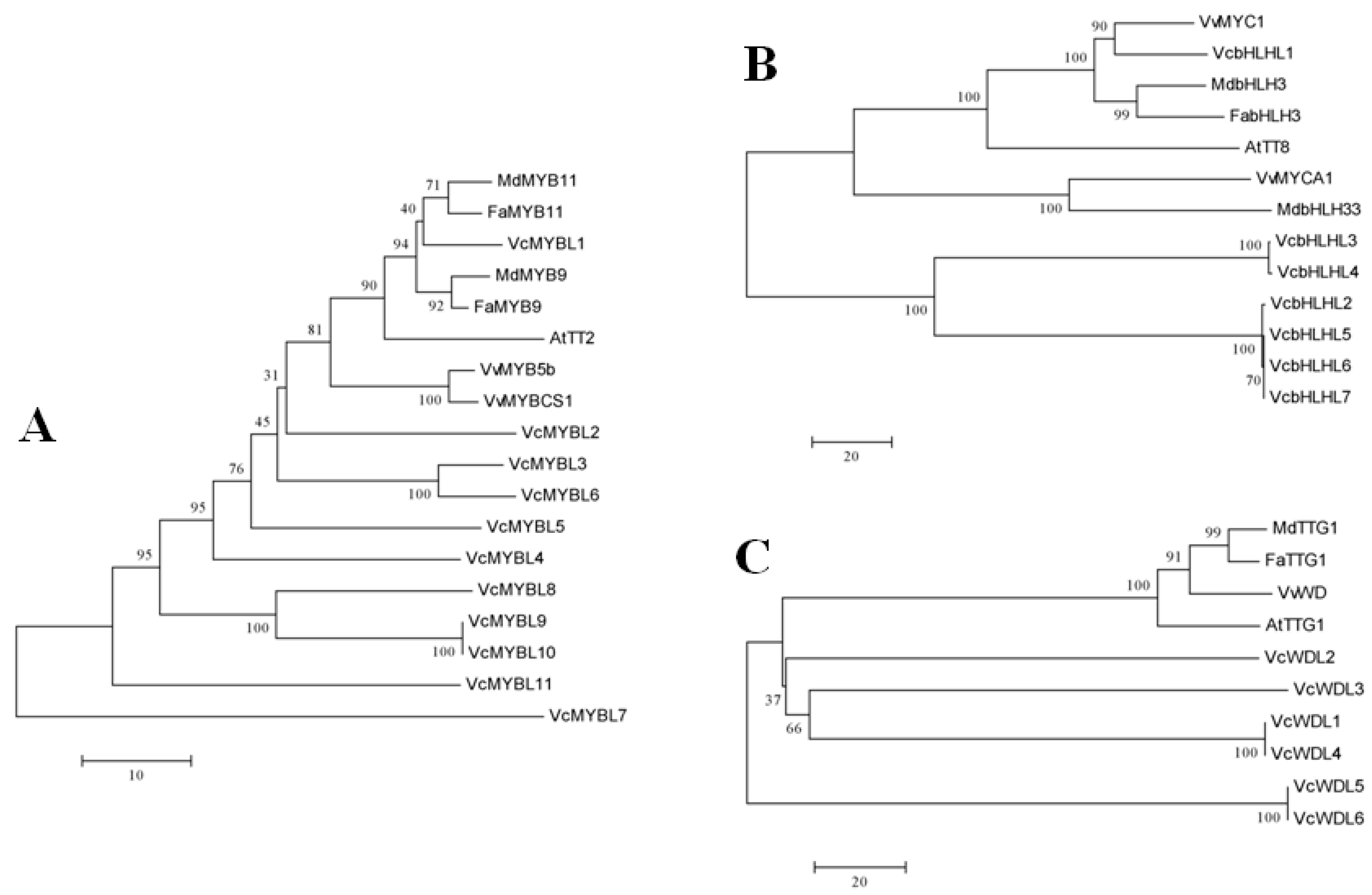 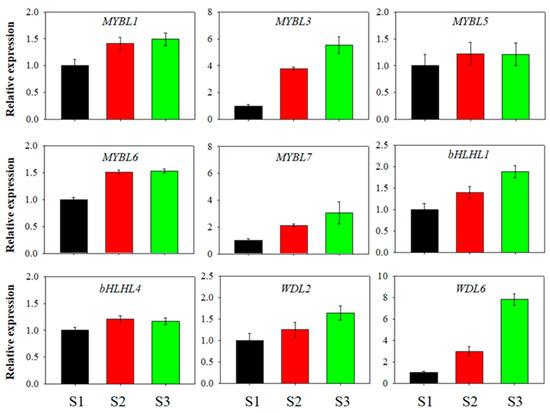 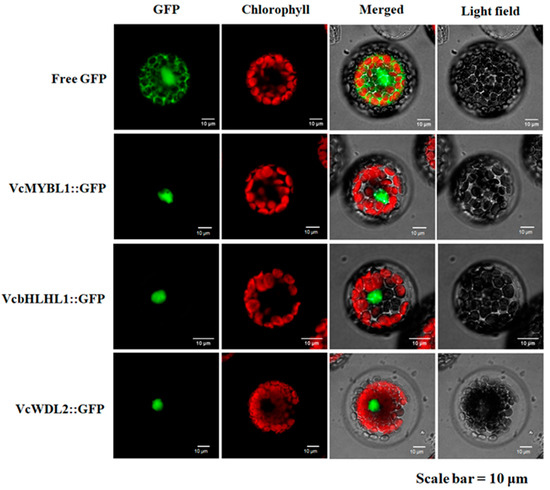 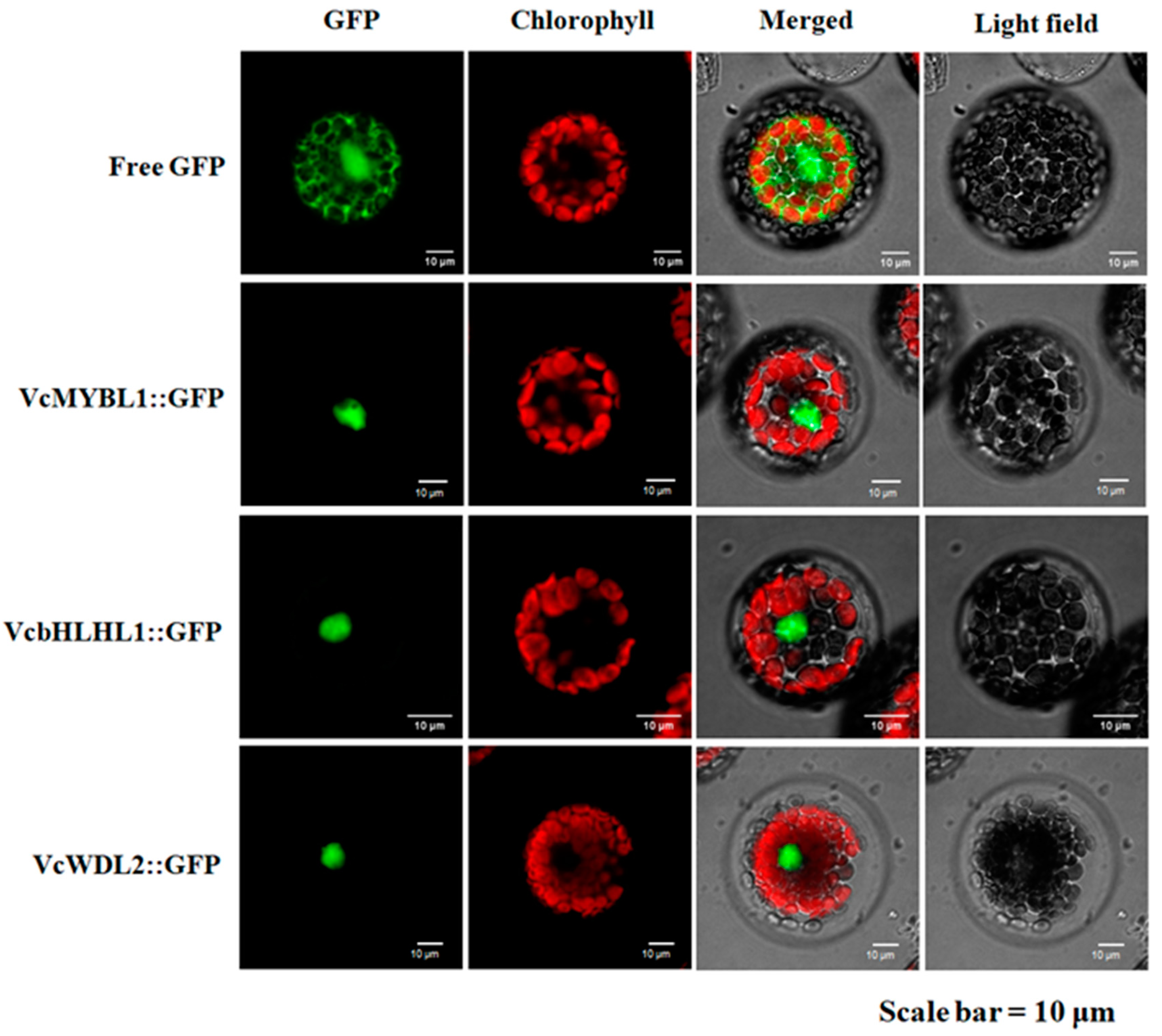