Characterization of Aminoacyl-tRNA Synthetases in Chromerids
Previous Article in Journal

Sexual reproduction plays a fundamental role in diatom life cycles. It contributes to increasing genetic diversity through meiotic recombination and also represents the phase where large-sized cells are produced to counteract the cell size reduction process that characterizes these microalgae. With the aim to identify genes linked to the sexual phase of the centric planktonic diatom Skeletonema marinoi, we carried out an RNA-seq experiment comparing the expression level of transcripts in sexualized cells with that of large cells not competent for sex. A set of genes involved in meiosis were found upregulated. Despite the fact that flagellate gametes were observed in the sample, we did not detect the expression of genes involved in the synthesis of flagella that were upregulated during sexual reproduction in another centric diatom. A comparison with the set of genes changing during the first phases of sexual reproduction of the pennate diatom Pseudo-nitzschia multistriata revealed the existence of commonalities, including the strong upregulation of genes with an unknown function that we named Sex Induced Genes (SIG). Our results further broadened the panel of genes that can be used as a marker for sexual reproduction of diatoms, crucial for the interpretation of metatranscriptomic datasets. View Full-Text
Keywords: diatom; sexual reproduction; Skeletonema marinoi; transcriptomics; meiosis; flagella; sex induced genes (SIG) diatom; sexual reproduction; Skeletonema marinoi; transcriptomics; meiosis; flagella; sex induced genes (SIG)
►▼ Show Figures 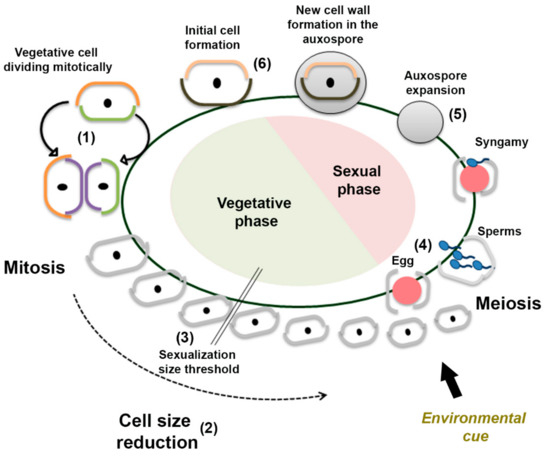