Transposable elements (TEs) play an important role in shaping genomic organization and structure, and may cause dramatic changes in phenotypes. Despite the genetic load they may impose on their host and their importance in microevolutionary processes such as adaptation and speciation, the number of population genetics studies focused on TEs has been rather limited so far compared to single nucleotide polymorphisms (SNPs). Here, we review the current knowledge about the dynamics of transposable elements at recent evolutionary time scales, and discuss the mechanisms that condition their abundance and frequency. We first discuss non-adaptive mechanisms such as purifying selection and the variable rates of transposition and elimination, and then focus on positive and balancing selection, to finally conclude on the potential role of TEs in causing genomic incompatibilities and eventually speciation. We also suggest possible ways to better model TEs dynamics in a population genomics context by incorporating recent advances in TEs into the rich information provided by SNPs about the demography, selection, and intrinsic properties of genomes. View Full-Text
Keywords: transposable elements; population genetics; selection; drift; coevolution transposable elements; population genetics; selection; drift; coevolution
►▼ Show Figures 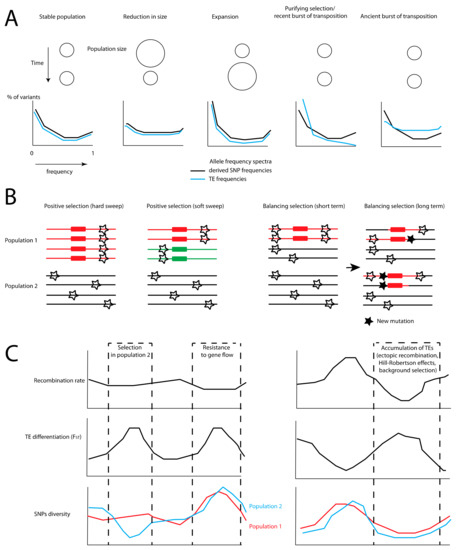