Wheat is a staple food commodity grown worldwide, and wheat starch is a valuable source of energy and carbon that constitutes 80% of the grain weight. Manipulation of genes involved in starch synthesis significantly affects wheat grain weight and yield. TaSSIV plays an important role in starch synthesis and its main function is granule formation. To mine and stack more favorable alleles, single nucleotide polymorphisms (SNPs) of TaSSIV-A, B, and D were investigated across 362 wheat accessions by Ecotype-Targeting Induced Local Lesions IN Genome (EcoTILLING). As a result, a total of 38 SNPs in the amplified regions of three TaSSIV genes were identified, of which 10, 15, and 13 were in TaSSIV-A, B, and D, respectively. These 38 SNPs were evaluated by using KASP and six SNPs showed an allele frequency >5% whereas the rest were <5%, i.e., considered to be minor alleles. In the Chinese mini core collection, three haplotypes were detected for TaSSIV–A and three for TaSSIV–B. The results of an association study in the Chinese mini core collection with thousand grain weight (TGW) and spike length (SPL) showed that Hap-2-1A was significantly associated with TGW and Hap-3-1B with SPL. Allelic frequency and geographic distribution indicated that the favored haplotype (Hap-2-1A) has been positively selected in Chinese wheat breeding. These results suggested that the Kompetitive Allele Specific PCR (KASP) markers can be applied in starch improvement to ultimately improve wheat yield by marker assisted selection in wheat breeding. View Full-Text
Keywords: starch; TaSSIV; EcoTILLING; polymorphism; KASP; haplotype starch; TaSSIV; EcoTILLING; polymorphism; KASP; haplotype
►▼ Show Figures 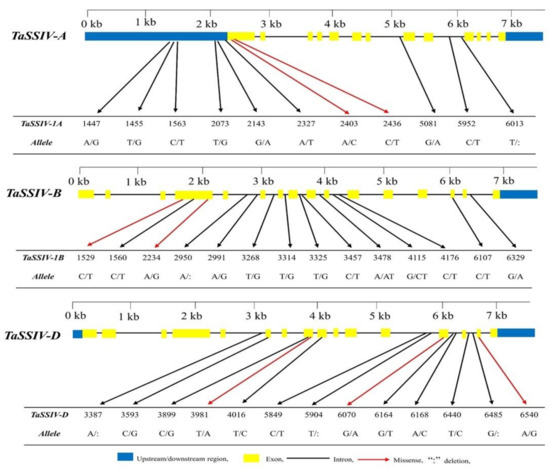