Alternative splicing (AS) is a post-transcriptional regulatory process that enhances transcriptome diversity, thereby affecting plant growth, development, and stress responses. To identify the new transcripts and changes in the isoform-level AS landscape of rapeseed (Brassica napus) infected with the fungal pathogen Leptosphaeria maculans, we compared eight RNA-seq libraries prepared from mock-inoculated and inoculated B. napus cotyledons and stems. The AS events that occurred in stems were almost the same as those in cotyledons, with intron retention representing the most common AS pattern. We identified 1892 differentially spliced genes between inoculated and uninoculated plants. We performed a weighted gene co-expression network analysis (WGCNA) to identify eight co-expression modules and their Hub genes, which are the genes most connected with other genes within each module. There are nine Hub genes, encoding nine transcription factors, which represent key regulators of each module, including members of the NAC, WRKY, TRAF, AP2/ERF-ERF, C2H2, C2C2-GATA, HMG, bHLH, and C2C2-CO-like families. Finally, 52 and 117 alternatively spliced genes in cotyledons and stems were also differentially expressed between mock-infected and infected materials, such as HMG and C2C2-Dof; which have dual regulatory mechanisms in response to L. maculans. The splicing of the candidate genes identified in this study could be exploited to improve resistance to L. maculans. View Full-Text
Keywords: alternative splicing; RNA-seq; WGCNA; plant defense; transcription factors alternative splicing; RNA-seq; WGCNA; plant defense; transcription factors
►▼ Show Figures 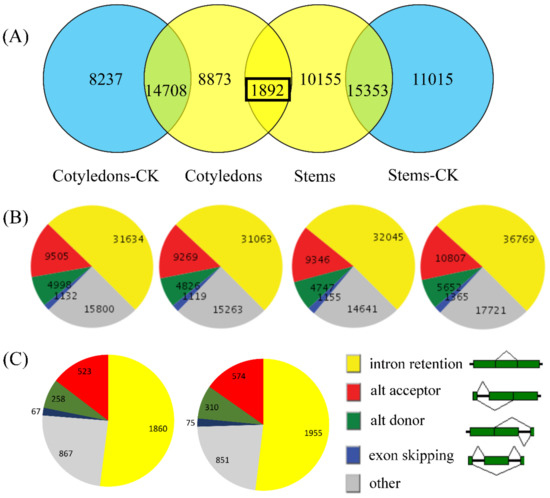