Promotion of the cell cycle is a major oncogenic mechanism of the oncogene c-MYC (MYC). MYC promotes the cell cycle by not only activating or inducing cyclins and CDKs but also through the downregulation or the impairment of the activity of a set of proteins that act as cell-cycle brakes. This review is focused on the role of MYC as a cell-cycle brake releaser i.e., how MYC stimulates the cell cycle mainly through the functional inactivation of cell cycle inhibitors. MYC antagonizes the activities and/or the expression levels of p15, ARF, p21, and p27. The mechanism involved differs for each protein. p15 (encoded by CDKN2B) and p21 (CDKN1A) are repressed by MYC at the transcriptional level. In contrast, MYC activates ARF, which contributes to the apoptosis induced by high MYC levels. At least in some cells types, MYC inhibits the transcription of the p27 gene (CDKN1B) but also enhances p27’s degradation through the upregulation of components of ubiquitin ligases complexes. The effect of MYC on cell-cycle brakes also opens the possibility of antitumoral therapies based on synthetic lethal interactions involving MYC and CDKs, for which a series of inhibitors are being developed and tested in clinical trials. View Full-Text
Keywords: MYC; cell cycle; CDK inhibitors; p21; p27; p15; ARF MYC; cell cycle; CDK inhibitors; p21; p27; p15; ARF
►▼ Show Figures 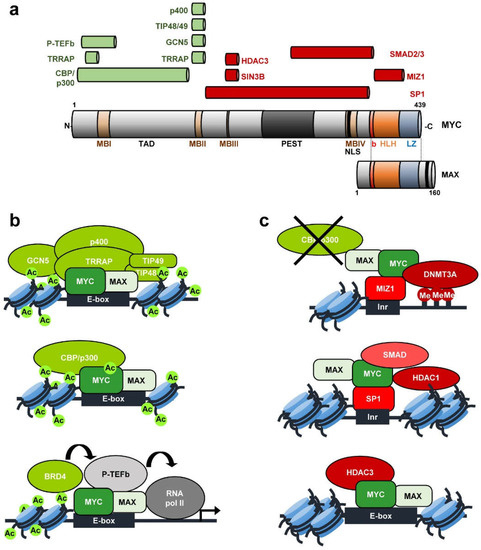