For each sample, total RNA was extracted and sent to Shanghai Biotechnology Corporation (Shanghai, China) for library construction. The RNA Sequencing (RNA-Seq) library of each sample was prepared by the [email protected] UltraTM II DNA Library Prep Kit (Illumina). And the library was sequenced paired-end reads (2 × 150 bp) on Illumina HiSeq3000 platform.

The sequencing raw data was first filtered to remove low-quality reads by fastQC, and adapters were removed using Cutadapt. The clean reads were then mapped to the pig genome (Ensembl Sscrofa 11.1) by Bowtie2 with default parameters [17]. The unique mapping reads were further processed to remove duplications based on genomic coordinates. The reproducibility of de-duplication reads was analyzed by calculating the coefficients of two samples. Briefly, the genome is first divided into a number of 10 kb bins, then the reads of two samples (de-duplication unique mapping bam file) on each bin are taken as the coordinates of the x-axis and y-axis, respectively. Draw the reads on all bins in the form of a scatter plot and calculate the Pearson correlation coefficient. The closer reads number in a bin are to the samples, the more accumulation points are on the diagonal, the greater the correlation coefficient, indicating that the better repeatability of two samples [18].

HTSeq software was used to count the reads for RNA-Seq data, after pre-processing. Further data mining was subsequently conducted including: DEGs analysis by DESeq2 package with default parameters, gene ontology (GO) analysis by DAVID and clusterProfiler package [19], further analysis was performed using GOplot with the results from DAVID [20], which are all available R packages [21].

The ChIP-Seq peak calling was performed by MACS2 with a 3 kb extension of promoter regions. The parameters of regular mode were used for peak calling of H3K4me3 H3K27ac and RNA polymerase Ⅱ (RNAPII), which were ‘macs2 callpeak -t ChIP.bam -c Control.bam -f BAMPE -g 2.7e+9 -n name -B -q 0.05′. While broad mode was used as ‘macs2 callpeak -t ChIP.bam -c Control.bam -f BAMPE -g 2.7e+9 -n name --broad --broad-cutoff 0.05′ for peak calling of H3K27me3 [22]. The modifications of three histone marks (H3K4me3, H3K27ac, and H3K27me3) and RNAPII were normalized with input files as control using bamCompare of deepTools based on log2 fold change of the reads per kilobase million (RPKM) [23]. Principal component analysis (PCA) was used to compare the correlation of ChIP-Seq data with multiBigwigSummary and plotPCA of deepTools with normalized files using spearman model with default parameters, and the enrichment profiles were performed using computeMatrix, plotProfile and plotHeatmap of deepTools. The annotation of the modification regions of three histone modifications and RNAPII were illustrated by ChIPseeker ± 3 kb of the transcription start site (TSS) region [24].

All results were presented as mean ± standard error of mean (SEM). Unpaired Student’s t-test was used to show the statistical significance. p <0.05 indicated the significant difference.

3.1. The Morphology Characterization of PSCs

Primary PSCs were isolated from skeletal muscle of newborn piglets. The proliferation (PRO) and differentiation (DIF) cells (D1, D2, D3 and D4) were illustrated by cell morphology. PSCs proliferated and renewed in PRO medium, and the significant myotube fusion was observed at D2 and D4 (Figure 1A). Furthermore, the PRO and D2 cells were characterized by PAX7 immunofluorescent cell (IFC) staining, which indicated the attribution of satellite cells. The transcription factors of differentiation, MYOD1 and MYOG, were also checked by IFC staining for PRO and D2 cells (Figure 1B). The PSCs used in this study were purified by pre-plating procedures. Based on PAX7 staining, more than 93% of positive PRO cells were positive, few however found in D2 cells (Figure S1A). The PSCs possessed highly myogenic differentiation potentials, and specific differential markers—MYOG and MYOSIN—were only found in D2 cells that indicated myotube formation and myofibres establishment (Figure S1B).

The PRO and DIF (D2) cells were subject to gene transcriptional analysis using RNA-Seq, and comparative analysis of differentially expressed genes between the two profiles was performed. The results showed that there were 15,569 and 15,200 genes expressed in PRO and DIF, respectively (Figure S2A). Moreover, 917 genes were identified as DEGs, which composed of 406 and 511 down- and up- regulated genes, respectively. The t up-regulated DEGs included MYL2, TNNT1 and MYL9, indicating skeletal muscle properties, while the down-regulated DEGs such as CDCA5, were more involved in cycles related to cell proliferation (Figure 2A). The gene ontology (GO) analysis further demonstrated that down-regulated DEGs were significantly enriched in the kinetochore formation, cell cycles and spindle pole terms, which are related to cell proliferation. Meanwhile, the up-regulated DEGs were found related to Z disc structure, myofibril formation, and sarcomere terms, which are essential for physiological functions of skeletal muscle (Figure 2B). Furthermore, down tendentious dominated the GO terms in this study, only nine biological processes were demonstrated to be significantly upregulated by gene function analysis (Figure 2C). In order to elucidate the roles of DEGs in myogenesis, further analysis showed that 62 DEGs were linked to five top GOs related to myofibres functions. Interestingly, the Z disc and steroid biosynthesis terms only linked with up-regulated DEGs, such as MYH7 and SC5D, regulating myofibres formation, while microtubule movement and kinetochore terms only connected with down-regulated DEGs, which participated in cell cycle modulation. Genes related to the FoxO signaling term, however, are involved in the whole myogenesis process of PSCs (Figure 2D). TGFB3 was upregulated, while CCNB1 and CCNB3 were downregulated in promoting myogenic differentiation, which were differentially expressed during PSC differentiation, as shown by quantitative PCR (qPCR) (Figure S2D).

3.3. Epigenome Alteration in the Differentiation of PSCs

To gain epigenomic insights into the mechanisms underlying the differentiation of PSCs, the chromatin stats alteration was surveyed by performing ChIP-Seq analysis of H3K4me3, H3K27ac, H3K27me3, and RNAPII (Figure 3A). The active promoter regions were mainly marked by H3K4me3, H3K27ac, and RNAPII and the distal repressed regions, however, were massively occupied by the H3K27me3 modifications, allowing us to interrogate the distributions of the epigenetic observations during cell differentiation. Principal component analysis (PCA) compared three histone modifications and RNAPII ChIP-Seq data of PRO and DIF cells, which were split into four parts explicating by function of the histone modification and cell phases. Active markers, H3K4me3, H3K27ac, and RNAPII, were separated from H3K27me3 modification. The cell phases were aggregated into PRO and DIF cell parts distinct from each other, suggesting the dynamic change of histone modifications of DIF from PRO cells (Figure 3B). Furthermore, the correlation was positive in PRO active and DIF active parts, between 0.28–0.45 using spearman model (Figure S3A). Moreover, based on peak calling the genome wide modifications globally decreased during the differentiation of PSCs, especially H3K27me3, which showed remarkable depletion by 50% from 22,060 to 11,573 compared to PRO cells (Figure 3C). In order to investigate the relationship between transcriptional and epigenomic modifications, the integrated analysis showed that gene transcription was highly linked with RNAPII activation, H3K4me3, and H3K27ac modification. Interestingly, there were large numbers of proximal regions of genebody such as transcription end site (TES), which were also activated as indicated by RNAPII binding, but no gene transcription was accompanied by H3K4me3 modifications. The H3K27me3 modification, however, was only associated with chromatin repression states, so that shutting down gene transcription in those regions (Figure 3D). The region, chr15: 81,888,000–82,000,000 for instance, showed large fractions of H3K4me3, H3K27ac, and RNAPII peaks, which were enriched at the TSS of activated genes, and H3K27me3 peaks were captured at genebodies of silenced genes (Figure S3B).

3.4. The Regulation Roles of Epigenetic Modification

3.5. The Roles of H3K27me3 During Cell Differentiation

To determine the specific roles of H3K27me3 histone modification during PSC differentiation, genome-wide screening was performed. Distinct reductions were found especially in intergenic, intronic, and promoter regions, accompanied by a significant decline in histone-modified genes (Figure 5A). Among the 917 identified DEGs, 179 were labeled with H3K27me3 histone modification (Table S3), of which, 81 had H3K27me3 modifications only during the proliferation phase (Figure 5B). Various depletion of H3K27me3 was found at the TSS regions of 179 H3K27me3 marked genes, which upregulated 139 genes (Figure 5C). Moreover, the upregulated histone-modified DEGs were involved in skeletal muscle tissue development and negative regulation of cell proliferation terms, indicating the specific roles of H3K27me3 modification for gene activation during PSC differentiation (Figure S5B). It was observed that the myogenic transcription factors and cell cycle related genes, such as MYOG and CDKN2B, were blocked with H3K27me3, of which the transcriptional activity was low at the proliferation phase (Figure 5D). Through H3K27me3 depletion, PSCs were promoted from the exiting cell cycle to initial cell differentiation with the up-regulation of MYOG together with cofactors, MEF2C, which would be released from repressive marks to activate downstream myogenic genes (Figure 5E).

We are also grateful to T.J. Tabasco, the female star of Duroc pig from Swine Genome Sequencing Consortium (SGSC), because a very small piece of her ear skin ignited the pig genome sequencing project in 2002. Now the latest version her genome (Sus scrofa 11.1) is widely used to serve all aspects of life especially in human health and disease research. 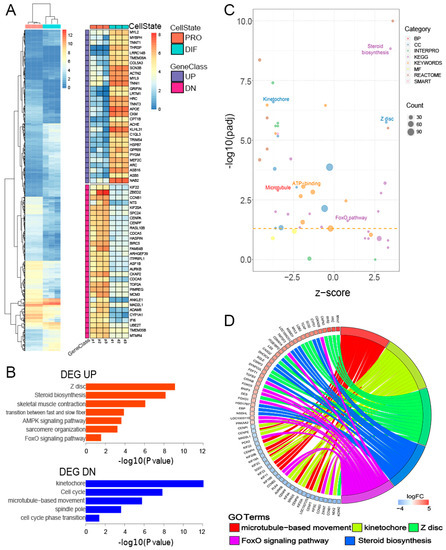 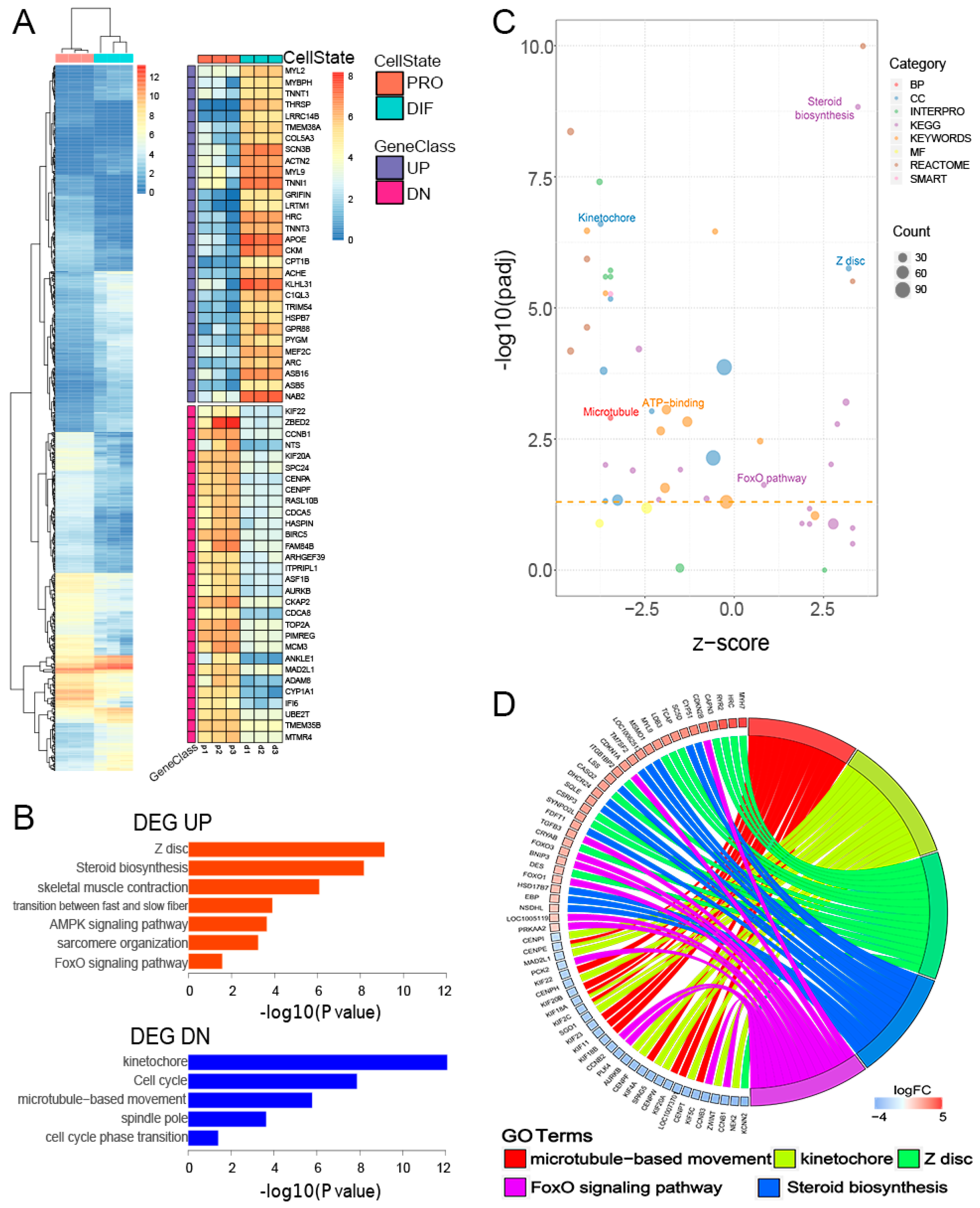 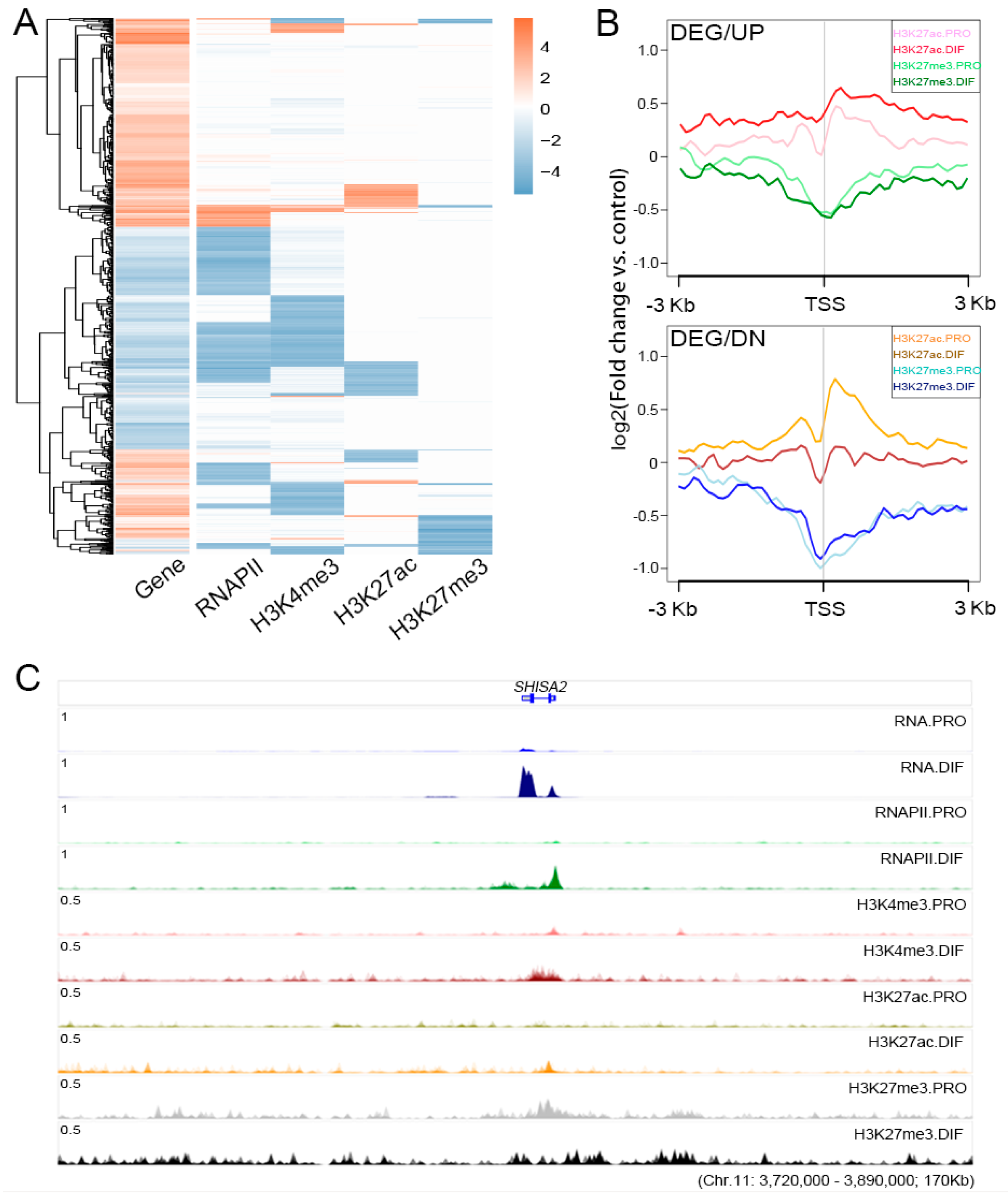 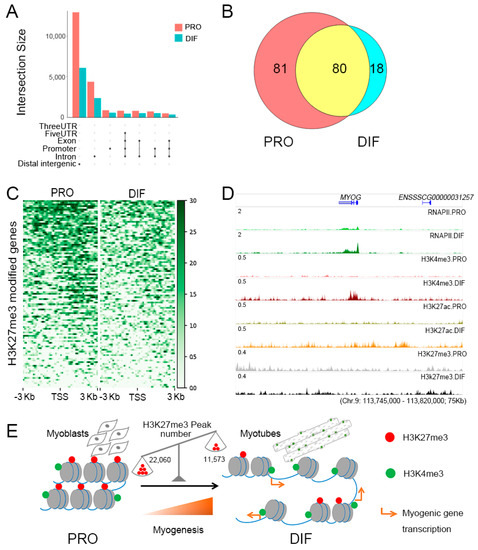