Protein tyrosine phosphatases (PTPs) fulfil multiple key regulatory functions. Within the group of PTPs, the atypical lipid phosphatases (ALPs) are known for their role as virulence factors associated with human pathogens. Another group of PTPs, which is capable of using inositol-hexakisphosphate (InsP6) as substrate, are known as phytases. Phytases play major roles in the environmental phosphorus cycle, biotechnology, and pathogenesis. So far, all functionally characterized PTPs, including ALPs and PTP-phytases, have been derived exclusively from isolated microorganisms. In this study, screening of a soil-derived metagenomic library resulted in identification of a gene (pho16B), encoding a PTP, which shares structural characteristics with the ALPs. In addition, the characterization of the gene product (Pho16B) revealed the capability of the protein to use InsP6 as substrate, and the potential of soil as a source of phytases with so far unknown characteristics. Thus, Pho16B represents the first functional environmentally derived PTP-phytase. The enzyme has a molecular mass of 38 kDa. The enzyme is promiscuous, showing highest activity and affinity toward naphthyl phosphate (Km 0.966 mM). Pho16B contains the HCXXGKDR[TA]G submotif of PTP-ALPs, and it is structurally related to PtpB of Mycobacterium tuberculosis. This study demonstrates the presence and functionality of an environmental gene codifying a PTP-phytase homologous to enzymes closely associated to bacterial pathogenicity. View Full-Text
Keywords: metagenomics; phosphatases; phytases; promiscuous enzymes; metagenomic library metagenomics; phosphatases; phytases; promiscuous enzymes; metagenomic library
►▼ Show Figures 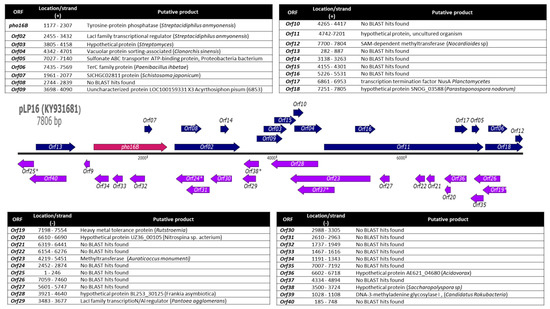