Altered in Vitro Metabolomic Response of the Human Microbiota to Sweeteners

The endometrium is a challenging site for metagenomic analysis due to difficulties in obtaining uncontaminated samples and the limited abundance of the bacterial population. Indeed, solid correlations between endometrial physio-pathologic conditions and bacteria compositions have not yet been firmly established. Nevertheless, the study of the endometrial microbiota is of great interest due to the close correlations between microbiota profiles, women’s health, and successful pregnancies. In this study, we decided to tackle the study of the endometrial microbiota through analysis of bacterial population in women subjected to elective caesarean delivery. As a pilot study, a cohort of 19 Caucasian women at full term of normal pregnancy and with a prospection of elective caesarean delivery was enrolled for endometrium sampling at the time of caesarean section. Sampling was carried out by endometrial biopsy soon after the delivery of the newborn and the discharge of the placenta and fetal membranes from the uterus. Bacterial composition was established by a deep metabarcoding next generation sequencing (NGS) procedure addressing the V5–V6 hypervariable region of the 16S rRNA gene. Amplicon sequences were analysed by bioinformatic procedures for denoising and taxonomic classification. The RDP database was used as 16S rRNA reference collection. Metabarcoding analysis showed the presence of a common bacterial composition, including six genera classifiable within the human microbiota (Cutibacterium, Escherichia, Staphylococcus, Acinetobacter, Streptococcus, Corynebacterium), that could be part of the core endometrial microbiota under the specific conditions examined. These results can provide useful information for future studies on the correlations between bacteria and successful pregnancies. View Full-Text
Keywords: endometrium; microbiota; metabarcoding; metagenomics endometrium; microbiota; metabarcoding; metagenomics
►▼ Show Figures 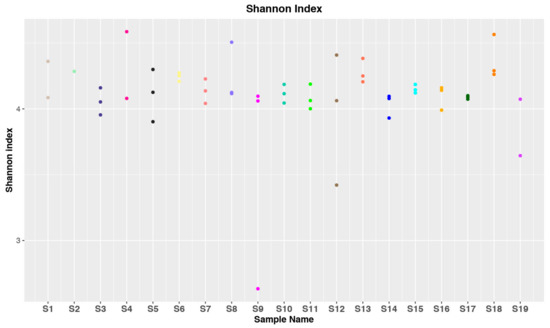