The BRCA1 and BRCA2 genes were discovered in the early 1990s [1,2]. In Sweden, oncogenetic clinics were established at university hospitals in the six national healthcare regions (North, Uppsala-Örebro, Stockholm, West, Southeast, and South) as BRCA screening was implemented for women with hereditary breast and ovarian cancer. Subsequently, each oncogenetic clinic was comprised of a team of oncologists, clinical geneticists, clinical laboratory geneticists and oncology nurses that could provide genetic counseling and screening for patients and families with hereditary breast and ovarian cancer. The oncogenetic clinic at Sahlgrenska University Hospital in Gothenburg, Sweden was established in 1995 and currently serves Western Sweden with a population of 1.9 million inhabitants. Intriguingly, a novel recurrent founder variant in BRCA1 with origins in Western Sweden was discovered during the first years of BRCA screening at the Clinical Genetics laboratory [3,4]. During the first years of BRCA-testing, about 77% of women positive for any disease-causing variant in Western Sweden carried this variant [4]. A regional follow-up register was initiated for women with BRCA variants at the oncogenetic clinic to ensure that these women were given access to relevant clinical surveillance programs, and to be able to evaluate the long-term effects of measures, e.g. risk reducing surgery, performed within the cohort. Referral criteria for the assessment of hereditary breast and ovarian cancer has followed previous and current national healthcare programs (https://www.cancercentrum.se), and are in general similar to international guidelines (https://www.nccn.org).
In a prospective cohort study with data from three international consortia, the cumulative risk for breast and ovarian cancer at 80 years of age for women with BRCA variants were estimated. The risks for BRCA1-carriers were 72% (95% CI, 65–79%) and 44% (95% CI, 36–53%), and for BRCA2-carriers 69% (95% CI, 61–77%) and 17% (95% CI, 11–25%), respectively [5]. Risk reducing mastectomy (RRM) and risk reducing salpingo-oophorectomy (RRSO) substantially reduced these risks. A systematic review of risk reducing surgery in women with BRCA showed a risk reduction of 90–100% of breast cancer after RRM and 72–88% for ovarian cancer [6]. One study showed an annual risk of peritoneal cancer after RRSO of 0.20% for women with BRCA1 and 0.10% for women with BRCA2, and in another study there was a 20-year cumulative risk of peritoneal cancer of 3.5% [7,8].
Further, RRSO substantially reduced the increased mortality, both breast cancer–specific and ovarian cancer–specific mortality and all-cause mortality [6,8,9]. To our knowledge, there are however no reports in the literature showing cancer incidence and mortality among women with BRCA variants after risk reducing surgery in a defined geographic region in comparison with the general female population in the same region.
National guidelines regarding hereditary breast and ovarian cancer recommends annual diagnostic imaging with breast magnetic resonance imaging (MRI) and breast ultrasound from ages 25 to 55 and mammography from ages 25 to 74 years. RRM has routinely been offered as a choice for those women who wanted a higher degree of risk reduction instead of surveillance. Regarding the ovaries, annual gynecological ultrasound was offered from 30 years of age. But more importantly, RRSO was recommended from 35 years of age for women with BRCA1 variants and from 40 years of age for women with BRCA2 variants [8,10]. During the surveillance period of this study the standard surgical procedure for RRM was a complete removal of breast tissue, initially including removal of the nipple but later changing to nipple sparing technique. The standard surgical procedure for RRSO has been baging and removal of the ovaries and fallopian tubes with laparoscopic techniques.
The aim of the present study was to assess the impact of risk reducing surgery on cancer incidence and mortality during a 20-year period (1995–2016) in a geographically defined population-based cohort of women in Western Sweden with BRCA variants. We evaluated cancer incidence and mortality among cancer-free women who underwent RRM and RRSO in comparison with baseline risks without risk reducing surgery and in comparison with the general female population.

Fourteen of the 239 women were diagnosed with ovarian cancer, or peritoneal cancer of ovarian origin. Seven of the 14 cancers were diagnosed during surveillance, 4/14 cancers were findings from the final pathology report from RRSO, and 3/14 cancers were diagnosed after the women had RRSO (Table 1). In addition to these 3 cases, there were 3 other cases of peritoneal cancer with unknown origin. These 3 other cases were not included in the analyses. The median age at diagnosis was 46.7 years (range, 39.1–51.5) and the median age at RRSO was 43.4 years (range, 28.2–79.7). All 14 women with ovarian cancer had BRCA1 variants. Seven of the 14 ovarian cancers were observed during surveillance, while the expected number was 0.06, with a SIR of 124.57 (95% CI, 59.39–261.30; Table 2). The youngest woman was diagnosed in the 35–39 age interval. Among the 136 women who had undergone a RRSO, three cancers were observed during follow-up after the RRSO, while the expected number was 0.22, resulting in a SIR of 13.47 (95% CI, 4.34–41.76). All women were diagnosed at the 40–49 age interval.

This population-based follow-up study was restricted to a defined geographic region, Western Sweden, with a cohort of women with BRCA variants, primarily registered at the time of genetic testing and thereafter prospectively followed regarding cancer incidence, risk reducing surgery and death between 1995–2016. In concordance with previous studies, we observed a reduction in breast and ovarian cancer incidence after RRM and RRSO as well as mortality [6,8,9]. However, the overall mortality rates for women with BRCA variants were still significantly increased compared to age matched-women in the general population, even after risk reducing surgery, SMR 4.32 (95% CI, 1.62–11.5). As far as we know, a persistent increase in SMR even after risk reducing surgery has not been previously shown in a study with a population-based cohort from a geographically defined region. These findings emphasize the need for further research to identify additional complementary measures than risk reducing surgery for high-risk women with BRCA variants.
For example, a more precise and individualized risk evaluation combining genetic screening for polygenic risk score in combination with hormonal factors and family pedigree could influence the woman to take preventive measures; engaging in surveillance programs or having risk reducing surgery, in time [14]. Further, ovarian cancer may arise in the fallopian tubes [15] which raises the question if sequential removal of tubes and ovaries would decrease their risk of ovarian cancer. PARP-inhibition and antihormonal drugs may with the right timing help in preventing cancer incidence and mortality [16]. RRSO for premenopausal women results in an immediate onset of menopause, which can bring the physical and emotional symptoms of natural menopause, and there is also an elevated risk of osteoporosis and probably also cardiovascular disease [17]. Hormone replacement therapy can be offered to women after RRSO to partly counteract the symptoms. Still, the negative aspects of early-induced menopause, including the impact on quality of life, are not fully known [18] and further preventive studies among these patients is warranted. Furthermore, early detection of cancer as well as early detection of a relapse of treated cancer through biomarkers such as circulating tumor cells, cell free tumor DNA and micro-RNA in blood may improve the possibilities for earlier intervention and treatment [19,20].
In our cohort, we observed two cases of breast cancer among 80 women who had a bilateral RRM. Furthermore, we observed three cases of peritoneal cancers of ovarian origin after RRSO among 136 women. This is in line with studies showing no or small remaining risks for cancer [6,7] after risk reducing surgery. Patients as young as 30–34 and 35–39 years of age at the time of diagnosis were identified with breast and ovarian cancer, respectively. Current clinical guidelines recommend starting surveillance of the breasts at age 25 and for the ovaries at age 30, which was in concordance with the findings in this study. There is no age recommendation for RRM, but a firm recommendation to consider RRSO from 35 years of age for BRCA1 and 40 years of age for BRCA2. These recommendations were thus adequate in relation to the ages of cancer diagnoses in our cohort.
In this study cohort of 253 women, 213 had BRCA1 variants and only 40 had BRCA2 variants, which affects the generalizability as BRCA1 is associated with a higher risk of both breast and ovarian cancer. Further, there is in the literature evidence for variant genotype–phenotype correlations in BRCA genes [21]. Four out of 10 women with BRCA1 variants carried the founder variant c.3171ins5 with an origin in Western Sweden, but if there is a correlation between this very variant and the breast and ovarian cancer ratios, is not known. BRCA variants may be associated with other cancers such as pancreas and colon cancer, in particular BRCA2 variants are associated to a relatively low increase in risk of pancreas cancer [22]. Those two cancer diagnoses were absent in our analytical cohort.
All women in the region of Western Sweden with a BRCA variant were asked to participate in a prospective follow-up register study. There were only a few lacking consents and the genetic counselors did not perceive the lacking consents to be related to whether the patient had cancer or risk reducing surgery. The high degree of accepting registration and surveillance in our cohort may depend on the fact that healthcare in Sweden is mainly financed by taxes, access to healthcare is subsidized or free for the patient, and the healthcare region is responsible for funding and providing healthcare services, including this type of surveillance program, risk reducing surgery and cancer treatment.
A strength of this study was the prospectively-followed primarily registered cohort of 489 women with BRCA variants in a defined geographic region during the period 1995–2016. Follow up was complete and the medical exams during surveillance as well as risk reducing surgery were well described in the register. Limitations of the study was the limited number of person years of follow-up and limited time of follow-up due to the majority of the women entering the study during the latter part of the inclusion period, at which time genetic testing gradually became more common. This resulted in wide confidence intervals for the estimates. 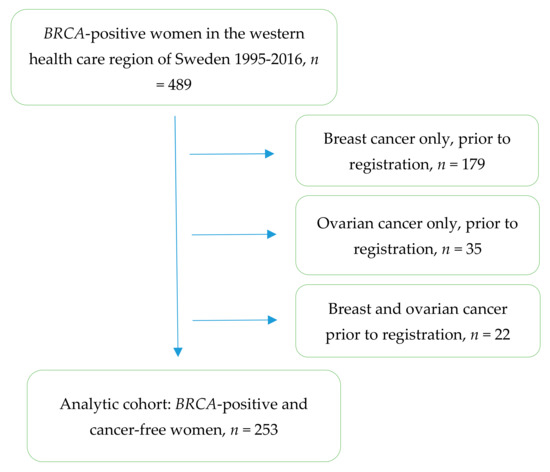 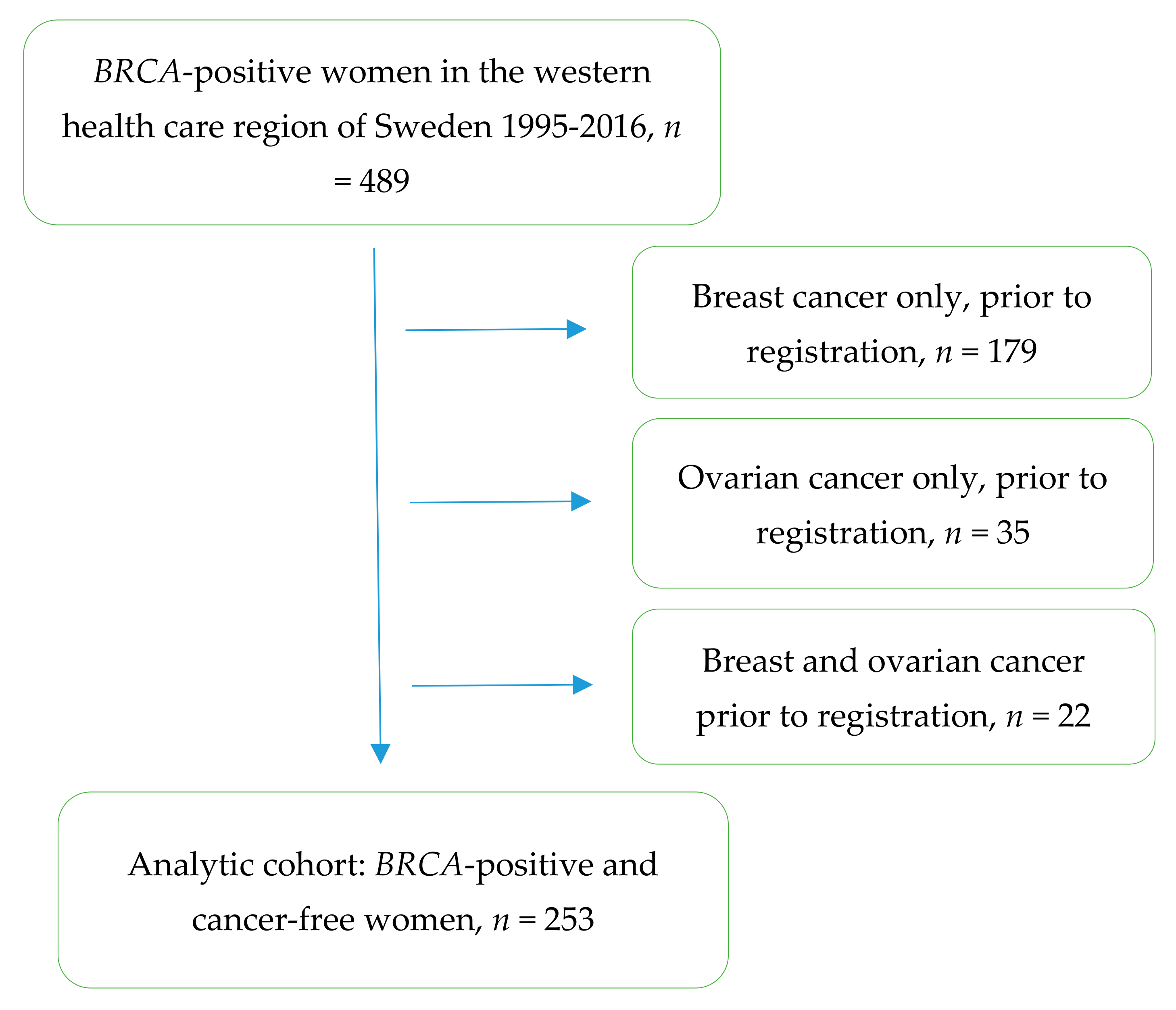