Population Genomics of Bettongia lesueur: Admixing Increases Genetic Diversity with no Evidence of Outbreeding Depression
Next Article in Special Issue

Pseudomonas spp. are widely distributed in various environments around the world. They are also common in the Antarctic regions. To date, almost 200 plasmids of Pseudomonas spp. have been sequenced, but only 12 of them were isolated from psychrotolerant strains. In this study, 15 novel plasmids of cold-active Pseudomonas spp. originating from the King George Island (Antarctica) were characterized using a combined, structural and functional approach, including thorough genomic analyses, functional analyses of selected genetic modules, and identification of active transposable elements localized within the plasmids and comparative genomics. The analyses performed in this study increased the understanding of the horizontal transfer of plasmids found within Pseudomonas populations inhabiting Antarctic soils. It was shown that the majority of the studied plasmids are narrow-host-range replicons, whose transfer across taxonomic boundaries may be limited. Moreover, structural and functional analyses enabled identification and characterization of various accessory genetic modules, including genes encoding major pilin protein (PilA), that enhance biofilm formation, as well as active transposable elements. Furthermore, comparative genomic analyses revealed that the studied plasmids of Antarctic Pseudomonas spp. are unique, as they are highly dissimilar to the other known plasmids of Pseudomonas spp. View Full-Text
Keywords: Antarctica; biofilm; horizontal gene transfer; plasmid; Pseudomonas; transposable element Antarctica; biofilm; horizontal gene transfer; plasmid; Pseudomonas; transposable element
►▼ Show Figures 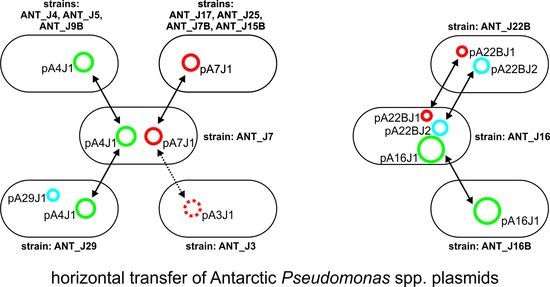