DNA methylation, catalyzed by DNA methyltransferases (DNMTs), is an epigenetic mark that needs to be faithfully replicated during mitosis in order to maintain cell phenotype during successive cell divisions. This epigenetic mark is located on the 5′-carbon of the cytosine mainly within cytosine–phosphate–guanine (CpG) dinucleotides. DNA methylation is asymmetrically positioned on both DNA strands, temporarily generating a hemi-methylated state after DNA replication. Hemi-methylation is a particular status of DNA that is recognized by ubiquitin-like containing plant homeodomain (PHD) and really interesting new gene (RING) finger domains 1 (UHRF1) through its SET- (Su(var)3-9, Enhancer-of-zeste and Trithorax) and RING-associated (SRA) domain. This interaction is considered to be involved in the recruitment of DNMT1 to chromatin in order to methylate the adequate cytosine on the newly synthetized DNA strand. The UHRF1/DNMT1 tandem plays a pivotal role in the inheritance of DNA methylation patterns, but the fine-tuning mechanism remains a mystery. Indeed, because DNMT1 experiences difficulties in finding the cytosine to be methylated, it requires the help of a guide, i.e., of UHRF1, which exhibits higher affinity for hemi-methylated DNA vs. non-methylated DNA. Two models of the UHRF1/DNMT1 dialogue were suggested to explain how DNMT1 is recruited to chromatin: (i) an indirect communication via histone H3 ubiquitination, and (ii) a direct interaction of UHRF1 with DNMT1. In the present review, these two models are discussed, and we try to show that they are compatible with each other. View Full-Text
Keywords: cell identity; DNA methylation; DNMT1; epigenetics; gene expression; UHRF1 cell identity; DNA methylation; DNMT1; epigenetics; gene expression; UHRF1
►▼ Show Figures 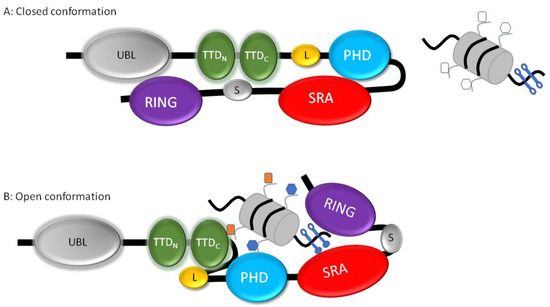