Ferroptosis is a new type of oxidative regulated cell death (RCD) driven by iron-dependent lipid peroxidation. As major sites of iron utilization and master regulators of oxidative metabolism, mitochondria are the main source of reactive oxygen species (ROS) and, thus, play a role in this type of RCD. Ferroptosis is, indeed, associated with severe damage in mitochondrial morphology, bioenergetics, and metabolism. Furthermore, dysregulation of mitochondrial metabolism is considered a biochemical feature of neurodegenerative diseases linked to ferroptosis. Whether mitochondrial dysfunction can, per se, initiate ferroptosis and whether mitochondrial function in ferroptosis is context-dependent are still under debate. Cancer cells accumulate high levels of iron and ROS to promote their metabolic activity and growth. Of note, cancer cell metabolic rewiring is often associated with acquired sensitivity to ferroptosis. This strongly suggests that ferroptosis may act as an adaptive response to metabolic imbalance and, thus, may constitute a new promising way to eradicate malignant cells. Here, we review the current literature on the role of mitochondria in ferroptosis, and we discuss opportunities to potentially use mitochondria-mediated ferroptosis as a new strategy for cancer therapy. View Full-Text
Keywords: mitochondria; ferroptosis; cancer; cell death; iron; ROS mitochondria; ferroptosis; cancer; cell death; iron; ROS
►▼ Show Figures 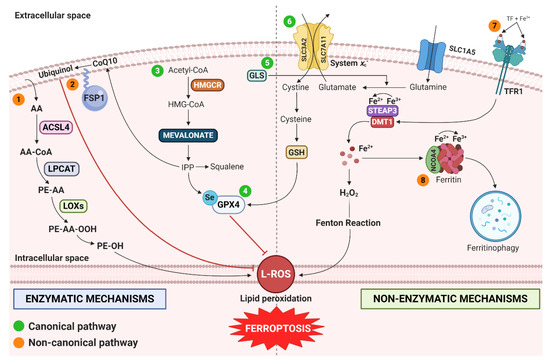