Podoplanin (PDPN), a small transmembrane mucin-like glycoprotein, is ectopically expressed. It is also known to be linked with several aspects of tumor malignancy in some types of human tumors, including invasion, metastasis, and cancer stemness. However, there are few reports on the expression of dog PDPN (dPDPN) in canine tumors, and the association between dPDPN and tumor malignancy has not been elucidated. We identified that 11 out of 18 types of canine tumors expressed dPDPN. Furthermore, 80% of canine malignant melanoma (MM), squamous cell carcinoma, and meningioma expressed dPDPN. Moreover, the expression density of dPDPN was positively associated with the expression of the Ki67 proliferation marker. The silencing of dPDPN by siRNAs resulted in the suppression of cell migration, invasion, stem cell-like characteristics, and cell viability in canine MM cell lines. The suppression of cell viability was caused by the induction of apoptosis and G2/M phase cell cycle arrest. Overall, this study demonstrates that dPDPN is expressed in various types of canine tumors and that dPDPN silencing suppresses cell viability through apoptosis and cell cycle arrest, thus providing a novel biological role for PDPN in tumor progression.
Keywords: podoplanin; cancer; Ki67; melanoma; squamous cell carcinoma; apoptosis; cell cycle podoplanin; cancer; Ki67; melanoma; squamous cell carcinoma; apoptosis; cell cycle

Podoplanin (PDPN), also known as PA2.26, gp38, T1α, and Aggrus, is a small transmembrane mucin-like glycoprotein [1,2,3]. PDPN is expressed in various types of normal cells such as renal podocytes, pulmonary type I alveolar cells, lymphatic endothelial cells (LECs), osteocytes, mesothelial cells, glia cells, some types of neurons, and fibroblasts [1,2,3]. PDPN has been reported to have various roles, which are dependent on cell type and the timing of its expression [2]. In the embryo, PDPN expression plays a crucial role in organogenesis by regulating epithelial–mesenchymal transition (EMT) [2]. Indeed, PDPN null mice die shortly after birth because of the malfunction of alveoli and heart hypoplasia [2,4,5]. In adult human epidermal keratinocytes and fibroblasts, PDPN promotes cell motility through the modification of actin cytoskeleton organization [6,7]. Meanwhile, in adult immune cells, PDPN regulates the immune system and the inflammatory microenvironment by regulating various types of cytokines [8,9].
Moreover, PDPN has been reported to be overexpressed in various types of human tumors, and it is reported that 100% of glioma [10], 100% of lymphangioma [11], 98% of germ cell tumor [12], 94% of angiosarcoma [13], 86% of malignant mesothelioma [14], 80% of squamous cell carcinoma (SCC) [15,16], 80% of osteosarcoma [17], 78% of hemangioendothelioma [18], 36% of pleomorphic carcinoma of the lung overexpressed PDPN [19]. Some reports demonstrated that PDPN is associated with tumor malignancy through the promotion of tumor cell invasion and distant metastasis with or without platelet aggregation [1,2]. In human SCC, PDPN promotes tumor cell migration and invasion by cytoskeleton remodeling via Rho signaling [20]. In human SCC and malignant pleural mesothelioma cell lines, PDPN induces EMT and promotes tumor cell invasion and distant metastasis by binding with platelets [21]. Furthermore, anti-PDPN antibodies, which neutralize PDPN–platelet interaction, suppress the tumor growth and pulmonary metastasis of human melanoma and mesothelioma in a mouse model [22,23]. Therefore, it is considered that PDPN enhances tumor malignancy and thus could be used as a therapeutic target for some types of tumors.
In a similar manner to humans, PDPN has been reported to be expressed in renal podocytes, alveolar epithelial cells and LECs in dogs [24,25,26]. However, there are few reports on the expression of dog PDPN (dPDPN) in canine tumors. Spontaneously occurring canine cancer is the most common cause of death in dogs, as well as humans. Approximately one in three dogs will be diagnosed with cancer during their lifetime, and cancer currently accounts for about half of the deaths of all dogs older than 10 years [27,28,29]. Since dogs live in close proximity to humans, they are influenced by similar environmental factors which can lead to cancer development [27,28,29]. Furthermore, many features of spontaneously occurring canine cancers are similar to those of human cancers in terms of histological morphology, biological behavior, molecular mechanisms and response to conventional therapy [27,28,29]. Although we have reported the expression of dPDPN in both normal tissues and tumor cells, including canine SCC [25,30], no research has provided a comprehensive profile of dPDPN expression in different types of canine tumors and the role of dPDPN in canine tumors remains to be elucidated. The aim of this study was to investigate the expression of dPDPN in various types of canine tumors and to investigate its role in tumor progression.

A total of 159 paraffin-embedded tumor tissues were evaluated. Tumor tissues surgically removed from dogs between 2011 and 2017 at the Veterinary Medical Center, University of Tokyo, were included in this study. Permission for resected tissue collection and usage for this study was obtained from the dogs’ owners. Tissue samples were diagnosed by veterinary pathologists certified by the Japanese College of Veterinary Pathologists at the Department of Veterinary Pathology at the University of Tokyo.

2.2. Immunohistochemistry of dPDPN and Ki67

2.3. Evaluation of dPDPN and Ki67 Expression in Tumor Tissues

Target gene-specific and control small-interfering RNA (siRNA) were purchased from Sigma-Aldrich Corp. Target sequences for dPDPN were as follows; siRNA#1: 5’-GAGAGUGUAACAGACUUAC-3’, siRNA#2: 5′-AGGAUGGGCCGACUCAAGA-3′. Mi and CMM12 were seeded at a density of 7.9 × 102 cells/cm2 and 2.6 × 103 cells/cm2, respectively. After incubation for 24 h, Mi and CMM12 were incubated with 20 nM or 50 nM siRNAs and 2 or 4 µg/mL LipofectamineTM RNAiMAX (Thermo Fisher Scientific, Inc.) in Opti-MEM (Thermo Fisher Scientific, Inc.) and each growth medium with 10% FBS, respectively. After incubation for 8 h, Mi medium was removed and fresh medium was added. As a negative siControl, MISSION® siRNA Universal Negative Control (Mission SIC 001, Sigma-Aldrich Corp.) was used. siRNA-transfected cells were incubated at 37 °C in 5% CO2 until the assay was carried out.

Culture inserts (24-well permeable support, 8.0 µm pore, Corning, Corning, NY, USA) were set on a 24-well companion plate (Corning). For the migration assay, uncoated inserts were used, and for the invasion assay, inserts were incubated with 200 µL Matrigel (200 µg/mL) (BD) for 3 h at 37 °C before using. After preparing culture inserts, a cell suspension containing 1.0 or 2.0 × 104 cells in 400 µL serum-free medium was added to each culture insert. Medium with 10% FBS was added to the lower chamber of the companion plate as a chemoattractant. Plates were then incubated for another 24 h at 37 °C in a humidified 5% CO2 atmosphere. Cells were fixed and stained with PBS containing 6% glutaraldehyde and 0.5% crystal violet and images of each culture insert were captured under magnification (×200). Three images per one culture insert were randomly captured, and all cells in each image were manually counted as migrated/invaded cells.

After a 48-h incubation for siRNA transfection, cells that were not stained with trypan blue (Sigma-Aldrich Corp.) were counted as live cells.

Mi and CMM12 cell lines were incubated with siRNAs for 48 h and 72 h, respectively. Subsequently, the cells were trypsinized and fixed with 100% ice-cold ethanol for 20 min on ice. After washing with PBS, cells were stained with 50 µg/mL propidium iodide (Sigma-Aldrich Corp.), 0.1 mg/mL RNase A (Roche Diagnostics, Basel, Switzerland) and 0.05% Triton-X 100 (Sigma-Aldrich Corp.) for 40 min at 37 °C. Stained cells were immediately analyzed by flow cytometry.

3.1. dPDPN Was Expressed In Canine Tumor Tissues and Cell Lines

To investigate the role of dPDPN in several aspects of canine MM malignancy, such as tumor cell migration, invasion, cancer stemness and cell proliferation, a dPDPN knockdown experiment was performed in canine MM cell lines (Mi and CMM12) using siRNAs. Treatment with dPDPN-specific siRNA#1 and #2 significantly inhibited dPDPN expression in both Mi and CMM12 cell lines, compared to the cell lines treated with control-scrambled siRNA (Figure 2A). Knockdown of dPDPN resulted in a significant reduction in the migration capacity of the Mi cell line. A slight reduction in the migration capacity of the CMM12 cell line was also observed, although it was not significant (Figure 2B). Knockdown of dPDPN expression also resulted in the significant inhibition of the invasion capacity of Mi cell line. We could not, however, evaluate the invasion capacity of the CMM12 cell line, because cells did not invade the Matrigel during the evaluated period of 24 h (Figure 2C).
To investigate the association between dPDPN and cancer stemness, a sphere-forming assay was performed. The number of spheres developed from a single cell of the Mi cell line was significantly reduced following dPDPN-specific siRNAs treatment. On the contrary, dPDPN knockdown in CMM12 cell line did not reduce the number of spheres (Figure 2D).
Finally, the association between dPDPN and cell viability was also investigated. Treatment with dPDPN-specific siRNAs significantly suppressed cell viability in both Mi and CMM12 cell lines after 48 h, with the number of living cells being reduced by 40% to 80% (Figure 2E).

To investigate the mechanism of inhibition of cell viability by dPDPN knockdown, the effect of dPDPN knockdown on the induction of apoptosis was evaluated. After 48 h of dPDPN-specific siRNAs treatment for both Mi and CMM12 cell lines, the percentage of Annexin V-positive tumor cells was significantly increased (Figure 3A,B). Next, we used Western blot to evaluate the expression of Cleaved Caspase 3 protein, an indicator for initiation of apoptosis, in siRNA-treated Mi cell line. We showed that Cleaved Caspase 3 protein expression was increased in the dPDPN-knocked-down Mi cell line (Figure 3C). These results demonstrated that dPDPN knockdown induced the apoptosis of tumor cells in canine MM cell lines.

We thank all the clinicians who treated dogs and the owners of dogs in this study.

The authors declare no conflicts of interest involving this article. 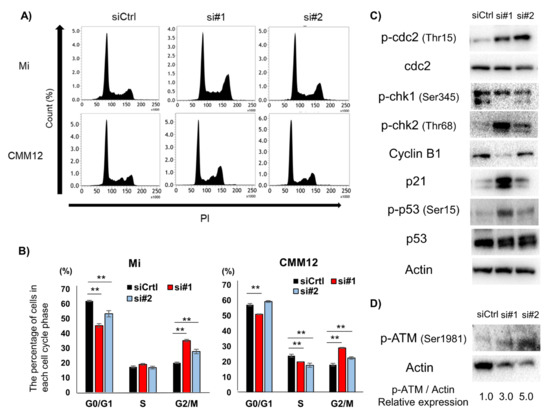