Phosphatidylinositol 3-kinase, catalytic subunit alpha (PIK3CA) is an oncogene often mutated in colorectal cancer (CRC). The contribution of PIK3CA mutations in acquired resistance to anti-epidermal growth factor receptor (EGFR) therapy is well documented, but their prognostic and predictive value remain unclear. Domain- and exon-specific mutations are implicated in either favorable or poor prognoses, but there is paucity in the number of mutations characterized outside of the mutational hotspots. Here, two novel non-hotspot mutants—Q661K in exon 13 and C901R in exon 19—were characterized alongside the canonical exon 9 E545K and exon 20 H1047R mutants in NIH3T3 and HCT116 cells. Q661K and E545K both map to the helical domain, whereas C901R and H1047R map to the kinase domain. Results showed variable effects of Q661K and C901R on morphology, cellular proliferation, apoptosis resistance, and cytoskeletal reorganization, with both not having any effect on cellular migration. In comparison, E545K markedly promoted proliferation, survival, cytoskeletal reorganization, migration, and spheroid formation, whereas H1047R only enhanced the first three. In silico docking suggested these mutations negatively affect binding of the p85 alpha regulatory subunit to PIK3CA, thereby relieving PIK3CA inhibition. Altogether, these findings support intra-domain and mutation-specific variability in oncogenic readouts, with implications in degree of aggressiveness. View Full-Text
Keywords: PIK3CA; colorectal cancer; EGFR pathway; tumor heterogeneity PIK3CA; colorectal cancer; EGFR pathway; tumor heterogeneity
►▼ Show Figures 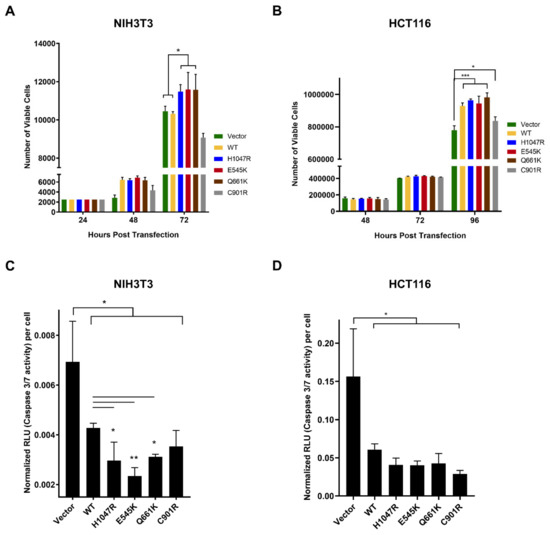