Dysregulation of microtubules and tubulin homeostasis has been linked to developmental disorders, neurodegenerative diseases, and cancer. In general, both microtubule-stabilizing and destabilizing agents have been powerful tools for studies of microtubule cytoskeleton and as clinical agents in oncology. However, many cancers develop resistance to these agents, limiting their utility. We sought to address this by developing a different kind of agent: tubulin-targeted small molecule degraders. Degraders (also known as proteolysis-targeting chimeras (PROTACs)) are compounds that recruit endogenous E3 ligases to a target of interest, resulting in the target’s degradation. We developed and examined several series of α- and β-tubulin degraders, based on microtubule-destabilizing agents. Our results indicate, that although previously reported covalent tubulin binders led to tubulin degradation, in our hands, cereblon-recruiting PROTACs were not efficient. In summary, while we consider tubulin degraders to be valuable tools for studying the biology of tubulin homeostasis, it remains to be seen whether the PROTAC strategy can be applied to this target of high clinical relevance. View Full-Text
Keywords: microtubule; tubulin; PROTAC microtubule; tubulin; PROTAC
►▼ Show Figures 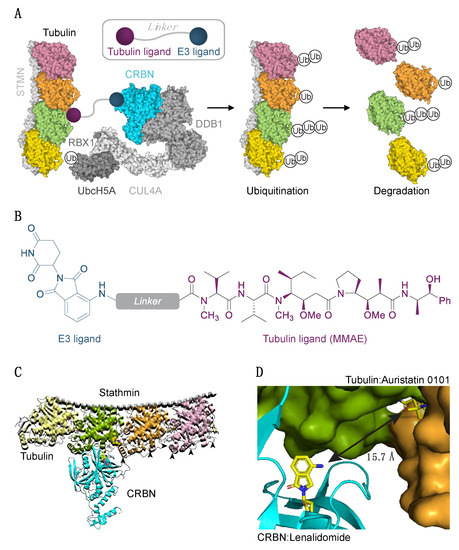