Decreased Placental FPR2 in Early Pregnancies That Later Developed Small-For-Gestation Age: A Potential Role of FPR2 in the Regulation of Epithelial-Mesenchymal Transition
Previous Article in Journal

scRNA-seq Profiling of Human Testes Reveals the Presence of the ACE2 Receptor, A Target for SARS-CoV-2 Infection in Spermatogonia, Leydig and Sertoli Cells

In December 2019, a novel coronavirus (SARS-CoV-2) was identified in COVID-19 patients in Wuhan, Hubei Province, China. SARS-CoV-2 shares both high sequence similarity and the use of the same cell entry receptor, angiotensin-converting enzyme 2 (ACE2), with severe acute respiratory syndrome coronavirus (SARS-CoV). Several studies have provided bioinformatic evidence of potential routes of SARS-CoV-2 infection in respiratory, cardiovascular, digestive and urinary systems. However, whether the reproductive system is a potential target of SARS-CoV-2 infection has not yet been determined. Here, we investigate the expression pattern of ACE2 in adult human testes at the level of single-cell transcriptomes. The results indicate that ACE2 is predominantly enriched in spermatogonia and Leydig and Sertoli cells. Gene Set Enrichment Analysis (GSEA) indicates that Gene Ontology (GO) categories associated with viral reproduction and transmission are highly enriched in ACE2-positive spermatogonia, while male gamete generation related terms are downregulated. Cell–cell junction and immunity-related GO terms are increased in ACE2-positive Leydig and Sertoli cells, but mitochondria and reproduction-related GO terms are decreased. These findings provide evidence that the human testis is a potential target of SARS-CoV-2 infection, which may have significant impact on our understanding of the pathophysiology of this rapidly spreading disease.
Keywords: SARS-CoV-2; infection; scRNA-seq; ACE2; spermatogonia SARS-CoV-2; infection; scRNA-seq; ACE2; spermatogonia

In December 2019, a novel coronavirus designated SARS-CoV-2 was identified in patients with pneumonia in Wuhan, Hubei Province of China. The new coronavirus disease has received an official name, coronavirus disease 2019 (COVID-19) from the World Health Organization. It can cause acute respiratory distress syndrome and infected patients have a relatively high risk of death [1,2,3]. It has been reported that SARS-CoV-2 shares 76% amino acid sequence identity with severe acute respiratory syndrome coronavirus (SARS-CoV), and is likely to use the same receptor, angiotensin-converting enzyme 2 (ACE2), for entry into target host cells [4,5,6]. Recent studies provide structural and functional evidence that SARS-CoV-2 entry into cells is recognized by full-length human ACE2 [7,8]. Another experimental study reveals that SARS-CoV-2 employs the SARS-CoV receptor ACE2 for host cell entry [5]. Collectively, structural and functional studies have demonstrated that SARS-CoV-2 uses the SARS-CoV receptor ACE2 for entry.
scRNA-seq analysis documents that ACE2 is specifically expressed in type II alveolar epithelial cells (AT2) in human lungs [6], suggesting that this virus targets ACE2-positive AT2 cells to induce pneumonia. Liver function damage has been reported in SARS-infected and Middle East respiratory syndrome coronavirus (MERS-CoV)-infected patients [9,10]. A recent epidemiologic study indicates that some patients infected with SARS-CoV-2 have signs of severe liver damage [1]. By analyzing healthy liver cells at single-cell resolution, investigators have determined that ACE2 is significantly enriched in cholangiocytes [11], suggesting that the virus might directly bind to ACE2-positive cholangiocytes to dysregulate liver function. Moreover, a recent study explored the composition and proportion of ACE2-expressing cells in the digestive system by scRNA-seq analysis, and its results showed that ACE2 is not only highly expressed in lung AT2 cells, the upper esophagus and stratified epithelial cells, but also in absorptive enterocytes in the ileum and colon [12], implying that the digestive system is a potential route of SARS-CoV-2 infection. In addition, cardiovascular and urinary systems have been reported as potential organ targets of SARS-CoV-2 infection [13].
A series of studies have provided the bioinformatics evidence of potential routes of SARS-CoV-2 infection in respiratory, cardiovascular, digestive and urinary systems. SARS-infected male patients show wide-spread germ cell destruction, few or no spermatozoon in the seminiferous tubules, and a thickened basement membrane in the testes [14]. However, whether the reproductive system is susceptible to SARS-CoV-2 infection has not yet been determined. In this study, we investigate the RNA expression profiles of ACE2 in adult human testes at single-cell resolution. Our study documents that ACE2 is predominantly enriched in spermatogonia and Leydig and Sertoli cells. ACE2-positive cells possess higher abundance of transcripts associated with viral reproduction and transmission, and lower abundance of transcripts related to male gametogenesis. Thus, the reported ACE2 expression in human testes suggests that SARS-CoV-2 could infect the male gonad and risk male reproductive dysfunction.

Raw gene expression matrices generated per sample using Cell Ranger (Version 3.1.0) were imported into R (Version 3.6.2) and converted into a Seurat object using the Seurat R package (Version 3.1.2). Cells which had either fewer than 300 expressed genes or over 15% UMIs derived from the mitochondrial genome were discarded. For the remaining cells, gene expression matrices were normalized to total cellular read count and to mitochondrial read count using the negative binomial regression method implemented in the Seurat SCTransform function. Cell-cycle scores were also calculated using the Seurat CellCycleScoring function since the cell cycle phase effect was observed. The gene expression matrices were then further normalized to cell cycle scores. The Seurat RunPCA functions were used to calculate the principal components (PCs). We further performed the batch effect correction using Harmony, because batch effects among the three human testis samples were observed. The RunUMAP function in its default setting was applied to visualize the first 35 Harmony-aligned coordinates. The FindClusters function with a resolution = 0.6 parameter was carried out in order to cluster cells into different groups. Canonical marker genes were applied to annotate cell clusters into known biological cell types.

To identify differential expression genes (DEG) between two groups, we used the Seurat FindMarkers function with the default parameter of the “MAST” method and cell IDs from each defined group (e.g., AT2 with ACE2 expression vs. AT2 without ACE2 expression) as inputs.

To assess the expression pattern of ACE2 in human testes, we first analyzed a published scRNA-seq dataset from three individual adult human testis samples [15]. From a total of 17,520 testicular cells, 16,632 cells passed standard quality control and were retained for subsequent analyses. On average, we detected 9398 UMIs and 2388 genes in each individual cell.
Uniform manifold approximation and projection (UMAP) and marker gene analyses were performed for cell type identification of the total 16,632 testicular cells. Based on the UMAP results, we identified nine major cell clusters, and none of the clusters solely derived from one individual, as shown in Figure 1A,B. Cluster identity was assigned based on expression patterns of known marker genes in human testes. We have identified five major germ cell types including spermatogonia, early spermatocytes, late spermatocytes, round spermatids and elongated spermatids that recapitulated the temporal order of spermatogenesis. We also identified somatic cell types including endothelial, Sertoli and Leydig cells as well as monocytes, as shown in Figure 1A,B.

Two known coronaviruses, SARS-CoV and MERS-CoV, are infection sources of respiratory disease in humans that caused public panic in past years [16]. In December 2019, a newly identified coronavirus (SARS-CoV-2) was discovered in patients that had similar respiratory symptoms with SARS and MERS. Until now, no effective drugs are clinically approved for these etiologic agents, but it appears that they share the same ACE2 receptor for entry into the host cells for reproduction and transmission [5,7,8]. Thus, the investigation of the composition and expression pattern of ACE2 may suggest potential routes of SARS-CoV-2 infection in humans. Recent studies have shown that respiratory, cardiovascular, digestive and urinary systems are affected by SARS-CoV-2 infection [12,13]. Based on our current study of the scRNA-seq data in adult human testes, we suggest that the testis is also potentially vulnerable to SARS-CoV-2 infection.
Mammalian spermatogenesis is a coordinate and dynamic cell differentiation process supported by the self-renewal and differentiation of spermatogonial stem cells (SSCs). It is stringently controlled in a special niche microenvironment in testicular seminiferous tubules. Sertoli cells are the only somatic cell type in the tubules and directly interact with spermatogenic cells to control spermatogenic cell differentiation through paracrine signaling [17]. The interstitial cells of Leydig are adjacent to the seminiferous tubules and produce testosterone in the presence of luteinizing hormones to support spermatogenic cell differentiation [18]. Functional abnormalities in male germ cells or these supporting somatic cells cause spermatogenic failure and male infertility.
SARS coronavirus has been known to damage multiple organs including human testes. SARS can cause orchitis in humans. SARS-infected patients show testis damage and defects in spermatogenesis [14]. All SARS testes display wide-spread germ cell destruction, few or no spermatozoon in the seminiferous tubules and leukocyte infiltration [14]. SARS-CoV-2 sharing the same receptor as SARS raises the possibility that the human testis is also a potential route of SARS-CoV-2 infection.
By analyzing the expression pattern of ACE2 in adult human testes at single-cell transcriptome resolution, we found that ACE2 is primarily expressed in spermatogonia and Leydig and Sertoli cells in the human testis. ACE2-positive spermatogonia express a higher number of genes associated with viral reproduction and transmission, and a lower number of genes related to spermatogenesis compared to ACE2-negative spermatogonia. ACE2-positive Leydig and Sertoli cells express higher genes involved in cell–cell junction and immunity, and lower genes associated with mitochondria and reproduction. These findings suggest that the testis is a high-risk organ vulnerable to SARS-CoV-2 infection that may result in spermatogenic failure.
In summary, our study provides bioinformatics evidence that the testis may be potentially vulnerable to SARS-CoV-2 infection. These investigations suggest that the reproductive functions should be followed and evaluated in recovered COVID-2019 male patients. Our findings may also have translational implications for the treatment of reproductive defects caused by SARS-CoV-2 infection.

We thank Brian Papas for preparing raw data. Also, we would like to thank Jurrien Dean for review and editing of the manuscript. 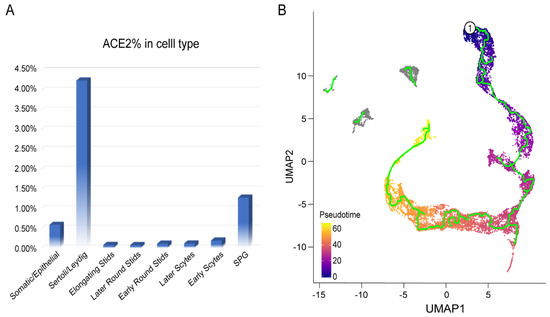 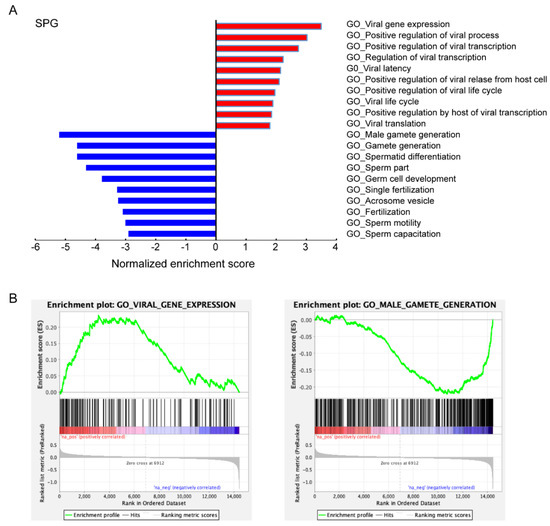