The major stress-inducible protein Hsp70 (HSPA1A) is overexpressed in the cytosol of many highly aggressive tumor cells including glioblastoma multiforme and presented on their plasma membrane. Depending on its intracellular or membrane localization, Hsp70 either promotes tumor growth or serves as a target for natural killer (NK) cells. The kinetics of the membrane Hsp70 (mHsp70) density on human glioma cells (U87) was studied after different irradiation doses to define the optimal therapeutic window for Hsp70-targeting NK cells. To maintain the cells in the exponential growth phase during a cultivation period of 7 days, different initial cell counts were seeded. Although cytosolic Hsp70 levels remained unchanged on days 4 and 7 after a sublethal irradiation with 2, 4 and 6 Gy, a dose of 2 Gy resulted in an upregulated mHsp70 density in U87 cells which peaked on day 4 and started to decline on day 7. Higher radiation doses (4 Gy, 6 Gy) resulted in an earlier and more rapid onset of the mHsp70 expression on days 2 and 1, respectively, followed by a decline on day 5. Membrane Hsp70 levels were higher on cells in G2/M than in G1; however, an irradiation-induced cell cycle arrest on days 4 and 7 was not associated with an increase in the mHsp70 density. Extracellular Hsp70 concentrations in the supernatant of irradiated cells were significantly higher than sham (0 Gy) irradiated cells on days 4 and 7, but not on day 1. Functionally, elevated mHsp70 densities were associated with a significantly better lysis by Hsp70-targeting NK cells. In summary, the kinetics of changes in the mHsp70 density upon irradiation on tumor cells is time- and dose-dependent. View Full-Text
Keywords: radiotherapy; glioblastoma; membrane Hsp70; dose- and time-kinetics; NK cell-based therapy radiotherapy; glioblastoma; membrane Hsp70; dose- and time-kinetics; NK cell-based therapy
►▼ Show Figures 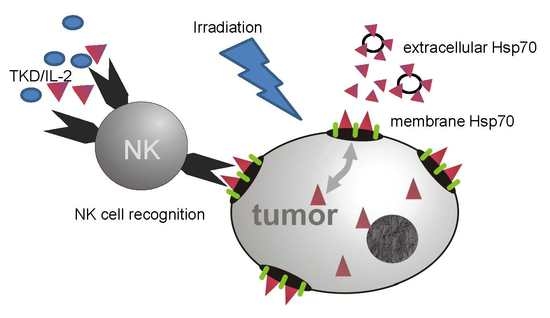