Adhesion to extracellular matrix proteins is an important first step in host invasion, employed by many bacterial pathogens. In mycobacteria, the secreted Ag85 complex proteins, involved in the synthesis of the cell envelope, are known to bind to fibronectin (Fn) through molecular forces that are currently unknown. In this study, single-molecule force spectroscopy is used to study the strength, kinetics and thermodynamics of the Ag85-Fn interaction, focusing on the multidrug-resistant Mycobacterium abscessus species. Single Ag85 proteins bind Fn with a strength of ~75 pN under moderate tensile loading, which compares well with the forces reported for other Fn-binding proteins. The binding specificity is demonstrated by using free Ag85 and Fn peptides with active binding sequences. The Ag85-Fn rupture force increases with mechanical stress (i.e., loading rate) according to the Friddle–Noy–de Yoreo theory. From this model, we extract thermodynamic parameters that are in good agreement with previous affinity determinations by surface plasmon resonance. Strong bonds (up to ~500 pN) are observed under high tensile loading, which may favor strong mycobacterial attachment in the lung where cells are exposed to high shear stress or during hematogenous spread which leads to a disseminated infection. Our results provide new insight into the pleiotropic functions of an important mycobacterial virulence factor that acts as a stress-sensitive adhesin. View Full-Text
Keywords: mycobacteria; antigen 85 complex; fibronectin; strong bonds; atomic force microscopy mycobacteria; antigen 85 complex; fibronectin; strong bonds; atomic force microscopy
►▼ Show Figures 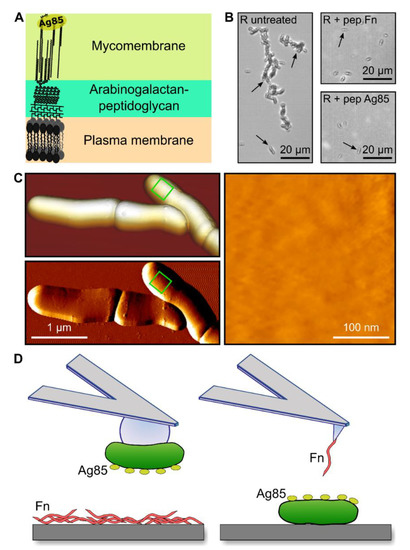