Adipocytes in Breast Cancer, the Thick and the Thin
Previous Article in Journal

Cancer Stem Cells: Devil or Savior—Looking behind the Scenes of Immunotherapy Failure

Although the introduction of immunotherapy has tremendously improved the prognosis of patients with metastatic cancers of different histological origins, some tumors fail to respond or develop resistance. Broadening the clinical efficacy of currently available immunotherapy strategies requires an improved understanding of the biological mechanisms underlying cancer immune escape. Globally, tumor cells evade immune attack using two main strategies: avoiding recognition by immune cells and instigating an immunosuppressive tumor microenvironment. Emerging data suggest that the clinical efficacy of chemotherapy or molecularly targeted therapy is related to the ability of these therapies to target cancer stem cells (CSCs). However, little is known about the role of CSCs in mediating tumor resistance to immunotherapy. Due to their immunomodulating features and plasticity, CSCs can be especially proficient at evading immune surveillance, thus potentially representing the most prominent malignant cell component implicated in primary or acquired resistance to immunotherapy. The identification of immunomodulatory properties of CSCs that include mechanisms that regulate their interactions with immune cells, such as bidirectional release of particular cytokines/chemokines, fusion of CSCs with fusogenic stromal cells, and cell-to-cell communication exerted by extracellular vesicles, may significantly improve the efficacy of current immunotherapy strategies. The purpose of this review is to discuss the current scientific evidence linking CSC biological, immunological, and epigenetic features to tumor resistance to immunotherapy.
Keywords: cancer stem cells; immunotherapy; tumor microenvironment; immune checkpoint blockade cancer stem cells; immunotherapy; tumor microenvironment; immune checkpoint blockade

Consistent with the concept of cancer immunoediting, many pieces of evidence have underlined the existence of bidirectional crosstalk between cancer cells and cells of innate or adaptive immunity. Specifically, cancer immunoediting, which can constrain or promote tumor development and progression depending on the balance between cancer and immune cells, is a multistep process consisting of different and interchangeable scenarios: 1) the clearance of cancer cells by immune cells, 2) an equilibrium between cancer and immune cells, and 3) the escape phase, with a prevalence of cancer cells over immune cells [1]. During tumor progression, cancer cells acquire specific biological characteristics that lead to immune tolerance, thus preventing or hampering tumor cell attack and killing by antitumor immune cells [2]. In particular, the overexpression of inhibitory immune checkpoints, which impair the anticancer immune response, and/or the release of immunosuppressive cytokines/chemokines are the most common mechanisms that cancer cells utilize to protect themselves from the attack of cytotoxic immune cells [3]. In addition to these mechanisms, genomic instability [4], antigen (ag) loss or downregulation of the ag-presenting machinery [5], the generation of cell hybrids in the tumor microenvironment (TME) [6], the release of extracellular vesicles (EVs) as powerful mediators of intercellular communication [7], and the hierarchical tumor organization arising from cancer stem cells (CSCs) could contribute to immune escape in human cancers [8].
CSCs represent a minor subset of malignant cells capable of unlimited self-renewal and differentiation that contribute to tumorigenesis and tumor aggressiveness, tumor heterogeneity, metastasis, and resistance to antitumor therapies [9,10]. Through asymmetric cell division, a process that underlines the unlimited self-renewal capabilities of CSCs, a single CSC can hierarchically reconstitute the whole cancer cell population, thus regenerating/reseeding the original tumor if implanted in a different organism or in a different site of the same organism; this programme has been defined as “clonal tumor initiation capacity” [9,11]. The ability to shift between different phenotypic cell states by adapting their transcriptome to changes in the surrounding microenvironment confers CSCs the potential to transdifferentiate and invade other tissues and organs, a process also referred to as epithelial-mesenchymal transition (EMT) [12]. Moreover, while cytotoxic agents target the bulk of highly proliferating tumor cells, slowly cycling CSCs can resist chemotherapy and/or radiotherapy, finally resulting in aggressive/advanced treatment-refractory disease [13,14].
Recent studies suggest that CSCs could be crucial players in cancer immune escape; indeed, because of their immunomodulating properties, they can evade immunosurveillance and remain in a quiescent state, thus preventing lethal attack by antitumor immune cells [15,16,17]. Conversely, specific intratumor immune cell populations of the tumor niche interact with CSCs, thus affecting their functional status [18,19]. This biological crosstalk between CSCs and host immunity could represent a new “evil axis” responsible for primary or acquired tumor resistance to immunotherapy, thus paving the way for new therapeutic approaches based on the combination of anti-CSC treatments with immune checkpoint inhibitors (ICIs). In addition, cell–cell fusion, a process that under pathological conditions generates hybrids of tumor cells with diverse types of microenvironmental fusogenic cells, including bone marrow-derived and mesenchymal stem/multipotent stromal cells, macrophages, and fibroblasts, contributes to the formation of aberrant cells with tumor stem cell-like properties associated with tumor initiation, progression, and metastasis [6,20,21]. In general, cell fusion is a genetically regulated process, but external factors, such as hypoxia, inflammation, and mediators of intercellular communication, may also be involved in cell hybrid generation. In particular, it has been reported that EVs, including exosomes, may transport biological cargoes that could to some extent favor cell fusion and the formation of cancer hybrid stem cells that, in turn, promote tumor proliferation, immune evasion, and invasiveness [6]. Notably, EVs have also been found to exert a bidirectional role—EVs from CSCs to the TME and EVs from the TME to CSCs—in different solid cancers, such as breast, colon, lung, and prostate cancers, possibly promoting the development of premetastatic niches [7].
To further complicate this interactive scenario, epigenetic perturbations could also significantly contribute to CSC-related immune escape mechanisms [22]. Indeed, epigenetic modifications of both CSCs and differentiated cancer cells may lead to changes in the gene expression of immune-related genes, which can impact antigen processing/presentation and immune evasion. For instance, demethylating agents may enable re-expression of immune-related genes with potential for therapeutic impact, especially in the setting of combination treatment with immunotherapy [23].
In this review, we aim to highlight specific immunological traits of CSCs, pointing out how an immunosuppressive phenotype can promote tumor aggressiveness, stemness enrichment, and immunotherapy resistance.

3. Immunomodulatory Molecules Stimulating Tumor Stemness: The Dark Side of CSCs

CSCs are involved in bidirectional crosstalk with protumor or antitumor immune cells. Specific factors that are produced by CSCs to inhibit antitumor immunity also sustain CSC maintenance/activity, thus increasing tumor aggressiveness: a “direct mechanism” from CSCs to immune cells. Conversely, populations of tumor-infiltrating immune cells regulate CSCs by establishing physical interactions with them or through the release of soluble factors, such as cytokines: a “reverse mechanism” from immune cells to CSCs (Figure 2).
Regarding the “direct mechanism”, CD200 expression by CSCs not only inhibits immune system activation (see the previous section) but also sustains stemness enrichment by stimulating the expression of Bmi1 and Shh, two molecules implicated in Hedgehog signaling [59,60] (Figure 2). Moreover, ectopic CD200 expression induces EMT-related genes, enhanced resistance to radiotherapy, and invasiveness in head and neck squamous cell carcinoma and skin tumors [61,62].
PD-L1 expression by cancer cells has also been associated with enhanced stemness potential in different oncotypes. In particular, Almozyan S et al. demonstrated that PD-L1 expression in breast cancer was associated with resistance to chemotherapy and with the induction of EMT [63]. In this study, the authors revealed that PD-L1-silenced breast cancer cells formed mammospheres with significantly decreased efficiency and displayed impaired in vivo tumor-forming capacity when injected in mice in limiting dilution conditions, thus providing evidence for a regulatory role of PD-L1 in CSC self-renewal [63]. In addition, the same authors also reported a direct role of PD-L1 in controlling the expression of the stemness-related factors OCT4, Nanog, and BMI1 [63] (Figure 2). Together, these data indicate that PD-L1 expression in cancer cells not only inhibits antitumor immunity but also may contribute to the maintenance of stemness potential. Consistent with this model, Wei F et al. demonstrated the existence of crosstalk between PD-L1 and the Hedgehog signaling pathway that is mediated through a direct interaction between PD-L1 and HMGA1 [64]. In this study, PD-L1 increased the frequency of intratumor CSCs and contributed to the maintenance of tumor cell self-renewal [64]. Additionally, CTLA4, another immune checkpoint protein that inhibits T cell proliferation, activation, and anticancer immune response [65], was shown to increase the stemness potential in melanoma cells [66] (Figure 2). Indeed, CTLA-4 has a specific role in maintaining stem cell activity, and its inhibition with specific anti-CTLA-4 mAbs suppressed crucial CSC properties, including sphere-forming capability and in vivo tumorigenic potential [66].
Regarding the “reverse mechanism”, soluble inflammatory cytokines released into the TME by tumor-infiltrating immune cells could modulate CSC activities as well. For instance, the soluble factor IL-1 promoted Th-1 to Th-2 differentiation, thus contributing to the inhibition of antitumor immunity [67,68]. In particular, IL-1β stimulated the expression of the CSC-related marker ZEB1, induced resistance to chemotherapy, and increased sphere-forming efficiency in colon cancer cells, thus supporting a role for IL-1β in promoting CSC self-renewal and EMT [69]. In pancreatic cancer, KRAS-driven signaling activates an intrinsic inflammatory programme by activating the CSC-related NF-κB signaling pathway, which in turn stimulates the production of cytokines of the IL-1 family that promote early tumor invasiveness, EMT, angiogenesis, and metastasis [70]. Other proinflammatory cytokines, such as IL-6 and IL-8, could increase the number and activation of specific CSC subpopulations. In particular, IL-6 can act intrinsically on tumor cells, but it can also stimulate antitumor adaptive immunity [71]. IL-6 stimulates the expression of genes involved in stemness, invasion, migration, and tumorigenesis through a mechanism that involves its interaction with STAT3 [72,73]. IL-6 also causes resistance to chemotherapy, a process strongly linked to CSC enrichment, in different tumor types, including renal and ovarian carcinomas [74,75]. IL-8, a proinflammatory cytokine able to convert the anticancer immune response into an immunosuppressive response through its binding with CXCR1/2 receptors [76], is also involved in the acquisition and/or maintenance of stemness features in lung, renal, pancreatic, and breast cancers [77,78]. In particular, the inhibition of the IL-8/CXCR1/2 axis efficiently targets the CSC compartment in pancreatic cancer [78], and the combination of repertaxin, an antagonist of the CXCR1 receptor, with lapatinib, a tyrosine kinase inhibitor that halts HER2-mediated signaling, impairs mammosphere formation by HER2-positive cancer cells more efficiently than repertaxin or lapatinib monotherapy [79]. In this complex scenario, tumor necrosis factor (TNF)-α, a potent proinflammatory cytokine with putative suppressive effects in antitumor immunity and that has been reported to be involved in the expansion of T-reg cells [80], is implicated in the regulation of CSC-related features. In particular, TNF-α promotes cancer invasion and metastasis associated with the EMT programme in colorectal cancer [81]. Furthermore, milk fat globule epidermal growth factor-8 (MGF-E8), a secreted mediator of local immune suppression that stimulates T-reg cell infiltration and suppresses the Th-1 response and NK cell and CD8+ T cell cytotoxicity [82], was also found to enhance tumor cell survival, invasion, and angiogenesis and to modulate CSC activity. Specifically, in colon cancer, MGF-E8 released by TAMs induces the activation of the Hedgehog pathway, driving melanoma progression [83]. All these considerations indicate that an immunosuppressive TME not only affects the function of intratumor immune cells but also has an impact on CSC number and activation status.

In this review, we have discussed the growing body of current scientific evidence linking CSC biological, immunological, and epigenetic features to tumor resistance to immunotherapy. A better understanding of the molecular mechanisms regulating the dynamic interplay between cells in the TME and CSCs could pave the way for future anticancer therapies aimed at targeting CSCs by reversing intratumor immunosuppression. 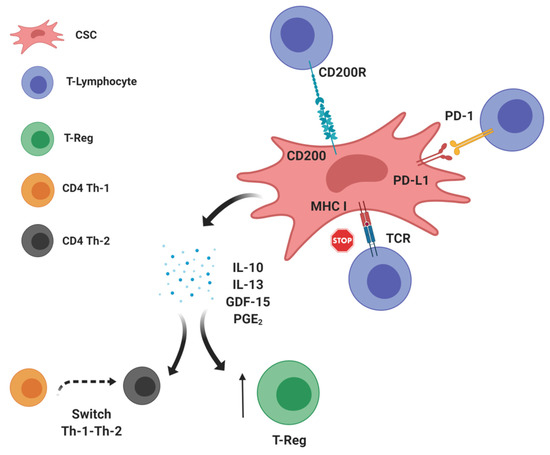 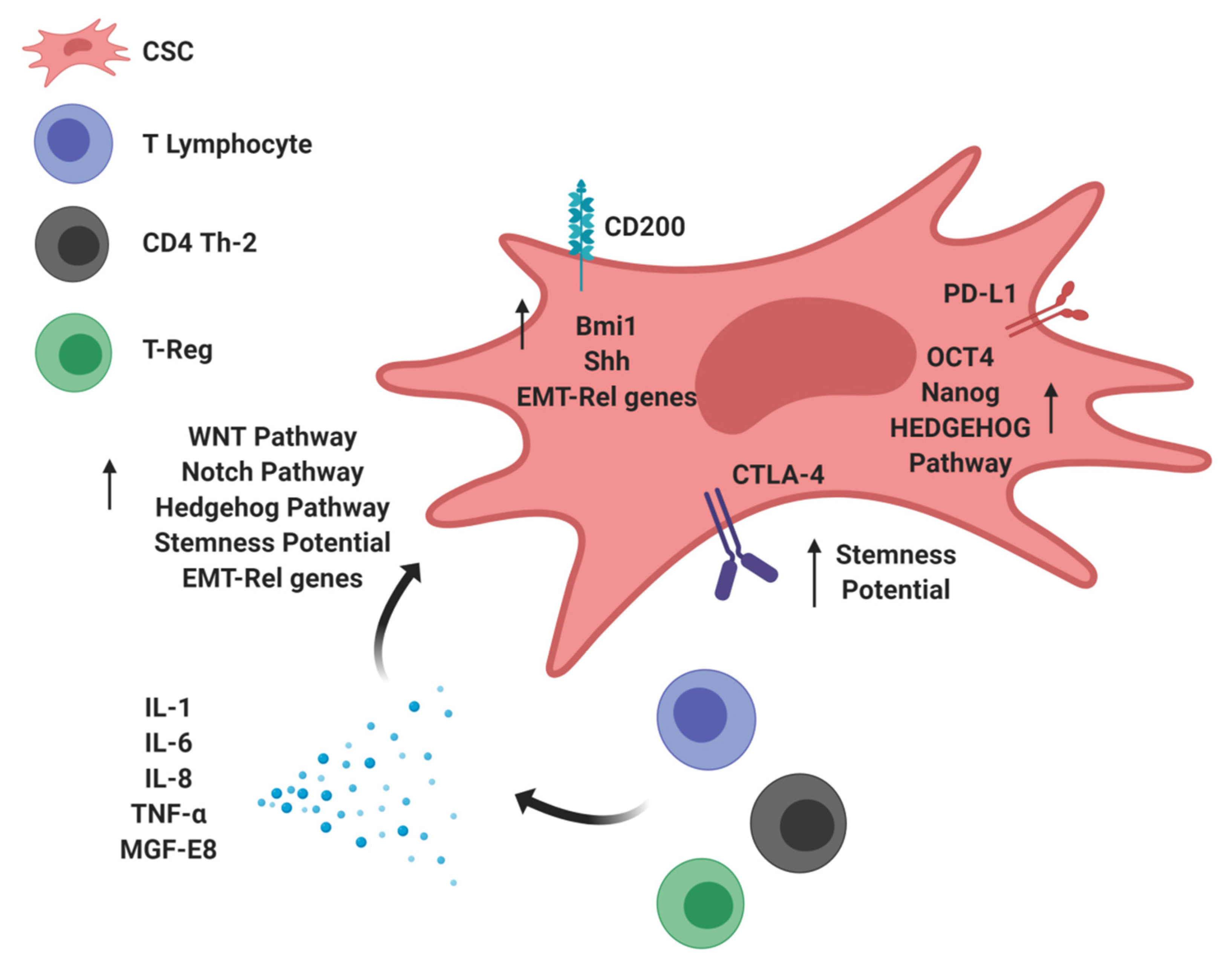 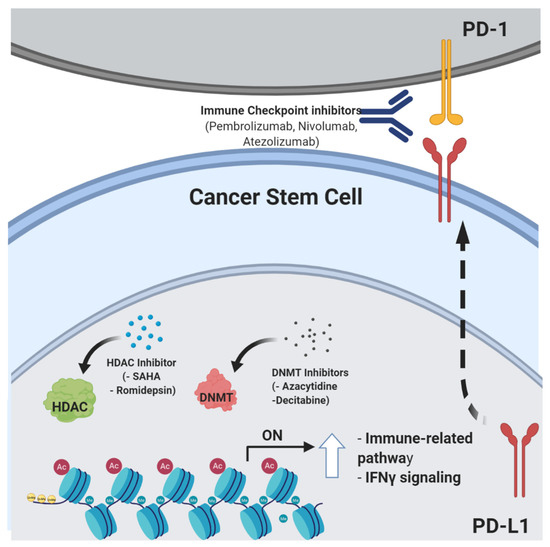