Armando A. Genazzani
1 and

(1) Background: Extracellular nicotinamide phosphoribosyltrasferase (eNAMPT) is released by various cell types with pro-tumoral and pro-inflammatory properties. In cancer, eNAMPT regulates tumor growth through the activation of intracellular pathways, suggesting that it acts through a putative receptor, although its nature is still elusive. It has been shown, using surface plasma resonance, that eNAMPT binds to the C-C chemokine receptor type 5 (CCR5), although the physiological meaning of this finding is unknown. The aim of the present work was to characterize the pharmacodynamics of eNAMPT on CCR5. (2) Methods: HeLa CCR5-overexpressing stable cell line and B16 melanoma cells were used. We focused on some phenotypic effects of CCR5 activation, such as calcium release and migration, to evaluate eNAMPT actions on this receptor. (3) Results: eNAMPT did not induce ERK activation or cytosolic Ca2+-rises alone. Furthermore, eNAMPT prevents CCR5 internalization mediated by Rantes. eNAMPT pretreatment inhibits CCR5-mediated PKC activation and Rantes-dependent calcium signaling. The effect of eNAMPT on CCR5 was specific, as the responses to ATP and carbachol were unaffected. This was strengthened by the observation that eNAMPT inhibited Rantes-induced Ca2+-rises and Rantes-induced migration in a melanoma cell line. (4) Conclusions: Our work shows that eNAMPT binds to CCR5 and acts as a natural antagonist of this receptor. View Full-Text
Keywords: eNAMPT; visfatin; CCR5; antagonism; cancer; calcium signaling; migration eNAMPT; visfatin; CCR5; antagonism; cancer; calcium signaling; migration
►▼ Show Figures 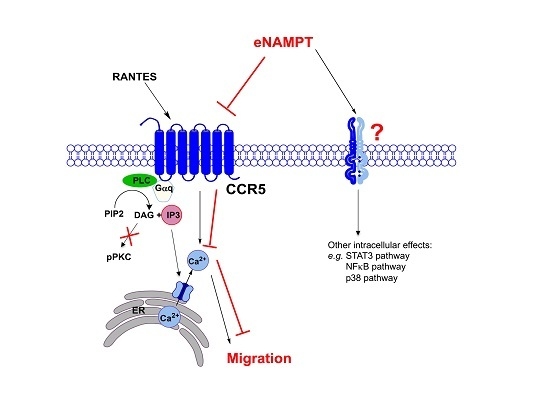